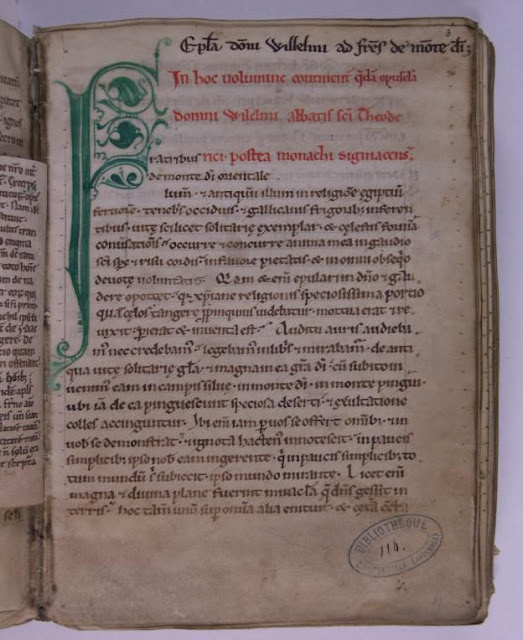 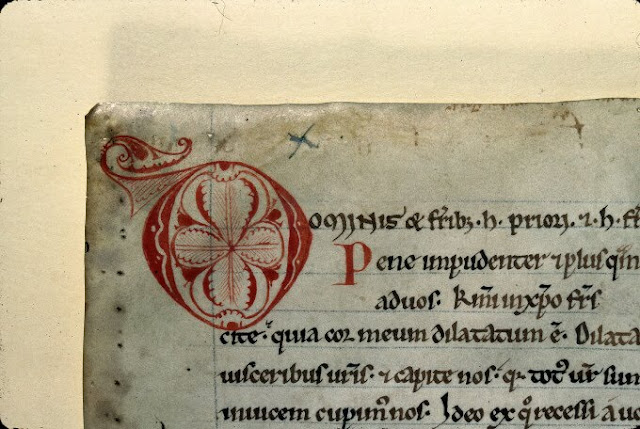 "[W]e can distinguish two elements [about medieval monasticism]: the knowledge of letters and the search for God. The fundamental fact that stands out in this domain is that one of the principal occupations of the monk is the lectio divina, which includes meditation ...

[M]onastic life is entirely disinterested; its reason for existing is to further the salvation of the monk, his search for God, and not for any practical or social end ...

Medieval monastic literature is, in large part, a literature of compunction, whose aim is to possess, to increase, and to communicate the desire for God. And this fact opens up to us a whole conception of monastic culture and of monastic life. The latter is considered as an anticipation of celestial life; it is a real beginning of eternal life. Everything is judged according to its relationship with the final consummation of the whole of reality. The present is a mere interlude."

The above images are from an ancient manuscript. It is of a work written by William of St-Thierry (1075-1148) called the Letter to the Brothers of Mont-Dieu (The Golden Epistle).

The original work was written in 1145 after William had returned from a visit to the Carthusian Monastery of Mont-Dieu in the Ardennes.

The above manuscript was at that time kept at the Monastery of Notre-Dame, at Signy which was the monastery of which Wiliam was Abbot and in which he died.

The manuscript above is the oldest extant manuscript of the work. It is also notable for the fact that the author himself has made a number of corrections in his own hand

Filled with wise counsel and prudent directives, the work is an apology for the Carthusian order and way of life, a vision of the perfect hermit and hermitage, a manua of asceticism and a treatise on the mystical life. It describes in one part the material duties of the ascetic; in the other part the way to perfection.

When the Abbey at Signy was sacked at the French Revolution, luckily the manuscript made its way to Charleville for safekeeping and into the care of Abbé Grégoire (1750-1831)

Likewise the Carthusian monastery at Mont-Dieu survived until the Revolution when it was destroyed. The pictures below are of the site of the medieval Chartreuse or Charterhouse. 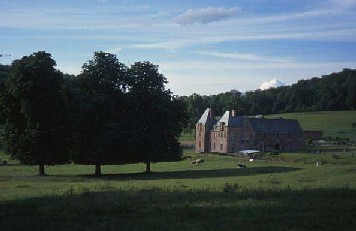 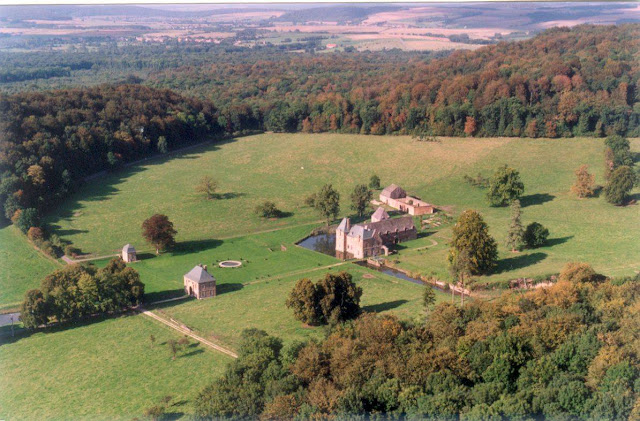 The Holy Father on 2nd December 2009 continued his catechesis on medieval figures of note with a talk on William of St-Thierry (1075-1148). One part of his talk was devoted to the Letter to the Brothers of Mont-Dieu (The Golden Epistle). This is what he said:

"A synthesis of the thought of William of Saint-Thierry is contained in a long letter addressed to the Carthusians of Mont-Dieu, to whom he had gone on a visit and who he wished to encourage and console. The learned Benedictine Jean Mabillon already in 1690 gave this letter a significant title: "Epistola aurea" (Golden Epistle).

In fact, the teachings on the spiritual life contained in it are noteworthy for all those who wish to grow in communion with God, in sanctity. In this treatise William proposes an itinerary in three stages. One must pass, he says, from "animal" man to "rational" man," to come to "spiritual" man. What does our author intend to say with these three expressions?

At the beginning, a person accepts the vision of life inspired by faith with an act of obedience and trust. Then with a process of interiorization, in which reason and will play a great role, faith in Christ is received with profound conviction and one feels a harmonious correspondence between this real and satisfying communion with God.

One lives only in love and for love.

William bases this itinerary on a solid vision of man, inspired by the ancient Greek Fathers, above all Origen, who, with an intrepid language, taught that man's vocation is to become like God, who created him in his image and likeness. The image of God present in man drives him toward likeness, namely, toward an ever fuller identity between his own will and the divine will. One does not attain to this perfection, which William calls "unity of spirit," with personal effort, even if it is sincere and generous, because another thing is necessary.

This perfection is attained by the action of the Holy Spirit, who makes his dwelling in the soul and purifies, absorbs and transforms in charity every outburst and every desire of love present in man. "There is then another likeness with God," we read in the "Epistola aurea," "which is no longer called likeness but unity of spirit, when man becomes one with God, one spirit, not only by the unity of an identical will, but by not being able to will something other. Thus man merits to become not God, but that which God is: Man becomes by grace that which God is by nature" (Epistola aurea 262-263, SC 223, pp. 353-355)."