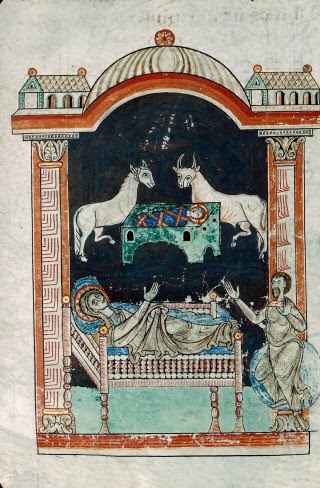 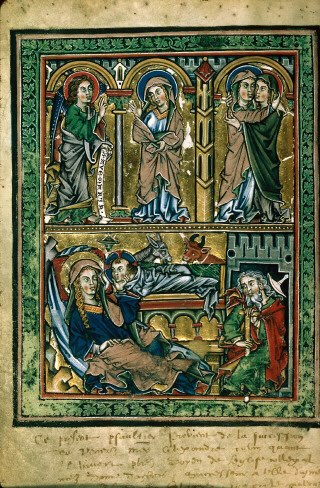 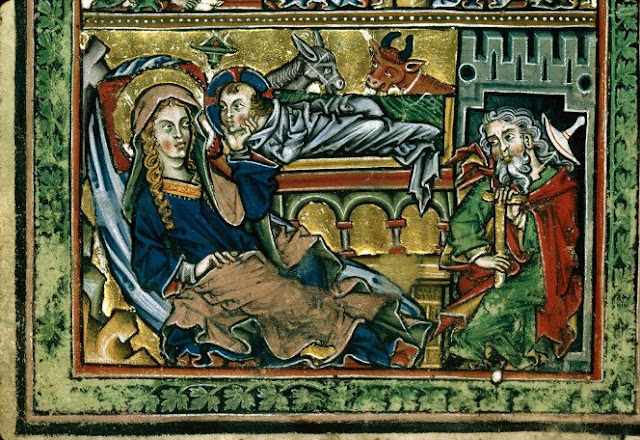 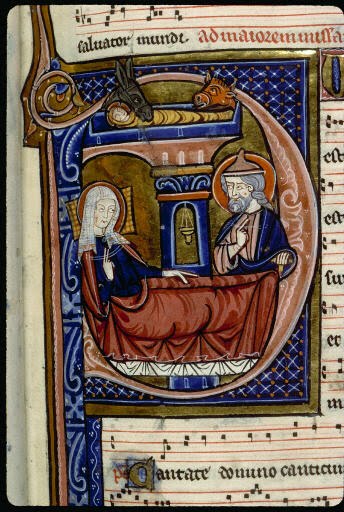 The workshop of Nicolas Lombard

"Taught by the theologian, the thirteenth century artist saw in the Gospel not a collection of picturesque or affecting scenes, but a succession of mysteries. ...

First of all the Nativity. The thirteenth century, faithful in other respects to the tradition of previous centuries, represents the birth of Jesus after a fashion which could not fail to strike us as curious did we but take the trouble to observe it.

This scene, so often reproduced in windows, has in it nothing tender, one might almost say nothing human. The Madonna of the Italian quattrocentists kneels before the child, gazing at Him with clasped hands, the personification of infinite love.

In thirteenth century art Mary, lying on her bed and regardless of her Son, looks intently before her at some invisible object. The child does not lie in a manger, but curiously enough on a raised altar, which occupies the whole central portion of the composition. Above His head a lamp is seen hanging between parted curtains. The scene appears to take place not in a stable but in a church

It is indeed to a church that the artist-theologian of the Middle Ages would direct men's minds, for it seems he would tell us that from the moment of birth Jesus must have the semblance of a victim. The cradle in which he sleeps, says the Gloss, is the very altar of sacrifice.

Before such a mystery even maternal love is stilled. Mary keeps a religious silence and ponders, say the commentators, the words of prophets and angels which had even now come to pass. St. Joseph shares her silence, and motionless, with fixed gaze, the two are wrapt in solemn contemplation. So imposing and entirely theological a conception is far removed from the picturesque "cribs" which made their appearance at the beginning of the fifteenth century, and which mark the end of great religious art."

Émile Mâle, Religious Art in France in the Thirteenth Century (translated from the third edition revised and enlarged by Dora Nussey 1913) pages 184-185