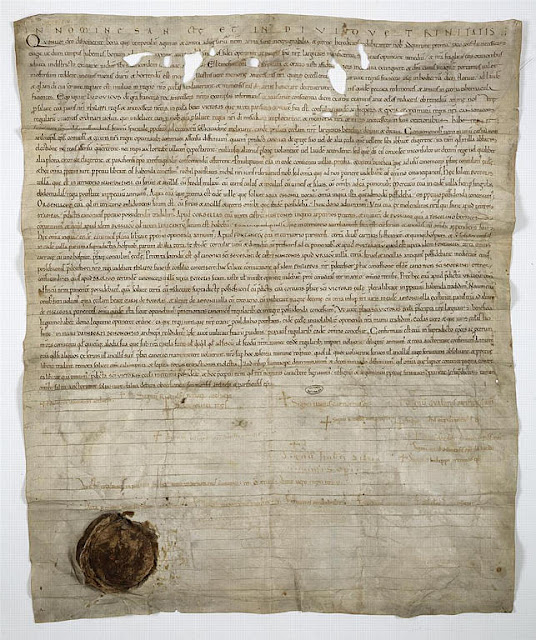 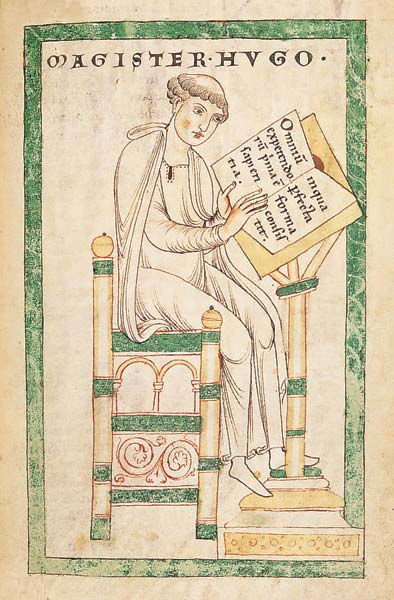 The Division of Knowledge

In Didascalicon (end of C12th and beginning of C13th)

Hugh of St Victor (1096 - 11 February 1141) was a philosopher, theologian, and a religious mystic. He was of the Abbey of St. Victor, Paris, otherwise the Royal Abbey and School of St. Victor. Hence the name.

The abbey was of Augustinian canon regulars.

He has been styled a " Second Augustine " (" alter Augustinus ")

His body of work is considerable. It occupies three volumes of Migne`s Patrologie Latine

His works have survived in hundreds of libraries all across Europe. The very survival of these works—and their commonness—show how influential Hugh’s writing was

His most important work is De sacramentis christianae fidei (1136 -1141)

On 25th November 2009 Pope Benedict XVI continued his catechesis on "exemplary figures" from the past who were determined to show "harmony between faith and reason".

On that Wednesday he spoke about Hugh of St Victor, one of the "Victorines".

In these talks which the Pope obviously enjoys giving, one sees a master teacher in action.

His talks are erudite and not condescending.

He obviously feels that there is a need to educate people about the rich Catholic heritage of Europe which has been forgotten and is rarely taught, spoken about or remembered.

The explosion of Higher Education in the Western World is a phenomenon, probably unparalleled in history. The talks by Benedict seem to be pitched at these students and the graduates.

Many go to University for different reasons: the lack of an alternative; to further career choices. Many do not go for the traditional reasons: love of learning and to develop intellectually and spiritually. If they do go for traditional reasons they will be taught relativism and the virtue of progress. Medievalism is quite passe and only for a very small minority. An even smaller minority go on to study philosophy and even less theology.

Many university courses have a narrow focus and concentrate on matters like business studies, media studies et cetera where the historical and philosophical element may not be large.

Amongst other things, this is a gap which the Holy Father is aiming to fill. He wants to encourage further reading and study on the subjects which he touches on in his talks.

"Today I would like to speak to you about Hugh and Richard of St. Victor. Both are among those notable philosophers and theologians known by the name of Victorines, because they lived in the Abbey of St. Victor in Paris, founded at the beginning of the 12th century by William of Champeaux.

William himself was a renowned teacher, who was able to give his abbey a solid cultural identity. In fact, inaugurated in St. Victor was a school for the formation of monks, open also to outside students, where a happy synthesis was made between the two forms of doing theology, of which I have already spoken in previous catecheses: namely, monastic theology, mainly oriented to the contemplation of the mysteries of the faith in Scripture, and scholastic theology, which used reason to attempt to scrutinize these mysteries with innovative methods, to create a theological system.

We know little about the life of Hugh of St. Victor. The date and place of his birth are uncertain: perhaps in Saxony or in Flanders. It is known that he arrived in Paris -- the European capital of culture at the time -- and spent the rest of his years in the abbey of St. Victor, where he was first a disciple and then a teacher.

Already before his death, which occurred in 1141, he achieved great notoriety and esteem, to the point of being called a "second St. Augustine": Like Augustine, in fact, he meditated much on the relation between faith and reason, between profane sciences and theology.

According to Hugh of St. Victor, all sciences, in addition to being useful to understand the Scriptures, have value in themselves and should be cultivated to enhance man's learning, and also to correspond to his desire to know the truth.

This healthy intellectual curiosity induced him to recommend to students that they never stifle the desire to learn and -- in his treatise on the methodology of learning and pedagogy, titled significantly Didascalicon (on teaching) -- he recommended: "Learn happily from everyone what you do not know. He will be the wisest of all who has desired to learn something from all. He who receives something from everyone, ends us by being the richest of all" (Eruditiones Didascalicae, 3,14: PL 176,774).

The science that concerns the philosophers and theologians of the Victorines is, in a particular way, theology, which requires first of all the loving study of sacred Scripture. To know God, in fact, one cannot but begin from what God himself has wished to reveal of himself through the Scriptures. In this connection, Hugh of St. Victor is a typical representative of monastic theology, totally based on biblical exegesis.

To interpret Scripture, he proposes the traditional Patristic-Medieval articulation, that is, the historical/literal sense, first of all, then the allegorical and analogical, and finally the moral.

These are four dimensions of the meaning of Scripture that also today are being rediscovered, because it is seen that in the text and the narration is hidden a more profound indication: the thread of faith, which leads us on high and guides us on this earth, teaching us how to live. However, while respecting these four dimensions of the meaning of Scripture, in an original way in relation to his contemporaries, he insists -- and this is something new -- on the importance of the historical/literal meaning.

In other words, before discovering the symbolic value, the more profound dimensions of the biblical text, it is necessary to know and reflect further on the meaning of the history narrated in Scripture. Otherwise, he warns with an effective example, the risk is run of being like grammar scholars who ignore the alphabet. For those who know the meaning of the history described in the Bible, the human circumstances seem marked by Divine Providence, according to a well-ordered plan.

Thus, for Hugh of St. Victor, history is not the result of a blind destiny or an absurd case, as it might seem. On the contrary, the Holy Spirit operates in human history, arousing a wonderful dialogue of men with God, their friend. This theological view of history makes evident the surprising and salvific intervention of God, who really enters and acts in history, almost makes himself part of our history, but always safeguarding and respecting man's liberty and responsibility.

For our author, the study of sacred Scripture and its historical/literal meaning makes possible true and authentic theology, that is, the systematic illustration of truths, to know their structure, the illustration of the dogmas of the faith, which he represents in a solid synthesis in the treatise De sacramentis christianae fidei (The sacraments of the Christian faith).

There is found, among other things, a definition of "sacrament" that, subsequently perfected by other theologians, has features that even today are very interesting.

"The sacrament," he writes, "is a corporeal or material element proposed in a strange and sensible way, which represents with its similarity an invisible and spiritual grace, it signifies it, because it was instituted for this purpose, and contains it, because it is capable of sanctifying" (9,2: PL 176,317). On one hand the visibility of the symbol,the "corporeal nature" of the gift of God, in which however, on the other hand, is hidden divine grace that comes from a history: Jesus Christ himself has created the fundamental symbols.

Hence, three are the elements that concur in the definition of a sacrament, according to Hugh of St. Victor, the institution on the part of Christ, the communication of grace, and the analogy between the visible, material element and the invisible element, which are the divine gifts. It is a vision that is very close to contemporary sensibility, because the sacraments are presented with a language interlaced with symbols and images capable of speaking immediately to men's heart.

Also important today is that the liturgical leaders, and in particular priests, appreciate with pastoral wisdom the signs themselves of the sacramental rites -- this visibility and tangibility of grace -- paying careful attention to their catechesis, so that each celebration of the sacraments is lived by all the faithful with devotion, intensity and spiritual joy."