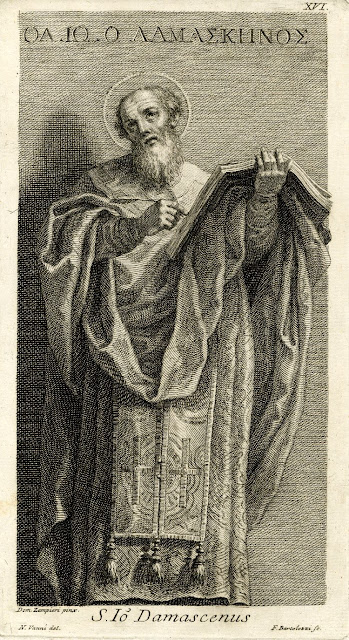 December 4th is the feast day of Arab Christian monk and priest and Doctor of the Church, Saint John of Damascus (Iohannes Damascenus; also known as John Damascene)

It has been said that St. John Damascene (born at Damascus c.676, died c.760), was not a particularly original thinker, but was a notable for his encyclopaedic compilations of existing theological writings.

'The Orthodox Faith' is an example, in which he compiles and systematises the writings of ancient authors.

In the dispute about the veneration of images and their exhibition in public places, he defended holy images in three separate publications.

Shorty before undertaking his Apostolic Visit to Jordan, Israel and the Palestinian Territories earlier this year, Pope Benedict XVI delivered a lengthy homily on Saint John Damascene on Wednesday, 6 May 2009

It seems to touch on a number of chords common in the teaching of His Holiness:

* the use of religious art especially icons: the difference between worship and veneration

* Veneration of Saints and their relics

* the commonaity between philosophy and theology

Today I should like to speak about John Damascene, a personage of prime importance in the history of Byzantine Theology, a great Doctor in the history of the Universal Church. Above all he was an eyewitness of the passage from the Greek and Syrian Christian cultures shared by the Eastern part of the Byzantine Empire, to the Islamic culture, which spread through its military conquests in the territory commonly known as the Middle or Near East.

John, born into a wealthy Christian family, at an early age assumed the role, perhaps already held by his father, of Treasurer of the Caliphate. Very soon, however, dissatisfied with life at court, he decided on a monastic life, and entered the monastery of Mar Saba, near Jerusalem. This was around the year 700. He never again left the monastery, but dedicated all his energy to ascesis and literary work, not disdaining a certain amount of pastoral activity, as is shown by his numerous homilies.

His liturgical commemoration is on the 4 December. Pope Leo XIII proclaimed him Doctor of the Universal Church in 1890.

In the East, his best remembered works are the three Discourses against those who calumniate the Holy Images, which were condemned after his death by the iconoclastic Council of Hieria (754). These discourses, however, were also the fundamental grounds for his rehabilitation and canonization on the part of the Orthodox Fathers summoned to the Council of Nicaea (787), the Seventh Ecumenical Council. In these texts it is possible to trace the first important theological attempts to legitimise the veneration of sacred images, relating them to the mystery of the Incarnation of the Son of God in the womb of the Virgin Mary.

John Damascene was also among the first to distinguish, in the cult, both public and private, of the Christians, between worship (latreia), and veneration (proskynesis): the first can only be offered to God, spiritual above all else, the second, on the other hand, can make use of an image to address the one whom the image represents.

Obviously the Saint can in no way be identified with the material of which the icon is composed. This distinction was immediately seen to be very important in finding an answer in Christian terms to those who considered universal and eternal the strict Old Testament prohibition against the use of cult images. This was also a matter of great debate in the Islamic world, which accepts the Jewish tradition of the total exclusion of cult images. Christians, on the other hand, in this context, have discussed the problem and found a justification for the veneration of images.

John Damascene writes, "In other ages God had not been represented in images, being incorporate and faceless. But since God has now been seen in the flesh, and lived among men, I represent that part of God which is visible. I do not venerate matter, but the Creator of matter, who became matter for my sake and deigned to live in matter and bring about my salvation through matter. I will not cease therefore to venerate that matter through which my salvation was achieved. But I do not venerate it in absolute terms as God! How could that which, from non-existence, has been given existence, be God?... But I also venerate and respect all the rest of matter which has brought me salvation, since it is full of energy and Holy graces. Is not the wood of the Cross, three times blessed, matter?... And the ink, and the most Holy Book of the Gospels, are they not matter? The redeeming altar which dispenses the Bread of life, is it not matter?... And, before all else, are not the flesh and blood of Our Lord matter? Either we must suppress the sacred nature of all these things, or we must concede to the tradition of the Church the veneration of the images of God and that of the friends of God who are sanctified by the name they bear, and for this reason are possessed by the grace of the Holy Spirit. Do not, therefore, offend matter: it is not contemptible, because nothing that God has made is contemptible" (cf. Contra imaginum calumniatores, I, 16, ed. Kotter, pp. 89-90).

We see that as a result of the Incarnation, matter is seen to have become divine, is seen as the habitation of God. It is a new vision of the world and of material reality. God became flesh and flesh became truly the habitation of God, whose glory shines in the human Face of Christ. Thus the arguments of the Doctor of the East are still extremely relevant today, considering the very great dignity that matter has acquired through the Incarnation, capable of becoming, through faith, a sign and a sacrament, efficacious in the meeting of man with God.

John Damascene remains, therefore, a privileged witness of the cult of icons, which would come to be one of the most distinctive aspects of Eastern spirituality up to the present day. It is, however, a form of cult which belongs simply to the Christian faith, to the faith in that God who became flesh and was made visible. The teaching of Saint John Damascene thus finds its place in the tradition of the universal Church, whose sacramental doctrine foresees that material elements taken from nature can become vehicles of grace by virtue of the invocation (epiclesis) of the Holy Spirit, accompanied by the confession of the true faith.

John Damascene extends these fundamental ideas to the veneration of the relics of Saints, on the basis of the conviction that the Christian Saints, having become partakers of the Resurrection of Christ, cannot be considered simply "dead". Numbering, for example, those whose relics or images are worthy of veneration, John states in his third discourse in defence of images: "First of all (let us venerate) those among whom God reposed, he alone Holy, who reposes among the Saints (cf. Is 57: 15), such as the Mother of God and all the Saints. These are those who, as far as possible, have made themselves similar to God by their own will; and by God's presence in them, and his help, they are really called gods (cf. Ps 82[81]: 6), not by their nature, but by contingency, just as the red-hot iron is called fire, not by its nature, but by contingency and its participation in the fire. He says in fact : you shall be holy, because I am Holy (cf. Lv 19: 2)" (III, 33, col. 1352 a).

After a series of references of this kind, John Damascene was able serenely to deduce: "God, who is good, and greater than any goodness, was not content with the contemplation of himself, but desired that there should be beings benefited by him, who might share in his goodness: therefore he created from nothing all things, visible and invisible, including man, a reality visible and invisible. And he created him envisaging him and creating him as a being capable of thought (ennoema ergon), enriched with the word (logo[i] sympleroumenon), and orientated towards the spirit (pneumati teleioumenon)" (II, 2, pg 94, col. 865a).

And to clarify this thought further, he adds: "We must allow ourselves to be filled with wonder (thaumazein) at all the works of Providence (tes pronoias erga), to accept and praise them all, overcoming any temptation to identify in them aspects which to many may seem unjust or iniquitous, (adika), and admitting instead that the project of God (pronoia) goes beyond man's capacity to know or to understand (agnoston kai akatalepton), while on the contrary only he may know our thoughts, our actions, and even our future" (ii, 29, pg 94, col. 964c).

The optimism of the contemplation of nature (physike theoria), of seeing in the visible creation the good, the beautiful, the true, this Christian optimism, is not ingenuous: it takes account of the wound inflicted on human nature by the freedom of choice desired by God and misused by man, with all the consequences of widespread discord which have derived from it.

From this derives the need, clearly perceived by John Damascene, that nature, in which the goodness and beauty of God are reflected, wounded by our fault, "should be strengthened and renewed" by the descent of the Son of God in the flesh, after God had tried in many ways and on many occasions, to show that he had created man so that he might exist not only in "being", but also in "well-being" (cf. The Orthodox Faith, II, 1, pg 94, col. 981).

With passionate eagerness John explains: "It was necessary for nature to be strengthened and renewed, and for the path of virtue to be indicated and effectively taught (didachthenai aretes hodòn), the path that leads away from corruption and towards eternal life.... So there appeared on the horizon of history the great sea of love that God bears towards man (philanthropias pelagos)"....

It is a fine expression. We see on one side the beauty of Creation, and on the other the destruction wrought by the fault of man. But we see in the Son of God, who descends to renew nature, the sea of love that God has for man. John Damascene continues: "he himself, the Creator and the Lord, fought for his Creation, transmitting to it his teaching by example.... And so the Son of God, while still remaining in the form of God, lowered the skies and descended... to his servants... achieving the newest thing of all, the only thing really new under the sun, through which he manifested the infinite power of God" (III, 1, pg 94, col. 981c-984b).

We may imagine the comfort and joy which these words, so rich in fascinating images, poured into the hearts of the faithful. We listen to them today, sharing the same feelings with the Christians of those far-off days: God desires to repose in us, he wishes to renew nature through our conversion, he wants to allow us to share in his divinity. May the Lord help us to make these words the substance of our lives. "