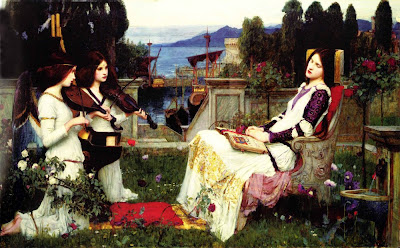 Richard Dorment in The Telegraph in his review of the Royal Academy's new exhibition. John William Waterhouse (1849-1917) poses an interesting question.

What is it that makes one artist so much more interesting as an artist than other artists ?

Waterhouse`s work is slick and professional, he was a remarkable draftsman. But according to Dorment, “completely empty of real feeling or thought. A pleasant void.”

What makes Rossetti or Burne-Jones so much more interesting as artists than Waterhouse, Lucian Freud more intense and compelling than Jack Vettriano?

“The quality isn't tangible – imaginative vision and originality, of course, but emotional truth, involvement with their subjects, self-revelation, and psychological complexity also come into it.”

Other factors which he puts into the pot:

the abysmal quality of art education (e.g. in Victorian Britain in the 1860s);

the lack of originality or proper inspiration on the part of the artist;

a slavish mentality of copying what was commercially successful or done by others at the time; and

a proper and mature attitude of the artist especially in relation to sex.

The painting Saint Cecilia shows the 2nd or 3rd-century saint on a marble chair in a garden on the Italian coast. Waterhouse covered the canvas in gold ground so the painting appears to shimmer. He was inspired by Tennyson's 1833 poem The Palace of Art.

The painting Saint Cecilia was exhibited at the Royal Academy in 1895, with the quotation from Tennyson's 'The Palace of Art':

'In a clear walled city on the sea.
Near gilded organ pipes - slept St. Cecily'.

Note the poppies as emblems of sleep, and also of death. Angels play instruments in recognition of her being the patron saint of music.

In contrast to the contemporary reviewer above, the reviewer in The Art Journal wrote:

'.. in St Cecilia, the important work which represents nearly two years unremitting toil and experiment, the aim is wholly decorative, the colour superb, and the painting swift and direct; that of a man who has reached his goal. The feeling is entirely mediaeval... The effect is decorative first, then somewhat ecclesiastic; entirely removed from realism and the world of our daily life.'

For what it is worth, I think it a most beautiful painting, a masterpiece. What a pity it is not hanging over an altar to encourage veneration, contemplation and prayer.
Posted by Unknown at 8:17 pm