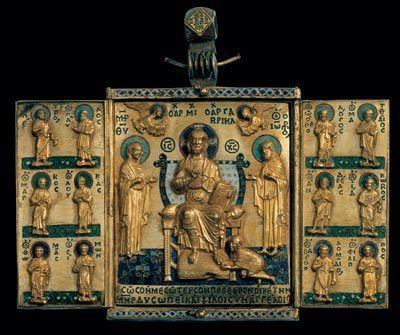 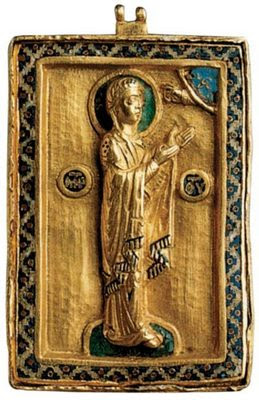 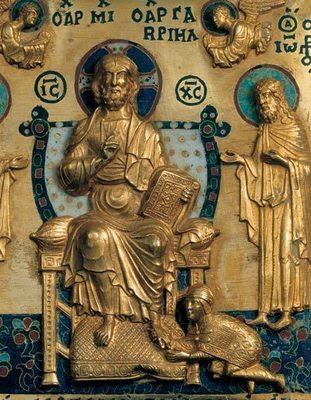 
The encolpion would have been worn around the neck of the wearer.

The central panel displays an image of the Deesis (‘Entreaty’ or ‘Petition’), in which the enthroned Christ is flanked by full-length figures of the Mother of God and St John the Baptist, their hands outstretched towards him in supplication.

There are also included half-figures of the archangels Michael and Gabriel, hovering above with their hands veiled, and on the inner wings of the triptych by standing figures of the 12 apostles.

On the left wing, there are Saints Peter and Paul, Mark and Luke, and Thomas and Simon are shown in pairs in three registers. On the right Saints John the Evangelist and Matthew, Andrew and James, and Bartholomew and Philip are shown in the same way

The locket belonged to Constantine proedros. He is probably the richly clothed figure of a man kneeling at the feet of Christ. He is addressing his prayer or petition to the Virgin and/or the Angels and Saints assembled

There is an inscription divided between three of the facets. The three facets read:

- O Saviour, save me, your servant the proedros
Your Mother beseeches you as do [your] friends and the ang

- O Saviour, save me, your servant the proedrosYour Mother beseeches you as do [your] friends and the angels


The title proedros denoted different things at different times, but in general it meant that its holder was the pre-eminent figure (or literally ‘president’) of a group. The title was originally carried by civilians or lay dignitaries as well as by bishops or heads of monasteries.

However, Constantine’s clothing makes it clear that he was not a cleric, but a senior lay figure

The age that he must have reached to attain the honour of proedros was such that even if he had shaved in his youth, as a senior member among his peers he would have been expected to be bearded.

We may assume that he was a eunuch, and in this respect he was in a long and honoured tradition of Byzantine life.

Eunuchs had existed in considerable numbers and occupied positions of great authority and success in Byzantine civil, religious and even military spheres; in some cases certain positions were even, until the 11th century, largely reserved for them

Like many other men of the Great City [Byzantium] , Constantine, after making his mark in the world, could in old age have become a monk and retired to a monastery.

It is thought that the encolpion may have been seized as booty hundreds of years ago and brought at that time to the West.

There are a number of features from the artistic and historical point of view which make this an object of some note.

But on another level, it is a remarkable object of private devotion of an individual whose name, achievements and life are now only known to God.
Posted by Unknown at 5:30 pm