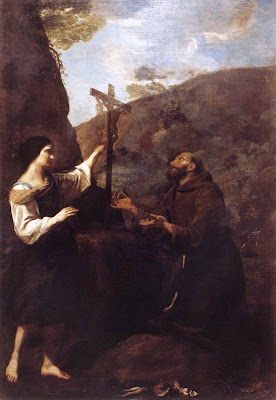 His biographer said of Sacchi:

"[He] worked with an uneasy mind; knowing perfectly well the difference between the good and the better, he was never content."

Sacchi was a slow worker but had a cerebral intellect. But he sometimes carried his didacticism to extremes

According to legend, Francis was walking in a street in Siena, when he encountered three similar women who represented the three virtues of the Franciscan order; poverty, chastity and obedience.

Francis greeted them extending a particular welcome to poverty, saying, "you are welcome, Lady Poverty".

The saint loved poverty and truly considered that virtue to be his wife: thus the legend of the saint's marriage to Poverty was born.

“At the root of the different expressions of Consecrated Life there is always a strong Gospel inspiration. I think of St Anthony Abbot who was moved by listening to Christ's words: "If you would be perfect, go, sell what you possess and give to the poor, and you will have treasure in heaven; and come, follow me" (Mt 19: 21) (cf. Vita Antonii, 2, 4). Anthony listened to these words as if they were addressed to him personally by the Lord.

St Francis of Assisi in his turn affirmed that it was God who revealed to him that he should live according to the form of the holy Gospel (Testament, 17; Franciscan Omnibus 116). "Francis", wrote Thomas of Celano, "who heard that Christ's disciples were supposed to possess neither gold, nor silver, nor money, nor purse; were to have neither bread nor staff, were to have neither shoes nor two tunics... rejoicing in the Holy Spirit said: "This is what I want! This is what I ask! This is what I want to do from the bottom of my heart!'" (I Celano 83; Franciscan Omnibus 670, 672 )

(From the address of Pope Benedict XVI on Saturday, 2 February 2008 at the Vatican Basilica)


“The Crib helps us contemplate the mystery of God's love that was revealed in the poverty and simplicity of the Bethlehem Grotto. St Francis of Assisi was so taken by the mystery of the Incarnation that he wanted to present it anew at Greccio in the living Nativity scene, thus beginning an old, popular tradition that still retains its value for evangelization today.

Indeed, the Crib can help us understand the secret of the true Christmas because it speaks of the humility and merciful goodness of Christ, who "though he was rich he made himself poor" for us (II Cor 8: 9).

His poverty enriches those who embrace it and Christmas brings joy and peace to those who, like the shepherds in Bethlehem, accept the Angel's words: "Let this be a sign to you: in a manger you will find an infant wrapped in swaddling clothes" (Lk 2: 12). This is still the sign for us too, men and women of the third millennium. There is no other Christmas.”

(From the Angelus talk of Pope Benedict XVI on III Sunday of Advent, 11 December 2005)