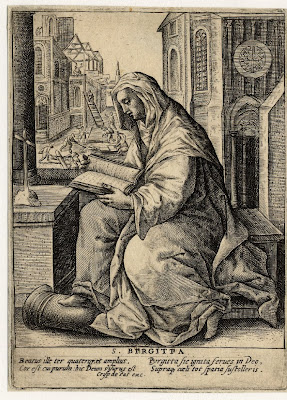 St Bridget (also known as St Brigitta of Sweden or St Birgitta) was devout noblewoman who founded the Order of Bridgettines.

She is the Patron saint of Sweden as well as co Patroness of Europe. She died in Rome and was canonized in the year 1391 by Pope Boniface IX, and confirmed by the Council of Constance in 1415.

Saint Bridget of Sweden recounted Christ's birth as it appeared to her in a vision. She spoke of His 'ineffable light and splendour…totally annihilating the material light'.

It is this vision which has influenced the depiction of the child in the manger in many paintings
Posted by Unknown at 9:07 pm