A Shared Vision Before Death in Ostia 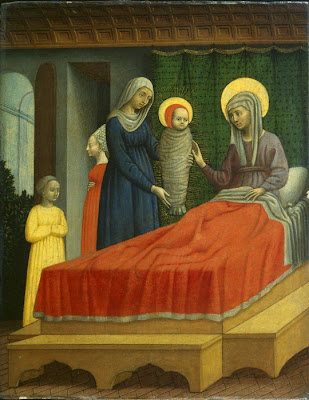 St Augustine`s Confessions, Book 9 details how in March 387, St Augustine, Alypius, and his son, Adeodatus, were all baptized in Milan. His state of happiness came to an end with the death of his son a short time later

After this, the group including his mother, Monica, decided to return to Africa to dedicate their lives to the service of God. On the way back to Thagaste, they stopped at Ostia, the port of Rome to await the boat to Africa.

At Ostia, while they were still waiting for the boat that would take them back, Augustine describes how he and his mother were looking out upon a garden in the house where they were staying in Ostia. While they are reflecting on the joys of the next life, the two have a joint mystical experience

The results of this vision at Ostia differed completely from that of the vision in Milan. As in the former vision, Augustine’s soul ascends upward towards "that region of never-failing plenty," where he briefly intuits the bliss of heavenly existence, though barely touching it with the "whole strength of [his] hearts’ impulse." The entire experience is described as "a moment of comprehension" (momentum intelligentiae) and ends as suddenly as it began with Augustine’s returning to his normal state.

This time at Ostia , however, the experience does not end in ever greater misery and despair, but rather a greater sense of peace and hope. As opposed to the first vision, in which he was pulled away from God by the weight (pondus) of how own carnal habit, the vision at Ostia reinforced his belief that the goods of the world, over which he had previously lusted, are nothing compared to the joy of resting in God for all eternity.

Shortly after their experience at Ostia, Monica fell into a fever and died at the age of 56. Augustine`s sorrow and pain was intense.

23. As the day now approached on which she was to depart this life--a day which you knew, but which we did not--it happened (though I believe it was by your secret ways arranged) that she and I stood alone, leaning in a certain window from which the garden of the house we occupied at Ostia could be seen. Here in this place, removed from the crowd, we were resting ourselves for the voyage after the fatigues of a long journey.

We were conversing alone very pleasantly and “forgetting those things which are past, and reaching forward toward those things which are future. We were in the present--and in the presence of Truth (which you are)--discussing together what is the nature of the eternal life of the saints: which eye has not seen, nor ear heard, neither has entered into the heart of man. We opened wide the mouth of our hearts, thirsting for those supernatural streams of your fountain, “the fountain of life” which is with you, that we might be sprinkled with its waters according to our capacity and might in some measure weigh the truth of so profound a mystery.

24. And when our conversation had brought us to the point where the very highest of physical sense and the most intense illumination of physical light seemed, in comparison with the sweetness of that life to come, not worthy of comparison, nor even of mention, we lifted ourselves with a more ardent love toward the Selfsame, and we gradually passed through all the levels of bodily objects, and even through the heaven itself, where the sun and moon and stars shine on the earth. Indeed, we soared higher yet by an inner musing, speaking and marvelling at your works.

And we came at last to our own minds and went beyond them, that we might climb as high as that region of unfailing plenty where you feed Israel forever with the food of truth, where life is that Wisdom by whom all things are made, both which have been and which are to be. Wisdom is not made, but is as she has been and forever shall be; for “to have been” and “to be hereafter” do not apply to her, but only “to be,” because she is eternal and “to have been” and “to be hereafter” are not eternal.
And while we were so speaking and straining after her, we just barely touched her with the whole effort of our hearts.

Then with a sigh, leaving the first fruits of the Spirit bound to that ecstasy, we returned to the sounds of our own tongue, where the spoken word had both beginning and end. But what is like to your Word, our Lord, who remains in himself without becoming old, and “makes all things new”

25. What we said went something like this: “If to any man the tumult of the flesh were silenced; and the phantoms of earth and waters and air were silenced; and the poles were silent as well; indeed, if the very soul grew silent to herself, and went beyond herself by not thinking of herself; if fancies and imaginary revelations were silenced; if every tongue and every sign and every transient thing--for actually if any man could hear them, all these would say, ‘We did not create ourselves, but were created by Him who lives forever’--and if, having uttered this, they too should be silent, having stirred our ears to hear him who created them; and if then he alone spoke, not through them but by himself, that we might hear his word, not in fleshly tongue or angelic voice, nor sound of thunder, nor the obscurity of a parable, but might hear him--him for whose sake we love these things--if we could hear him without these, as we two now strained ourselves to do, we then with rapid thought might touch on that Eternal Wisdom which abides over all.

And if this could be sustained, and other visions of a far different kind be taken away, and this one should so ravish and absorb and envelop its beholder in these inward joys that his life might be eternally like that one moment of knowledge which we now sighed after--would not this be the reality of the saying, ‘Enter into the joy of thy Lord’. But when shall such a thing be? Shall it not be ‘when we all shall rise again,’ and shall it not be that ‘all things will be changed’

26. Such a thought I was expressing, and if not in this manner and in these words, still, O Lord, you know that on that day we were talking in this way and that this world, with all its joys, seemed cheap to us even as we spoke.

Then my mother said: “Son, for myself I have no longer any pleasure in anything in this life. Now that my hopes in this world are satisfied, I do not know what more I want here or why I am here. There was indeed one thing for which I wished to delay a little in this life, and that was that I might see you a Catholic Christian before I died. My God has answered this more than abundantly, so that I see you now made his servant and spurning all earthly happiness. What more am I to do here?”

27. I do not well remember what reply I made to her about this. However, it was scarcely five days later--certainly not much more--that she was prostrated by fever. While she was sick, she fainted one day and was for a short time quite unconscious. We hurried to her, and when she soon regained her senses, she looked at me and my brother as we stood by her, and said, questioningly, “Where was I?” Then looking intently at us, dumb in our grief, she said, “Here in this place shall you bury your mother.”

I was silent and held back my tears; but my brother said something, wishing her the happier lot of dying in her own country and not abroad. When she heard this, she fixed him with her eye and an anxious countenance, because he savoured of such earthly concerns, and then gazing at me she said, “See how he speaks.” Soon after, she said to us both: “Lay this body anywhere, and do not let the care of it be a trouble to you at all. Only this I ask: that you will remember me at the Lord’s altar, wherever you are.” And when she had expressed her wish in such words as she could, she fell silent, in heavy pain with her increasing sickness.

28. But as I thought about thy gifts, O invisible God, which you plant in the heart of your faithful ones, from which such marvellous fruits spring up, I rejoiced and gave thanks to you, remembering what I had known of how she had always been much concerned about her burial place, which she had provided and prepared for herself by the body of her husband. For as they had lived very peacefully together, her desire had always been--so little is the human mind capable of grasping things divine--that this last should be added to all that happiness, and commented on by others: that, after her pilgrimage beyond the sea, it would be granted her that the two of them, so united on earth, should lie in the same grave.

When this vanity, through the gift of your goodness, had begun to be no longer in her heart, I do not know; but I joyfully marvelled at what she had thus disclosed to me--though indeed in our conversation in the window, when she said, “What is there here for me to do anymore?” she appeared not to desire to die in her own country.

I heard later on that, during our stay in Ostia, she had been talking in maternal confidence to some of my friends about her contempt of this life and the blessing of death. When they were amazed at the courage which was given her, a woman, and had asked her whether she did not dread having her body buried so far from her own city, she replied: “Nothing is far from God. I do not fear that, at the end of time, he should not know the place whence he is to resurrect me.” And so on the ninth day of her sickness, in the fifty-sixth year of her life and the thirty-third of mine, that religious and devout soul was set loose from the body.”