A Not so Bloody Mary ? 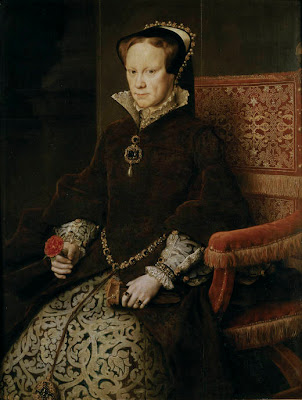 Four recently published books offer a reappraisal of the role and significance of Queen Mary I (Mary Tudor) of England, more popularly known as “Bloody Mary”.

She was the daughter of King Henry VIII and Catharine of Aragon and reigned over England and Ireland from from 19 July 1553 until her death on 17 November 1558. She succeeded her brother Edward VI and was in turn succeeded by her half-sister “Gloriana”, Queen Elizabeth I

In 1554, she married Felipe II of Spain. Prior to that she had been engaged to Carlos V, who kept the above portrait with him when he retired to the Monastery of Yuste.

Her re-establishment of Roman Catholicism in England was reversed by Elizabeth I.

The four books are:

The four books are each reviewed in The Times Literary Supplement (Review by Peter Marshall, Professor of History at the University of Warwick)

The reviews but especially the review in The Telegraph (Review by Noel Malcolm) show that the rehabilitation of Mary still arouses deep and contrary passions.

Most interesting is the attempt by Professor Duffy at the total rehabilitation of Mary as a wise and beneficent ruler who should not be seen as a cruel tyrant.

Here is an extract from the review in the TLS. However as the reviewer points out, the attempt at rehabilitation is not without its difficulties when one looks at the historical record:

“And yet there is a problem, a fiery road-block to the rehabilitation of “Bloody Mary”. What of those 300-odd Protestant dissenters, who died, horribly, at the stake for holding resolutely to opinions of which the Queen disapproved?

Whitelock and Porter deal fleetingly with the burnings; Richards more robustly insists that we not view them through modern eyes, while struggling to establish the extent of Mary’s personal responsibility for the policy.

Eamon Duffy’s Fires of Faith makes clear in its title that the issue cannot be ignored, and that the campaign of religious persecution is central to his assessment of the religious policies of the regime.

This is in some ways the paying of an old debt. Duffy’s The Stripping of the Altars (1992) contained a brilliant rereading of Marian Catholicism, stressing its creativity and far-sightedness, but there Duffy consciously chose not to deal with the burnings, and as a result, his picture of the regime’s policies and priorities was inevitably partial. The invitation to deliver the Birkbeck Lectures at Cambridge in 2007–08 provided an opportunity to redress the imbalance, or rather to seek to remove what Duffy regards as the last remaining obstacle to a comprehensively positive reassessment of the aims and achievements of the Marian restoration.

His thesis, baldly stated, is that the policy of religious persecution, conventionally regarded as disorganized and deeply counter-productive, was in fact not only inevitable, but also competently directed and largely successful. Over the course of its three-and-a-half years, the campaign against heresy intensified, the authorities seizing the initiative and holding their nerve, as Protestants were increasingly burnt in larger batches and in fewer places. The fact that by 1557 a high proportion of the victims were repeat offenders suggests that the regime had isolated a core of recidivists, and the tailing-off of the burnings in 1558 may be a sign that there were fewer zealots around to execute, as much as of the economic and political disruptions of that year.

In spectacularly overturning the accepted narrative, Duffy supplies a masterclass in against-the-grain readings of the historical record, as his principal source is Foxe, whose Acts and Monuments is now available online in all its versions. Against his own intentions, Foxe can be made to show that popular support for the martyrs was often limited, and that the Marian authorities frequently went to remarkable lengths to try to save prisoners from the flames, albeit by demanding a (sometimes minimal) recantation of their beliefs.

Some critics will accuse Duffy of acting as apologist for a campaign of violent repression, but this would scarcely be fair: “confronted by the sanctified savageries of the Tudor age, it would be a hard heart that withheld pity from the victims or felt no indignation against the perpetrators”.

Nonetheless, he argues that we should respect the uncomfortable alterity of the past (where religious leaders on all sides saw death as the appropriate punishment for heresy), and try to put aside modern humanitiarian sensibilities in the cause of sober historical understanding. Yet this does not prevent Duffy from pursuing his brief with verve and gusto, or from taking evident delight in the exposure of platitudes and the debunking of myths. “Pure invention” is his judgement on the famous last words attributed by Foxe to Bishop Latimer, addressing his companion at the stake: “Be of good comfort Master Ridley, and play the man: we shall this day light such a candle by God’s grace in England as (I trust) shall never be put out”.

Occasionally, the rhetorical pudding feels over-egged: there were certainly more (often genuine) reconversions of Protestants to Catholicism at the start of the reign than previous scholars were aware of, or wanted to admit, though whether this really qualifies as a “tidal wave” is questionable.

There is faith as well as fire in Duffy’s account: a key concern is to situate the burnings in the context of a Catholic restoration that was articulate, coherent and authentic. The arguments of judges and interrogators at heresy trials were of a piece with those hammered home in propaganda tracts, journalistic pamphlets, devotional writings and a concerted homiletic campaign: the idea that the Marian authorities were suspicious of preaching is another debunkable myth, as is what Duffy terms A. G. Dickens’s “fatuous” claim that the tragedy of the Marian regime was its failure “to discover the Counter-Refomation”. Marian Catholicism was in fact at the forefront of new devotional currents. Some of this has already been demonstrated in Duffy’s earlier work.

The fresh value of Fires of Faith is two-fold.

First, Duffy brings out more clearly than any previous commentator just how much later Catholicism, in England and internationally, owed to the reconstructed, and intellectually and morally stiffened, Church of Mary Tudor. That all but one of Mary’s bishops refused the Elizabethan Oath of Supremacy is well known, as is the post-1559 exodus of leading figures from the University of Oxford – and to a lesser extent, Cambridge. But Duffy is able to demonstrate that a clear majority of cathedral dignitaries (people one might expect to be Trollopean timeservers) also refused to serve the new regime, and hints – further research is required on this – that there may have been much more resistance among the parish clergy than has often been supposed.

Marian clerics in exile, like Nicholas Sander, went on to play important roles in the final sessions of the Council of Trent, where two of the decrees of the 1555 Westminster Synod – on episcopal residence, and on the establishment of diocesan seminaries – were adopted as normative for the entire Roman Church.

The Marian Church, Duffy concludes, not only discovered, but actually “invented” the Counter-Reformation.

Duffy’s second major achievement is to put a name and a face to the movement’s chief inventor, Cardinal Reginald Pole, papal legate and Archbishop of Canterbury, and yet for long “the invisible man of the Marian restoration”. Pole, Duffy contends, has been seriously misunderstood, and consistently underestimated, then and now. He was not always his own best friend: “a charming and eloquent conversationalist among friends, he could appear forbiddingly austere, taciturn, even secretive in public”, an assessment which makes him sound a bit like Gordon Brown.

Nonetheless, Duffy demonstrates convincingly that Pole’s leadership was crucial across several spheres. From the outset, he pushed a papalist agenda, with which the other leaders of the Church gradually fell into line. John Foxe thought Pole “none of the bloody and cruel sort of papist”, and he has often been seen as an unwilling or ineffectual persecutor.

But Duffy puts him firmly in what has hitherto tended to be an empty historical chair, that of principal director of the Marian burnings. Pole’s closest servants and collaborators were notably avid and efficient in the detection and punishment of heresy, and his hand can be seen in the issuing of central directives on how the problem was to be tackled. He invariably wanted heretics to recant, saving their lives (and their immortal souls). But if they would not do so, he did not shrink from the consequences. Most intriguingly, Duffy demonstrates that Pole was the moving force behind a campaign to undermine the Protestant “pseudo-martyrs” by painting a sophisticated and positive picture of genuine Catholic martyrdom.

This involved promoting the memory of Thomas More. In a piece of inspired literary detective work, Duffy establishes that Nicholas Harpsfield’s Life of Thomas More, generally supposed to be the work of Edwardine exile, must have been composed at the end of 1556, when, as the Cardinal’s right-hand man in the South-east, Harpsfield was up to his elbows in the campaign to reimpose Catholicism. He would hardly have taken the time without Pole’s explicit encouragement or commission, and Duffy also ascribes William Rastell’s 1557 edition of More’s English Works, and William Roper’s manuscript memoir of his father-in-law, to Pole’s direct influence.

History can be reinterpreted, but not rewritten. The Marian regime ultimately failed completely in its aim of remaking England as a Catholic nation, when Mary herself died (of causes none of her biographers can quite agree on) on November 17, 1558. Scholars have suspected for some time that, had she lived longer, failure might not have been inevitable. Now we can be sure it was not. Fires of Faith is a dazzling exercise in historical reappraisal, after which the reign of Mary Tudor will never look quite the same again. We might even start calling it the reign of Mary I. “