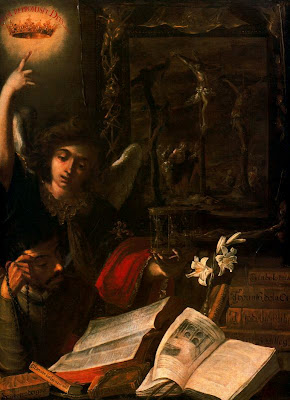 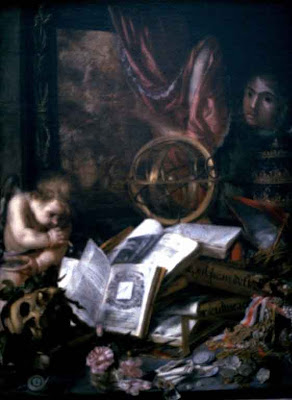 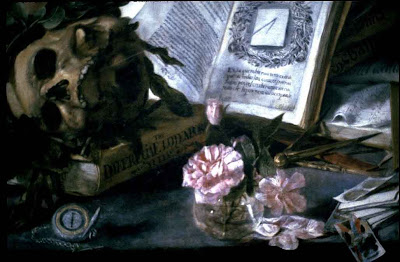 Juan de Valdés Leal (1630 - 1691)
Vanitas/ Allegory of Vanity 1660
Oil on Canvas
Dimensions: 51 7/16 x 39 1/8 in.
Wadsworth Atheneum, Hartford
The two allegories are companion pieces which were painted by de Valdés Leal and were commissioned by Don Miguel de Mañara to hang at the Hospital de la Caridad in Seville

The first painting has many titles:

The Crown of Life was a traditional symbol of grace

The title "Crown of Life" refers to the Biblical passage from the Epistle of St James:

"Blessed is the man that endureth temptation; for when he hath been proved, he shall receive a crown of life, which God hath promised to them that love him." (James 1,12; cf. 2 Timothy 4,8; Revelation 2,10)

A crown can be a sign of festive joy, used at weddings and festivals in olden times . It can be a mark of royalty and those in authority. It can refer to victory, as in a crown of laurels given to the victorious athlete in games. It can also be a mark of honour or of dignity.

In Reformation times a few theologians, most notably Martin Luther, argued that the Epistle of St James was too defective to be part of the canonical New Testament. This is probably due to the book's specific teaching that faith alone is not enough for salvation (James 2:24), which seemed to contradict Luther's doctrine of sola fide (faith alone).

The Council of Trent dogmatically defined the Epistle of St. James to be canonical. The emphasis given to the Epistle was one of the distinguishing marks of the Catholic Counter-Reformation.

When Miguel de Mañara died in 1679, his will expressly forbade spending money on a pompous funeral because he wanted to leave his money to the poor. He left all his wealth, except for small amounts given to long-time servants, to the Hospital de la Santa Caridad.

He directed that a verse be written over the place where he was buried in the floor of the church: "Here lie the remains of the worst man that has ever lived. Pray to God for him."
Posted by Unknown at 5:21 pm