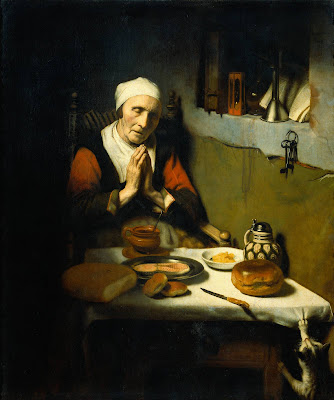 Nicolaes Maes was one of Rembrandt's most gifted pupils

A pious old woman is saying grace. On the table a simple meal has been prepared: bread, porridge, butter and salmon. A cat attempts a furtive attack

The hour-glass is a symbol of passing time. The Bible, the prayer book and the lamp tell us that God's word enlightens the soul.

Although there is salmon on the table, Maes has painted simple fare. Salmon was an everyday food in the seventeenth century.

A closer look reveals that the cat is not entirely accurately depicted.

"Without Thy presence, nought, O Lord, is sweet,
No pleasure to our lips can aught supply.
Whether 'tis wine we drink or food we eat,
Till Grace divine and Faith shall sanctify."
From Prudentius (5th century) Cath. Hymn., III, Ante cib., ii, 10 sq
Posted by Unknown at 7:01 pm