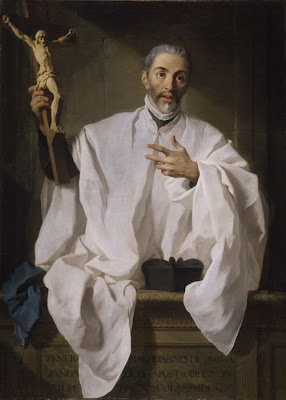 The painting was commissioned by Cardinal Albani, a collector and patron of the arts. He was the nephew of Pope Clement XI

Saint John of Avila was of Jewish converso descent

Among the disciples attracted by the preaching and saintly reputation of Saint John of Avila, Apostle of Andalusia (6 January 1500, Almodóvar del Campo – 10 May 1569, Montilla, Spain) were Saint Teresa of Ávila, Saint John of God, Saint Francis Borgia and the Venerable Louis of Granada

He was venerated in Spain as the patron of diocesan priests. He was a major figure in the reform of the life and ministry of parish priests

He wrote two systematic documents for his friends in the hierarchy who were participating in the Council of Trent. The first of these is the "Memorial" or "Memorandum" (1551) entitled "Reform of the Ecclesiastical State." Much of this material found its way into the Council's documents on reform of the clergy.

In 1561, he wrote a second "Memorial" for the same Council with the title, "Causes and Remedies of Heresies" in which he advocated reform at every level of the Church's life, including the Papacy and Episcopacy.

Pierre Hubert Subleyras settled permanently in Rome after winning the Prix du Rome in 1727. He is most highly regarded for his religious paintings, which are quite serious in spirit

His Mass of St Basil, was painted for the St Peter's, but now is in the Santa Maria degli Angeli.
Posted by Unknown at 8:10 pm