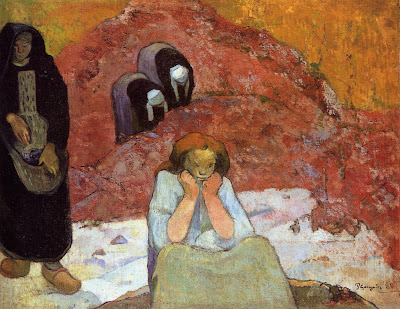 "26. On the cultural plane, compared with Paul VI's day, the difference is even more marked.

At that time cultures were relatively well defined and had greater opportunity to defend themselves against attempts to merge them into one. Today the possibilities of interaction between cultures have increased significantly, giving rise to new openings for intercultural dialogue: a dialogue that, if it is to be effective, has to set out from a deep-seated knowledge of the specific identity of the various dialogue partners.

Let it not be forgotten that the increased commercialization of cultural exchange today leads to a twofold danger.

First, one may observe a cultural eclecticism that is often assumed uncritically: cultures are simply placed alongside one another and viewed as substantially equivalent and interchangeable. This easily yields to a relativism that does not serve true intercultural dialogue; on the social plane, cultural relativism has the effect that cultural groups coexist side by side, but remain separate, with no authentic dialogue and therefore with no true integration.

Secondly, the opposite danger exists, that of cultural levelling and indiscriminate acceptance of types of conduct and life-styles. In this way one loses sight of the profound significance of the culture of different nations, of the traditions of the various peoples, by which the individual defines himself in relation to life's fundamental questions.

What eclecticism and cultural levelling have in common is the separation of culture from human nature.

Thus, cultures can no longer define themselves within a nature that transcends them and man ends up being reduced to a mere cultural statistic. When this happens, humanity runs new risks of enslavement and manipulation. ...

28. One of the most striking aspects of development in the present day is the important question of respect for life, which cannot in any way be detached from questions concerning the development of peoples.

It is an aspect which has acquired increasing prominence in recent times, obliging us to broaden our concept of poverty and underdevelopment to include questions connected with the acceptance of life, especially in cases where it is impeded in a variety of ways.

Not only does the situation of poverty still provoke high rates of infant mortality in many regions, but some parts of the world still experience practices of demographic control, on the part of governments that often promote contraception and even go so far as to impose abortion.

In economically developed countries, legislation contrary to life is very widespread, and it has already shaped moral attitudes and praxis, contributing to the spread of an anti-birth mentality; frequent attempts are made to export this mentality to other States as if it were a form of cultural progress.

Some non-governmental Organizations work actively to spread abortion, at times promoting the practice of sterilization in poor countries, in some cases not even informing the women concerned. Moreover, there is reason to suspect that development aid is sometimes linked to specific health-care policies which de facto involve the imposition of strong birth control measures. Further grounds for concern are laws permitting euthanasia as well as pressure from lobby groups, nationally and internationally, in favour of its juridical recognition.

29. ... [A]s well as religious fanaticism that in some contexts impedes the exercise of the right to religious freedom, so too the deliberate promotion of religious indifference or practical atheism on the part of many countries obstructs the requirements for the development of peoples, depriving them of spiritual and human resources.

God is the guarantor of man's true development, inasmuch as, having created him in his image, he also establishes the transcendent dignity of men and women and feeds their innate yearning to “be more”.

Man is not a lost atom in a random universe: he is God's creature, whom God chose to endow with an immortal soul and whom He has always loved.

If man were merely the fruit of either chance or necessity, or if he had to lower his aspirations to the limited horizon of the world in which he lives, if all reality were merely history and culture, and man did not possess a nature destined to transcend itself in a supernatural life, then one could speak of growth, or evolution, but not development.

When the State promotes, teaches, or actually imposes forms of practical atheism, it deprives its citizens of the moral and spiritual strength that is indispensable for attaining integral human development and it impedes them from moving forward with renewed dynamism as they strive to offer a more generous human response to divine love.

In the context of cultural, commercial or political relations, it also sometimes happens that economically developed or emerging countries export this reductive vision of the person and his destiny to poor countries. This is the damage that “superdevelopment” causes to authentic development when it is accompanied by “moral underdevelopment”....

53. One of the deepest forms of poverty a person can experience is isolation. If we look closely at other kinds of poverty, including material forms, we see that they are born from isolation, from not being loved or from difficulties in being able to love.

Poverty is often produced by a rejection of God's love, by man's basic and tragic tendency to close in on himself, thinking himself to be self-sufficient or merely an insignificant and ephemeral fact, a “stranger” in a random universe.

Man is alienated when he is alone, when he is detached from reality, when he stops thinking and believing in a foundation.

All of humanity is alienated when too much trust is placed in merely human projects, ideologies and false utopias.

Today humanity appears much more interactive than in the past: this shared sense of being close to one another must be transformed into true communion.

The development of peoples depends, above all, on a recognition that the human race is a single family working together in true communion, not simply a group of subjects who happen to live side by side."


Gauguin`s childhood was marked by frequent moves and shifting relationships.

Driven to paint full-time, he returned to Paris in 1885, leaving his family in Denmark. Without adequate subsistence, his wife (Mette Sophie Gadd) and their five children returned to her family

Gauguin turned his back on a well-to-do life to become a painter. This decision plagued him for several years and drove his wife into a state of emotional and psychological distress which left her racked with disappointment and rancour.

She suffered all the more keenly because they had married for love, which was unusual in middle class circles at the time. But some inner force carried Gauguin towards his destiny.

In 1887, after visiting Panama, he spent several months near Saint Pierre in Martinique, in the company of his friend the artist Charles Laval

In this picture he painted women in costumes from Brittany - where he had just been staying - but in a vineyard in Arles, while the main figure in the foreground resembles a Peruvian mummy he had seen in Paris.

Gauguin's theme in his picture is fundamental human misery. The melancholy figure and tone of the picture are typical of his work as a whole

In 1891, Gauguin went to Tahiti, an island he imagined to be a primitive paradise. The artist wanted "to live there in ecstasy, calm and art". His financial difficulties, his aesthetic concerns and this very Baudelairian "invitation au voyage" drove him to that distant land to escape "the European struggle for money" - to be "free at last

On May 9th, 1903, Gauguin, dissipated by drug-addiction, died of a heart attack on Hiva Oa Island in the Marquesas in French Polynesia

Gauguin's art has all the appearance of a flight from civilisation, of a search for new ways of life, more primitive, more real and more sincere

Gauguin had a curious relationship with religion. Not holding one firm set of beliefs, his religion can best be described as naturalistic and his paintings reflect Christian, Buddhist, and Maori influences, among other religions

He was raised as a Catholic and attended Catholic schools while growing up. As an adult, Paul Gauguin was interested in and participated in a number of eclectic religious trends popular among intellectuals and artists of his time, including Spiritualism, the occult, Theosophy and Rosicrucianism.

Eventually Gauguin became a convert to Theosophy and a member of the Theosophical Society. Gauguin "surrendered completely" to this new religion organized by Madame Blavatsky. Theosophy united elements of many different major world religions (particularly Christianity, Buddhism and Hinduism) along with many esoteric religious traditions of the era, including Spiritualism. Gauguin remained a devout Theosophist for about twenty years until the end of his life.