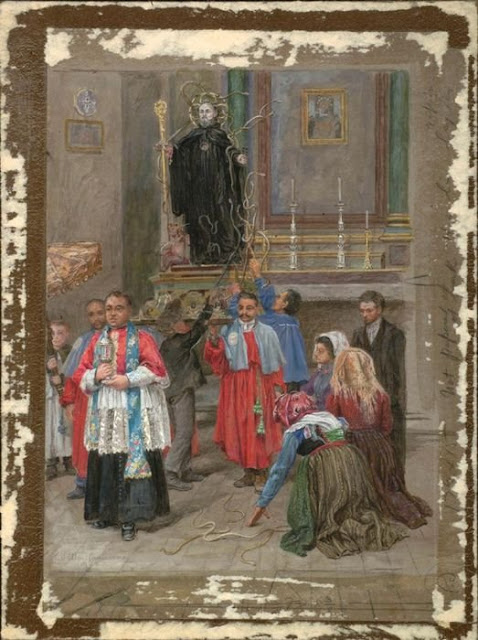 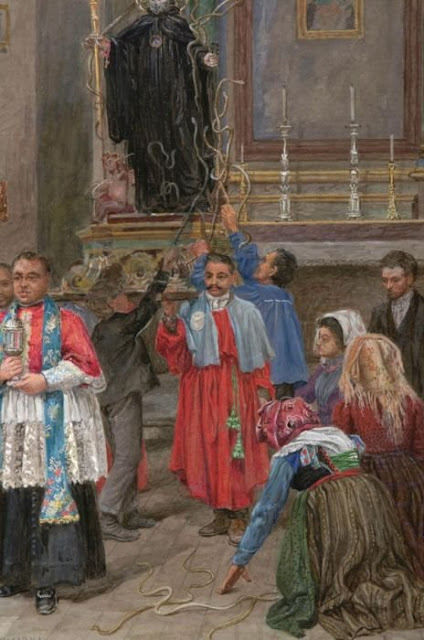 'The festival in S. Domenico is connected with some of the oldest traditions in the Abruzzi. The serpari, who are said to be descendants of Circe, and who handle serpents with impunity, make this procession weird and most barbaric... I painted the end of the procession when the saint had been returned to the church and the last serpents were being taken off him.' (Estella Canziani)
Illustrated in "Through the Apennines and the Lands of the Abruzzi" p.292

Introduction
The Serpari (snake-charmers) Festival in Cocullo is one of the most ancient festival in Abruzzo. For centuries the faithful went on pilgrimage to the Sanctuary of San Domenico from everywhere in Abruzzo and nearby regions to be healed from any sort of disease, especially from the bites of vipers, rabid dogs and toothache.

The earliest historical evidence of San Domenico's feast in Cocullo dates back to 1392.

On the first Thursday of May the pilgrims arrive by car or bus outside the village, and reach the church singing religious hymns in the Saint's honour to the music of bagpipes.

- ringing a small bell pulling the rope with the mouth, as a protection against toothache throughout the coming year

- picking the blessed soil inside the church, to spread it later over the fields as a protection against crop pests.

At midday, after Mass, from the church at one end of the village St Dominic's statue, covered in gold, silver and precious jewels left by those who saw their prayers fulfilled, is carried in procession through the alleys of the ancient town.

In front there come the priests, then girls in costume carrying the "ciambelli", typical cakes specially prepared for the day. Live snakes are also around the neck and arms of the snake charmers and the faithful, who slowly process after the statue, singing in the middle of the crowd.

From the behavior of the snakes the inhabitants of Cocullo derive omens: if the snakes surround the head of the statue, that is good omen and the crowd cheers. After the procession the many tourists gather around the serpari to have their picture taken with them.


A pagan and Christian tradition

San Domenico stayed in Cocullo only a short time, leaving to the village church one molar tooth and the iron shoe of his female mule, which are still jealously kept as precious relics: the horse shoe has healing power on the bites of animals, while the teeth heals the bite of poisonous snakes.

Scholars have shown how the figure of the Saint was superimposed to ancient rites and customs of pagan origin.

In Abruzzo snakes are common, and in old times their bites were frequent cause of death. The Marsi, shepherds and fishermen who lived on the mountains and the coast of Lake Fucino, worshipped goddess Angitia, protector of snakes.

Near Luco dei Marsi there was a forest called "lucus Angitiae", sacred to the goddess, and to her in early spring snakes used to be sacrificed. A legend says that Ovid, a celebrated Latin poet born in Sulmona, was desperately in love with a cold-hearted girl, so she took refuge into the goddess's forest to learn the magic art. In the ancient world the Marsi were renowned for their power on poisonous snakes and in the 1st and 2nd century are recorded as healers and street fortune tellers in Rome. In the course of the Middle Ages the Marsian religion disappeared, but the belief of magical powers on poisonous snakes and on rabid dogs were transferred in the popular culture to healing figures, who were called "ciarauli", who knew the secrets to capture snakes and heal from their bite."
(From the Abruzzo Heritage Website)
Posted by Unknown at 8:10 pm