The Entry of Christ into Jerusalem 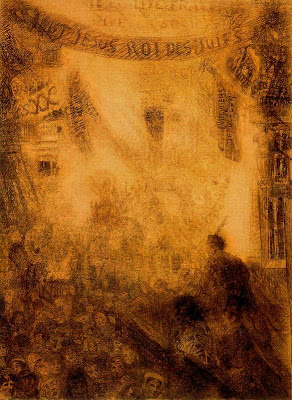 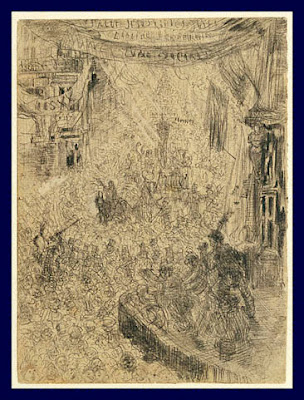 James Ensor (1860 - 1949 )
Christ's Entry into Jerusalem
Graphite and Conté crayon
8 7/8 x 6 1/2 in.
The GettyMuseum, Malibu
James Ensor made this drawing as a preparatory study for the centerpiece drawing--about ten times larger than this sheet--of a series of five drawings and one painting that he exhibited in 1887 in Brussels with Les XX.

James Sidney Edouard, Baron Ensor (April 13, 1860 - November 19, 1949) was a Belgian painter and printmaker, an important influence on expressionism and surrealism who lived in Ostend for almost his entire life.

He had an English father and a Flemish mother.

He remained a British subject until 1929, when he took Belgian nationality and was created a baron.

He began his artistic career as a portrait painter but soon became involved with the avant-garde group Les XX (the Twenty), whose goal was to promote new artistic developments throughout Europe.

Although Ensor was considered the group's leader and founder, he had sharp differences of opinion with other group members.

In the mid-1880s, Ensor suffered from an ulcer and from a personal crisis: his family forbade him to marry the woman he loved.

He returned to painting religious subjects and plunged to the depths of despair when he decided to sell the contents of his studio in the 1890s.

Current political events, literary themes, the life of Christ, and the popular spectacle of the annual carnivals in Belgium were among Ensor's favorite subjects.

By 1885-6 he developed a highly personal fantastic style with grotesque mask-like figures, skeletons, etc., as a satire on the stupidities of human existence.

Deeply concerned with political and social injustice, he ridiculed the Church, the military, and the bourgeoisie.

Although Ensor was an atheist, he identified with Christ as a victim of mockery. Many of his pictures are scenes from the life of Christ.
Posted by Unknown at 9:36 am