Fragment of a Lost Gospel 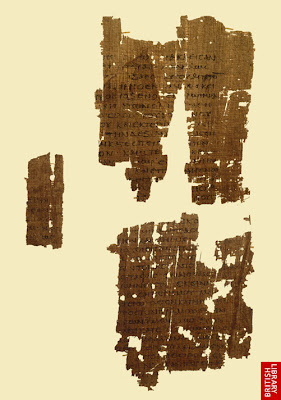 In the British Museum website, it is stated that the above papyrus dates from the first half of the second century AD, the period when the four official Gospels were written, according to some scholars.

The Egerton Papyrus 2 fragments were among a collection bought by the British Museum in 1934 from a dealer in Egypt.

Where they were found is not known for certain, but other items in the collection came from Oxyrhynchus.

They are written in Greek on thin sheets made from slices of the reed-like papyrus plant soaked in water, pressed together and then dried.

The papyrus fragment tells a story not mentioned elsewhere.

It speaks of Jesus standing by the River Jordan and sowing the river with seeds, which produce fruit, to the joy of the onlookers.
Posted by Unknown at 6:16 pm