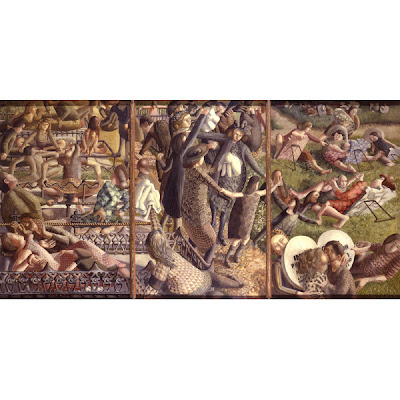 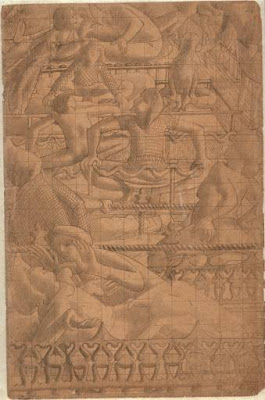 'Reunion' was a small section in a grand scheme. He planned a vast shaped canvas fifty feet wide which would portray the Last Judgement and Resurrection

However, the scale of the work meant that selling it as a whole was impossible, so each section was sold off separately.

This is one of the panels.

Spencer visited Port Glasgow in 1940 to fulfil a commission to paint its shipyards. He was an official war artist.

He was attracted by the cemetery there. The cemetery is on the outskirts of the town. It lies on a hill and overlooks the estuary of the River Clyde. The Resurrection takes place in this cemetery.

In a notebook Spencer recorded that due to a jazz band playing dowstairs in the house where he was living, he went for a walk 'up along the road past the gasworks to where I saw a cemetery on a gently rising slope . I seemed then to see that all in the plain were resurrecting and moving towards it . I knew then that the resurrection would be directed from this hill'.

Resurrection was a theme Spencer had tackled before at various times in his artistic career. Cookham 1924-27 and Burghclere Chapel (Sandham Memorial Chapel) 1927 - 1928 were on the same theme.

However the Port Glasgow Resurrection series is different from the earlier works.

In this work, the citizens of Port Glasgow (about 20 miles from Glasgow) are depicted climbing out of their graves and greeting one another, as well as raising their hands in ecstatic gratitude.

In Resurrection: The Reunion, Spencer depicts men, women and children climbing out of their graves, stretching, as if waking from a long sleep.

Later, in Resurrection: Tidying, the same figures can be seen brushing one another's hair and cleaning themselves before returning to their normal lives.

The series ends with Port Glasgow Cemetery, depicting a still, quiet graveyard with no people at all.

The theme is of one of renewal after destruction and death.

In Port Glasgow, Spencer found a community that accepted him in a way that he compared to his experience in his home community in Cookham - although his personal circumstances had led him to become partially estranged from there by the time of the Port Glasgow commission.