Christ's Entry into Brussels in 1889 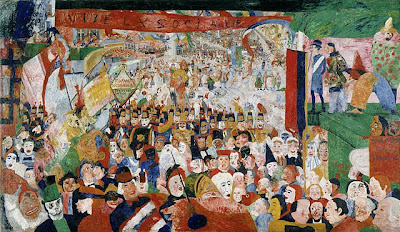 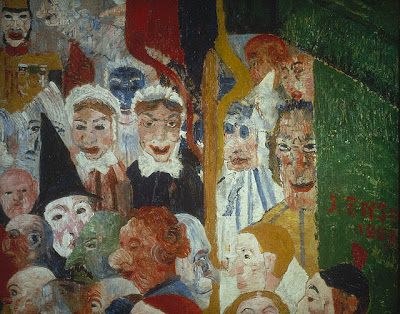 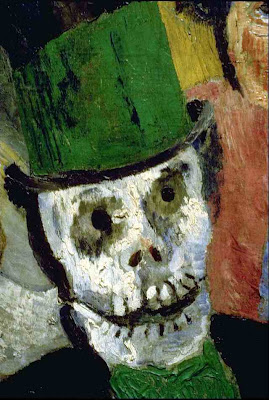 Ensor`s large picture 'The Entry of Christ into Brussels' was refused by Les XX in 1889 and his work aroused violent opposition. It is now regarded as his masterpiece.

Ensor kept The Entry of Christ into Brussels with him throughout his life, and as with many of his paintings, he made a number of alterations to it.

This painting was not exhibited publicly until 1929. But Ensor displayed it prominently in his home and studio throughout his life.

Ensor deals with the question: if Christ returned to Earth today, what would be the reaction ? Would there be any difference to what happene two thousand years ago ?

Ensor reasoned that if Christ were to return to earth, modern commercial and political interests would certainly try to co-opt the event. Consider what happens when there is a Papal visit to a country outside Italy. Or when someone like Mother Teresa of Calcutta made a visit ?

Although Christ has been given a parade in his honour, and he is shown entering Brussels on the back of a donkey as he entered Jerusalem on Palm Sunday, he is almost lost in the crowd.

The mayor of Brussels (at upper right, with the cane and sash) seems to be trying to use the event for his advantage. The atheist social reformer Emile Littré, shown in bishop's garb holding a drum major's baton is leading on the eager, mindless crowd.

The texts shown in the print include many contemporary social issues mixed in with advertisements:

Ensor's society is a mob, threatening to trample the viewer--a crude, ugly, chaotic, dehumanised sea of masks, frauds, clowns, and caricatures. Public, historical, and allegorical figures along with the artist's family and friends made up the crowd.

Christ has been made small, marginalised and almost lost and forgotten in the torrent of people around him.

The work is more a social commentary and satire than a religious painting.

The central figure of Christ appears to be a self-portrait of Ensor. The bright yellow colour heightened the area around Christ with an intensity. This is consistent with Ensor's obsessive fascination with the religious and spiritual powers of light: the concept of Christ's halo as both a physical and spiritual source of light and power.
Posted by Unknown at 9:54 am