The British Library, London has a large collection of old illuminated manuscripts. Many are works with a Christian purpose or connection 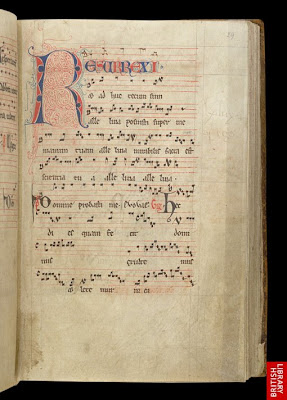 It fared better in the 13th century, when this manuscript was made. This initial 'R' marks the start of the music for Christ's Resurrection on Easter day: 'Resurrexi . . .' " 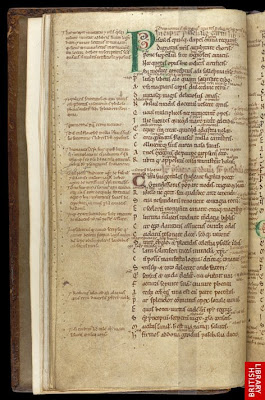 
"Sedulius was a 5th-century Christian poet.

This manuscript is part of what was once a much larger volume (a former owner separate the parts by different authors) which contains an ownership inscription of the Cistercian Abbey of Thame, between Aylesbury and Wallingford, in Oxfordshire.

This page has the start of the Easter Poem, introduced by a simply ornamented green initial P.

There is an extensive series of glosses between the lines and in the outer margin. " 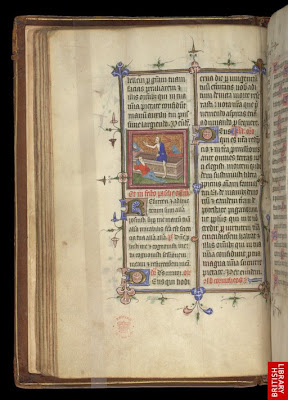 
"A book of offices (special prayers for each day) and other prayers, this manuscript was illuminated by Hermann Scheere and one or more unknown painters.

Scheere may have been German, but his style suggests that his artistic background was Flemish. Certain features of its decoration reveal his continental origins and suggest that he decorated this book soon after arriving in England. It presents several unique or early examples of subject matter and text.

Provided with a calendar, it includes prayers for feast days and ones special to certain saints, similar to a book of hours. It would have been used as a personal prayerbook.

The prayers for Easter are illustrated with a picture in a square frame within the column of text., a continental feature differing from the typical English presentation of such pictures within the first letter. It depicts Christ, his wounds clearly visible, stepping out of a sarcophagus in open air, the soldiers sleeping around it.

The picture emphasises his human body, to make the point that he is resurrecting and also to refer to the Eucharist. The connection between the two would have been a point for contemplation.

The text is the introit or introductory processional hymn of Easter Sunday." 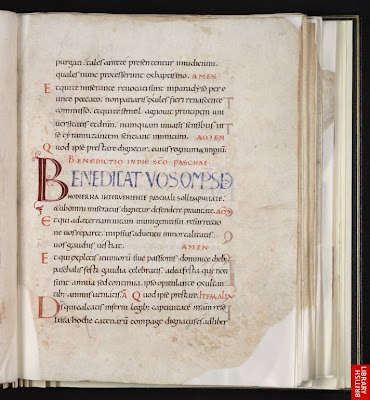 
"A pontifical is a book of the church services conducted by a bishop, such as the ordination of a priest and the dedication of a church.

This pontifical from Anglo-Saxon England was discovered in 1970 in the stables at Brodie Castle, in Forres, Scotland. It is called the 'Anderson Pontifical' after Hugh Anderson, minister of the parish of Drainie, Morayshire, in the early 18th century, whose name is inscribed with date in the book.

No one knows how the ancient service book got from its place of origin, probably Canterbury or Winchester, to Scotland, but it is possible that it may have arrived in the Middle Ages, before the 13th century when Drainie was the seat of the bishops of Moray.

During services at a cathedral on important feast days, such as Christmas and Easter, the bishop would say a special benedictional prayer.

This is the blessing for Easter Sunday, identified by the title in red capital letters in the middle of the page. The blessings tend to be formulaic, beginning with conventional openings ('Benedicat vos...', 'Bless us...') and proceeding through a series of prayers focusing on the significance of the feast, each responded to with 'Amen' or other set responses, which are noted in red letters in this manuscript. "
Posted by Unknown at 7:02 pm