Infant of the Apocalypse 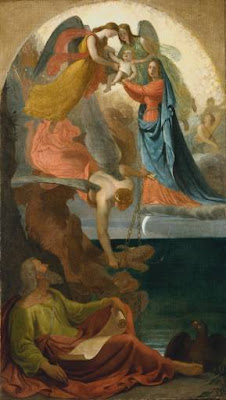 This work has an interesting provenance.

See the text for the painting in the Tate Gallery website.

Severn (December 7, 1793 – August 3, 1879) was an English portrait and subject painter. History now recalls him more as a personal friend of the English poet John Keats.

On 17 September 1820, Severn sailed to Italy with John Keats. Severn agreed to accompany him to Rome when all others could, or would, not. They arrived in Rome on 15 November 1820. The trip was supposed to cure Keats's lingering illness, which he suspected was tuberculosis. In Rome they both lived in an apartment at number 26 Piazza di Spagna, just on the right side of the Spanish Steps.

In Rome during the winter of 1820-21, Severn wrote numerous letters about Keats to their mutual friends in England.

Severn's letters are the considered the definitive account of the poet's final months.

Severn nursed Keats in Italy until his death in February 1821.

Severn continued to live in Rome until 1841. Years later he returned to Rome. He died in August of 1879 at the age of 85 and was buried in the Protestant Cemetery right next to John Keats.

While both men were in Rome, Cardinal Weld helped Severn with a lawsuit. Weld saw the study for the above picture. He commissioned a full-scale version, apparently already with the intention of placing it in the Church of San Paolo fuori le Mure, although possibly it may have been destined for the Parthenon.

The Cardinal died in 1837. Severn encountered every form of opposition to the placing of the picture in the Church. He succeeded in 1840 in hanging the altarpiece in a bricked-up archway.

It was the first time that a painting by a Protestant artist had been hung in a Catholic church in Rome.

In gratitude for the help with the law suit and the commission, Severn painted the above study and intended to gift it to Cardinal Weld. However Weld died before the gift could be effected.

In the spring of 1832. a young W.E. Gladstone (later the distinguished Prime Minister) visited Severn’s studio in Rome and expressed deep admiration for his artwork. He recorded his impressions in his diary: “enjoyed the visit much both from the man & from his works ... All his works are full of poetry: & of a higher class in this respect than any I have seen in Rome, either in painting, or Sculpture, except only Thorwaldsen’s – if even those” (Diaries 1: 474).

Before leaving Rome on 5 June 1832, Gladstone returned to Severn’s studio observing that “his pictures lose nothing on a second visit” (Diaries 1: 513).

Gladstone visited Rome again in the winter of 1838-39 and reiterated his praise for Severn’s artwork. He was awestruck by the figure of John the Divine: “Has much been painted within the last 200 years which is of a higher order than Severn’s Saint John?” (Diaries 2: 548).

Gladstone also noted in his diary that ‘the Chaining of the Dragon is a great object of interest: a bold effort, a new subject, finely conceived and executed ...The picture has caused much jealousy, as it is to go to a Chapel in San Paolo, a present from Cardinal Weld to the Pope’.

He acquired the painting.

Gladstone continued to be an admirer of Severn’s work well into the 1840s, purchasing a number of his paintings, advancing him money, introducing him to other patrons, and finally in 1860 recommending him for the post of British Consul at Rome

The painting is based on Chapters 12 and 20 ‘The Revelation of St. John the Divine’.

St John is writing down his account of his vision on the Island of Patmos, the ‘woman clothed with the sun’ gives birth to ‘a man child, who was to rule all nations with a rod of iron’ while the ‘great red dragon, having seven heads and ten horns, and seven crowns upon his heads’ waits ‘to devour her child as soon as it was born’.

The painting also touches on the war in heaven in which Michael and his angels fight against the dragon; Michael's host is suggested in the sky at the left.

The chaining of the dragon is described in Chapter 20.

The eagle at St John's feet is his traditional symbol.
Posted by Unknown at 6:47 pm