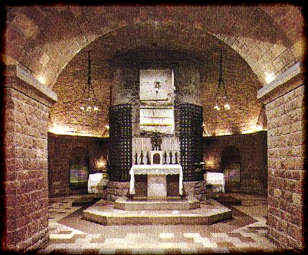 The Times reports that Franciscan friars at Assisi have confirmed that Mikhail Gorbachev, the last Soviet President, is a Christian after he was seen praying at the tomb of St Francis.

"Mr Gorbachev has long acknowledged that he was influenced by his grandmother, an Orthodox believer and is a a regular participant in peace conferences in the Umbrian town where St Francis is buried.

Vladimir Putin, a former KGB officer, has also turned to Orthodox Christianity and wears a cross round his neck.

Father Miroslavo Anuskevic, a Lithuanian priest at the Basilica of St Francis, said he had spotted Mr Gorbachev - for years a professed Communist atheist - praying anonymously "in silent meditation" for half an hour at the tomb of St Francis "with very Oriental intensity" with his eyes closed, alongside his daughter Irina.

President Reagan is said to have often wondered whether the Soviet Union's last leader was a "closet Christian," observing to aides at one point during a US-Soviet summit "I think he believes".

Mr Gorbachev's parents reportedly kept Orthodox icons hidden behind pictures of Stalin and Lenin, as did the parents of his late wife, Raisa, who were reportedly executed for the offence."