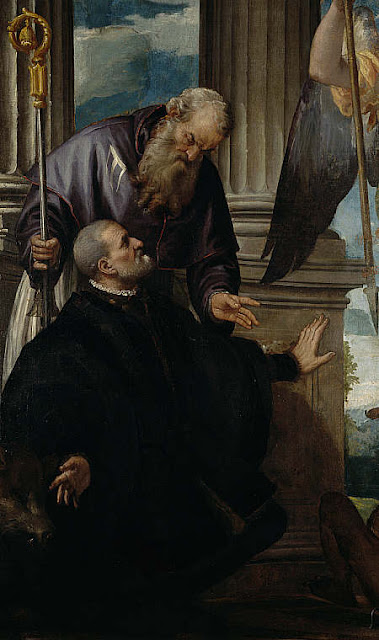 
Of this work which appears to be a fragment of what was originally a much larger work, the Gallery says in its website:

“This fragment once formed the lower left part of an arched altarpiece painted by Veronese around 1563 for the Petrobelli family chapel in the church of San Francesco in Lendinara, near Rovigo. …

Parts of a wing, an arm with a spear, and a devil visible at the right of this canvas originally belonged to a central figure of the Archangel Michael, to whom the chapel was dedicated.

The head of this figure has recently been identified in the Blanton Museum of Art, Austin, Texas.”

Lendinara is a town and comune in the province of Rovigo, Veneto, northern Italy

The National Gallery of Canada has a large section on its website about The Petrobelli Altarpiece.

It is quite fascinating.

The work was commissioned by two cousins Antonio and Girolamo Petrobelli. Antonio is the figure kneeling in the work in the Scottish National Gallery

The family came to Lendinara in the 1500s and became wealthy.  The work was meant to hang in the family`s funeral chapel, again specially commissioned.

The family`s wills are instructive of the cousin`s intentions in commissioning the works :

“The little information available regarding the two Petrobelli patrons comes from their wills. The first concern of these wills, with their specific rules, was to ensure that the family name is perpetuated and its possessions be passed down to future generations via the first-born males. Should Antonio and Girolamo have no legitimate heirs; the family estate would be bequeathed by drawing lots among the male descendents of Giovanni Petrobelli. Of these descendants, those possessing a doctorate in law or medicine, or holding a certain rank in the Venetian army could put their name in twice. In the event the family had no heir, the possessions would be converted into a charitable trust in honour of Saint Anthony.”

What happened to the family?

“Antonio Petrobelli died on December 26, 1569, four days after completing his will. Without heir, he named Girolamo as the inheritor of his possessions. Girolamo passed away 18 years later, on March 12, 1587. Petrobello, his illegitimate but recognized son, inherited the family legacy. Upon Petrobello’s death in 1635, the estate was bequeathed to distant relatives according to the rules established by Antonio and Girolamo in their respective wills. With no descendants left in Lendinara, the history of the commission was forgotten.”

What happened to the work and the Church ?

“In 1769, the Conventual Friar Minor order was suppressed by the Venetian government. Less than a decade later the church and property were sold to a private owner, eventually falling into disrepair. In 1785 the church was finally demolished and many of its possessions were put up for auction. By 1789, the Petrobelli Altarpiece was in the hands of a Venetian art dealer, who cut it into fragments and sold the pieces.”

It is of course impossible to peer into men`s actions, hearts and souls as one can peer through a window. That, only God can do

But one cannot help but recall that St Anthony Abbot (ca. 251–356), the founder of Christian monasticism,  was moved by listening to Christ's words:

Anthony listened to these words. He felt as if they were addressed to him personally by Christ. He felt impelled to obey them to the letter. And did.