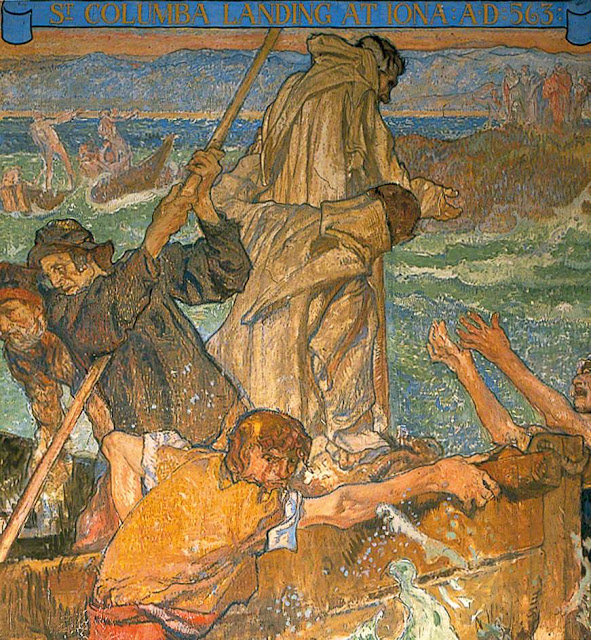 Largely self taught, Brangwyn was a most distinguished and successful artist in his time. He was a man of many talents

In his later years he mainly devoted himself to religious art

He created a number of Stations of the Cross

The art historian Libby Horner and leading  expert on Brangwyn writes of the above painting of St Columba:

"Brangwyn probably gained the commission through his friend, the architect, Sir Aston Webb, who, with his partner E Ingress Bell, was the architect for the school.

The murals, on the subject of the Mission and Expansion of Christianity, beginning with the Acts of the Apostles and leading to the Conversion of our own Islands, and Foreign Missionary Work are placed in the school chapel"

"As far as can be ascertained no proper symbolical representation of St. Columba exists. The few attempts that have been made are for the most part mistaken. A suitable pictorial representation would exhibit him, clothed in the habit and cowl usually worn by the Basilian or Benedictine monks, with Celtic tonsure and crosier. His identity could be best determined by showing him standing near the shell-strewn shore, with currach hard by, and the Celtic cross and ruins of Iona in the background."

The main source of information about Columba's life is the Vita Columbae by Adomnán (also known as Eunan), the ninth Abbot of Iona, who died in 704.