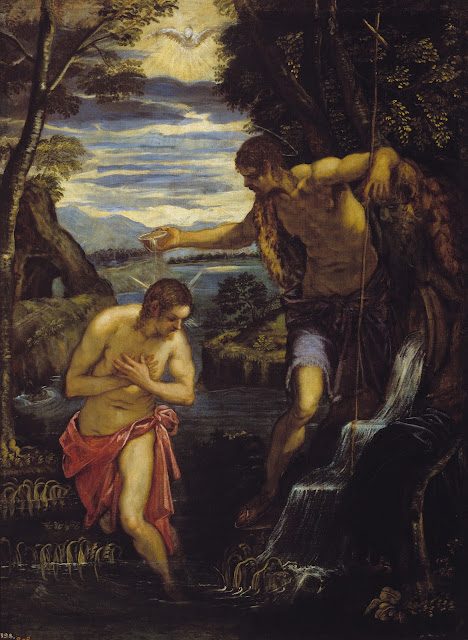 
Domenico was the son of the more  renowned painter Jacopo Tintoretto. He was the main collaborator of his father

Not as dynamic or as vital as his father, he nevertheless excelled at portraiture and came out of his father`s shadow at the early age of 17 years when he was admitted to the Confraternity of St Luke

This work was originally and erroneously attributed to Jacopo

It is  unsurprising that his work be mistaken for that of Jacopo. He trained in his father's workshop and emulated his style in his early career

The work  was part of the estate in 1630 of Leonardo Ottoboni, chancellor of the Republic of Venice. It is likely that it was commissioned as a work of private devotion and contemplation possibly in a private chapel

Until his public ministry, St John the Baptist had led in the desert the life of an anchorite.

The Catholic Encyclopedia article on the Baptist describes him at this time by reference to Scripture:

"In the fifteenth year of the reign of Tiberius Caesar..the word of the Lord was made unto John, the son of Zachary, in the desert. And he came into all the country about the Jordan, preaching" (Luke 3:1-3), clothed not in the soft garments of a courtier (Matthew 11:8; Luke 7:24), but in those "of camel's hair, and a leather girdle about his loins"; and "his meat" — he looked as if he came neither eating nor drinking (Matthew 11:18; Luke 7:33) — "was locusts and wild honey" (Matthew 3:4; Mark 1:6); his whole countenance, far from suggesting the idea of a reed shaken by the wind (Matthew 11:7; Luke 7:24), manifested undaunted constancy".

That is the man we see  in the painting

John baptised in the waters of the Jordan. Baptism was the hallmark of his mission. He was called "the baptiser"

As the Encyclopedia makes clear

"This feature of his ministry, more than anything else, attracted public attention to such an extent that he was surnamed "the Baptist" (i.e. Baptizer) even during his lifetime (by Christ, Matthew 11:11; by his own disciples, Luke 7:20; by Herod, Matthew 14:2; by Herodias, Matthew 14:3)"

The Gospels of Mark, Matthew and (most clearly) Luke relate that Jesus came from Galilee to John in Judea and was baptized by him, John did not come to Jesus

.Who was John and what did he preach ?

There is mystery about this encounter between Christ and John. This mystery is reflected in the painting The painting invites contemplation and it is likely that the work may have been commissioned for private devotion

Pope Benedict XVI has preached on St John the Baptist and the Baptism of Christ on a umber of occasions and reflected on the man, his mission and his significance. Here are some of his talks and homilies:

Homily Feast of the Baptism of the Lord   Sunday, 7 January 2007