Seek truth while you are young

The connection between the Church and the foundation of the medieval Universities is well known
Let us take one example: the College of the Sorbonne in Paris in 1257
It was founded by Robert de Sorbon (October 9, 1201 – August 15, 1274), theologian, the chaplain of Louis IX of France
The novel feature of this college is that it was planned for graduates who already had the degree of Master of Arts and were about to undertake the Doctorate in Theology. It was originally intended to teach theology to twenty poor students
It was of course to become the most famous College of the University of Paris
But it was only one of the nineteen colleges founded at Paris before 1300
At least another thirty seven colleges were founded at Paris in the fourteenth century. The fourteenth century was the high point of collegiate expansion in Paris and in Western Europe. It is thought that in the fourteenth century at least eighty seven colleges were founded in Western Europe
Here is the original foundation document of the Sorbonne. The central idea was vivere socialiter et collegialiter, et moraliter, et scholariter 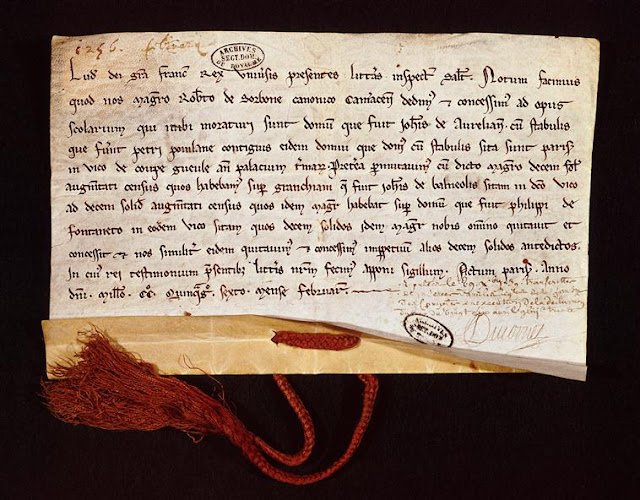 Charter of foundation for the College of the Sorbonne
February 1257
Musée de l'Histoire de France, Paris
Looking at it who would have thought from such small beginnings such a great instutution would have developed. It is useful to compare it with the more modern charter documents of universities set up in Britain within the last twenty years.
Here is the Charter or Bull granted by Pope Clement IV approving the foundation of the College of the Sorbonne and the rules for the election of Administrator 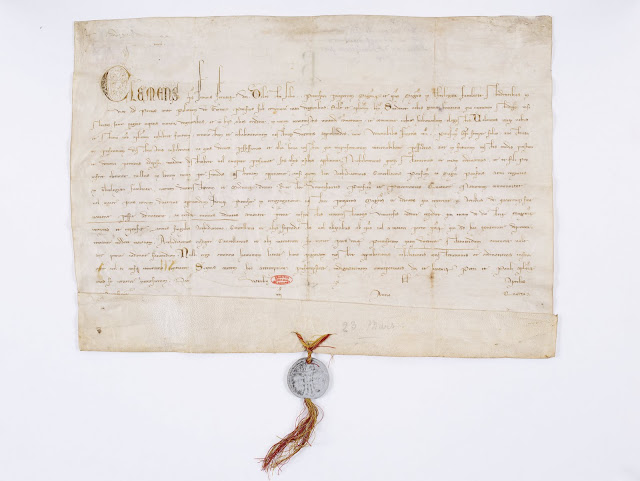 Clement IV was one of the French Popes (before Avignon) and friend and protector of among others Roger Bacon and St Thomas Aquinas
With the background of the long involvement of the Church in the foundation and development of Universities, and also his own involvement in University life and studies, the recent words of Pope Benedict XVI to the young professors of Spanish Universities should be looked at carefully. They were part of the World Youth Day celebrations presently going on in Madrid (Basilica of the Monastery of San Lorenzo de El Escorial Friday, 19 August 2011)
The theme of his talk was their vocation: "Service in the spread of Truth"
He referred to the place of his talk, the Basilica of the Monastery:

"an eloquent witness to the life of prayer and study. In this highly symbolic place, reason and faith have harmoniously blended in the austere stone to shape one of Spain’s most renowned monuments."

He again referred to the vocation of the university professor in what a University should be, using the example of his own experience as a young professor at the University of Bonn:

"our passion for an exciting activity, our interaction with colleagues of different disciplines and our desire to respond to the deepest and most basic concerns of our students. This experience of a “Universitas” of professors and students who together seek the truth in all fields of knowledge, or as Alfonso X the Wise put it, this “counsel of masters and students with the will and understanding needed to master the various disciplines” (Siete Partidas, partida II, tit. XXXI), helps us to see more clearly the importance, and even the definition, of the University."

Nowadays there has of course been an explosion of Universities in Britain and Western Europe. In Britain, this has been achieved by the conversion of what were Colleges of Further Education and Technical Colleges into "Universities".
This has been encouraged and funded by the State.
Even the older universities require this State funding to fund their expansion and present maintenance. Primarily this State expansion is for the training of a more educated workforce, that is to say for economic reasons
The Pope referred to this and the reasons for this State intervention. He also warned of the dangers:

"At times one has the idea that the mission of a university professor nowadays is exclusively that of forming competent and efficient professionals capable of satisfying the demand for labour at any given time. One also hears it said that the only thing that matters at the present moment is pure technical ability. This sort of utilitarian approach to education is in fact becoming more widespread, even at the university level, promoted especially by sectors outside the University.
All the same, you who, like myself, have had an experience of the University, and now are members of the teaching staff, surely are looking for something more lofty and capable of embracing the full measure of what it is to be human.
We know that when mere utility and pure pragmatism become the principal criteria, much is lost and the results can be tragic: from the abuses associated with a science which acknowledges no limits beyond itself, to the political totalitarianism which easily arises when one eliminates any higher reference than the mere calculus of power.
The authentic idea of the University, on the other hand, is precisely what saves us from this reductionist and curtailed vision of humanity."

What then is a "University" ? What is the Catholic idea of an "authentic University" ? Blessed John Newman wrote screeds on this subject. The Pope only had the opportunity to sketch out the barest details. What it is and what it is not:

"In truth, the University has always been, and is always called to be, the “house” where one seeks the truth proper to the human person.
Consequently it was not by accident that the Church promoted the universities, for Christian faith speaks to us of Christ as the Word through whom all things were made (cf. Jn 1:3) and of men and women as made in the image and likeness of God.
The Gospel message perceives a rationality inherent in creation and considers man as a creature participating in, and capable of attaining to, an understanding of this rationality.
The University thus embodies an ideal which must not be attenuated or compromised, whether by ideologies closed to reasoned dialogue or by truckling to a purely utilitarian and economic conception which would view man solely as a consumer."

In trying to achieve this proper ideal, the pursuit of proper truth, the vocation of university teacher is a noble one. But what is it that an "authentic" university teacher should strive for ? Pope Benedict XVI devotes quite some time to that subject:

"You yourselves have the honour and responsibility of transmitting the ideal of the University: an ideal which you have received from your predecessors, many of whom were humble followers of the Gospel and, as such, became spiritual giants.
We should feel ourselves their successors, in a time quite different from their own, yet one in which the essential human questions continue to challenge and stimulate us.
With them, we realize that we are a link in that chain of men and women committed to teaching the faith and making it credible to human reason.
And we do this not simply by our teaching, but by the way we live our faith and embody it, just as the Word took flesh and dwelt among us.
Young people need authentic teachers: persons open to the fullness of truth in the various branches of knowledge, persons who listen to and experience in own hearts that interdisciplinary dialogue; persons who, above all, are convinced of our human capacity to advance along the path of truth.
Youth is a privileged time for seeking and encountering truth. As Plato said:

“Seek truth while you are young, for if you do not, it will later escape your grasp” (Parmenides, 135d).

This lofty aspiration is the most precious gift which you can give to your students, personally and by example. It is more important than mere technical know-how, or cold and purely functional data.
I urge you, then, never to lose that sense of enthusiasm and concern for truth. Always remember that teaching is not just about communicating content, but about forming young people. You need to understand and love them, to awaken their innate thirst for truth and their yearning for transcendence. Be for them a source of encouragement and strength.
For this to happen, we need to realize in the first place that the path to the fullness of truth calls for complete commitment: it is a path of understanding and love, of reason and faith. We cannot come to know something unless we are moved by love; or, for that matter, love something which does not strike us as reasonable.

If truth and goodness go together, so too do knowledge and love. This unity leads to consistency in life and thought, that ability to inspire demanded of every good educator.
In the second place, we need to recognize that truth itself will always lie beyond our grasp. We can seek it and draw near to it, but we cannot completely possess it; or put better, truth possesses us and inspires us. In intellectual and educational activity the virtue of humility is also indispensable, since it protects us from the pride which bars the way to truth.
We must not draw students to ourselves, but set them on the path toward the truth which we seek together. The Lord will help you in this, for he asks you to be plain and effective like salt, or like the lamp which quietly lights the room (cf. Mt 5:13).
All these things, finally, remind us to keep our gaze fixed on Christ, whose face radiates the Truth which enlightens us. Christ is also the Way which leads to lasting fulfilment; he walks constantly at our side and sustains us with his love. Rooted in him, you will prove good guides to our young people"

The United Kingdom does not have a Catholic University. There were attempts to set one up after Catholic Emancipation. However Blessed John Newman`s attempts failed (or rather, were thwarted). The attempt by Cardinal Manning to set one up in Kensington, London was a disaster.
Thus we have a situation unlike the United States, and many parts of Continental Europe.
Therefore we have a situation in the United Kingdom where primary and secondary education is well catered for but not tertiary education.
Apart from a rather meagre presence in some chaplaincies in some universities, there is no Catholic presence or influence in British universities. Considering that most young people strive to obtain places for three years in such institutions often living away from home, is it no wonder that there is a problem ?
The environment in most British universities is secular, and determinedly so.
The Pope`s citation from Plato is quite apt: “Seek truth while you are young, for if you do not, it will later escape your grasp” (Parmenides, 135d).
If the truth is not available at such a formative stage of young person`s development, are we surprised if later on the Church has no place in their lives at a later date, or if very few young people wish to take up a religious vocation ?
Perhaps for too long Bishops have ignored the Tertiary sector especially in the more modern universities and they are now reaping the whirlwind.
Posted by Unknown at 11:20 am