The Reception of the Virgin 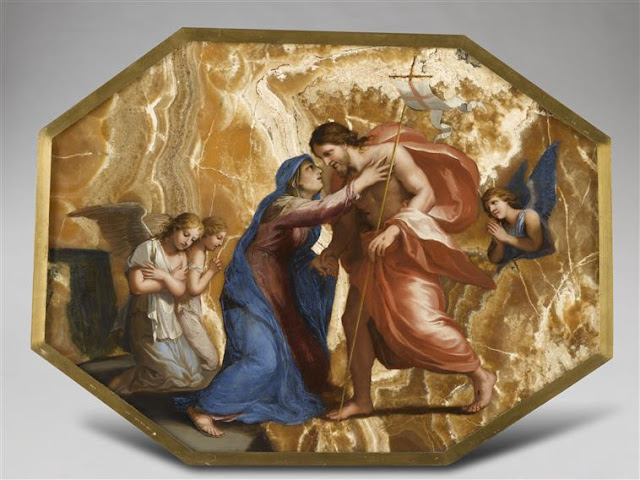 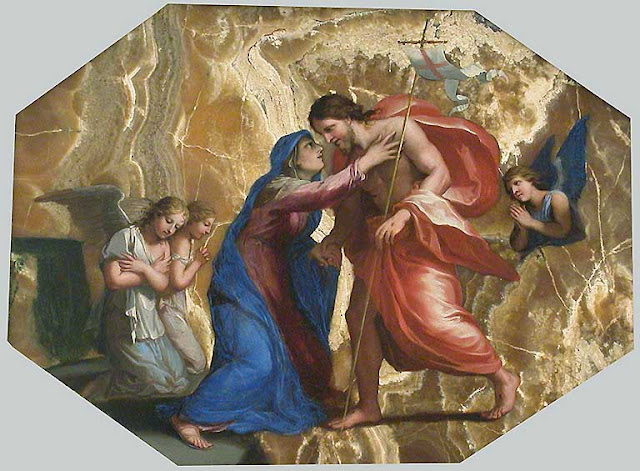 Jacques Stella (1596-1657)
Jésus Christ reçoit la Vierge dans le ciel
Oil on alabaster
31cm x 40cm
Musée du Louvre, Paris
Saint Germanos I, Patriarch of Constantinople from 715 - 730, defender of icon veneration was also a great advocate of the Virgin Mary. Here in one of his sermons he speaks of her Koimesis, or Dormition:

"May it never happen Most Holy Mother of God, that Heaven and earth, honoured by your presence, and you, with your departure, leave men and women without your protection? No. It is impossible to think of such things. In fact, just as when you were in the world you did not feel foreign to the realities of Heaven so too after you had emigrated from this world, you were not foreign to the possibility of communicating in spirit with mankind....
You did not at all abandon those to whom you had guaranteed salvation... in fact, your spirit lives in eternity nor did your flesh suffer the corruption of the tomb. You, O Mother, are close to all and protect all, and although our eyes are unable to see you, we know, O Most Holy One, that you dwell among all of us and make yourself present in the most varied ways....
You Mary, reveal your whole self, as is written, in your beauty. Your virginal body is entirely holy, entirely chaste, entirely the dwelling place of God so that, even for this reason, it is absolutely incorruptible. It is unchangeable since what was human in it has been taken up in incorruptibility, remaining alive and absolutely glorious, undamaged, and sharing in perfect life.
Indeed, it was impossible that the one who had become the vase of God and the living temple of the most holy divinity of the Only Begotten One be enclosed in the sepulchre of the dead.
On the other hand, we believe with certainty that you continue to walk with us"
St. Germanus of Constantinople (c.630 - 730/742) , In Sanctae Dei Genetricis Dormitionem, Sermo I. (PG 98, coll. 344B-346B, passim).

As well as being quoted with approval by Pope Benedict XVI, Germanos` words were also cited and quoted by Pope Pius XII in Munificentissimus Deus (1950),
Inspired by his friendship with Nicolas Poussin, whom he met in Rome in 1623, Jacques Stella became one of the foremost practitioners of the French classical style in painting.
In Italy, first under Cosimo II de Medici in Florence then under Pope Urban VII in Rome, he produced jewel-like paintings that were executed in a highly polished manner on marble, slate, lapis lazuli, or copper supports. The mineral or metal became an indispensable part of the work
Later he returned to France to work for Cardinal Ruchelieu and in the French Court of Louis XIII
He was very religious artist
In the above work on the Assumption and in the work below we see Stella`s masterly portrayal of the intimate and indissoluble connection between Christ and his mother, Mary. 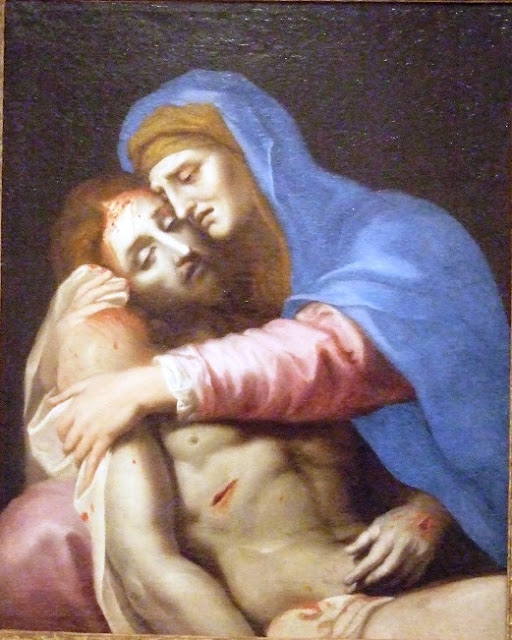