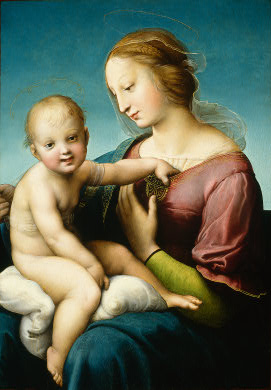 
Alma Redemptoris Mater (Kindly Mother of the Redeemer) is the great Latin hymn to Mary written in the 11th century by the monk Hermann Contractus. (Herman the Cripple) (1013–1054)
One of the great Marian antiphons, it is probably too early in the Liturgical Year for it to be sung. Yet we are approaching the great feast of the Assumption....

"Kindly Mother of the Redeemer, who art ever of heaven
The open gate, and the star of the sea, aid a falling people,
Which is trying to rise again; thou who didst give birth,
While Nature marvelled how, to thy Holy Creator,
Virgin both before and after, from Gabriel's mouth,
Accepting All hail, be merciful towards sinners"

Blessed Pope John Paul II was very familiar with the Antiphon. He preached on it for his first General Audience in 2004 (7th January 2004)
The antiphon forms the basis for his Conclusion and peroration of his great Marian Encyclical Redemptoris Mater (25th March 1987)
Why is the Anitphon appropriate for the Assumption ? In his General Audience of 7th January 2004, Blessed Pope John Paul II explained:

"All the other aspects of Our Lady's mission derive from the fact that she is "Mother of God".
They are clearly indicated by the titles with which the community of Christ's disciples honours her in every part of the world.
First of all, those of "The Immaculate" and "Our Lady of the Assumption", since the One who was to bring forth the Saviour could obviously not be subject to the corruption that derived from original sin ...
On the Cross, at the supreme moment of the accomplishment of his redeeming mission, it was Jesus who bequeathed to everyone his own Mother as a precious legacy of the Redemption.
The words of the crucified Lord to John, his faithful disciple, constitute his testament. He entrusts John to his Mother, and at the same time consigns to Mary's love the Apostle and every believer."