The Baptist, The Witness, The Catechist, The Evangelist 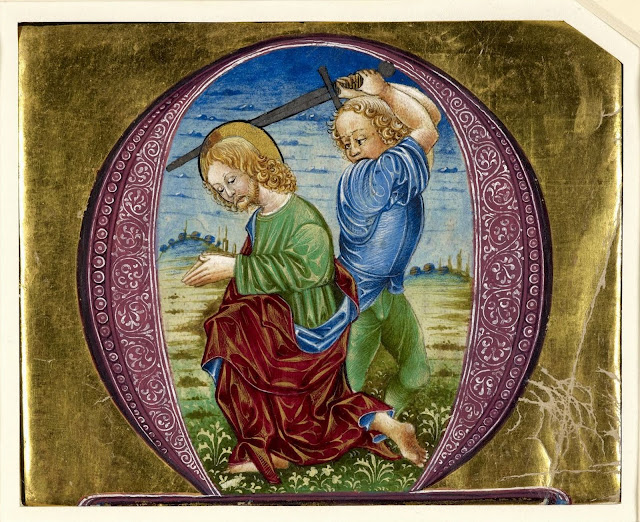 Historiated initial 'O' of the beheading of John the Baptist Cuttings from a choir book c. 1475
Additional 18197, ff. A and H
The British LIbrary, London 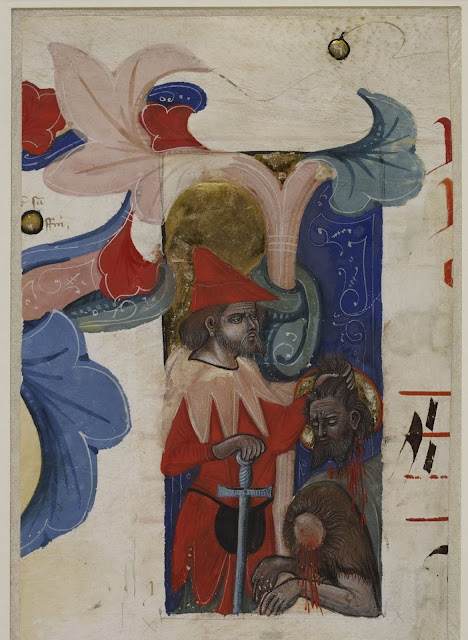 Historiated and foliate initial 'L' of the Martyrdom of John the Baptist with the executioner holding up the saint’s severed head.
Cutting from a choir book
Italy, N. (Bologna); Last quarter of the 14th century
Additional 71119D
The British Library, London 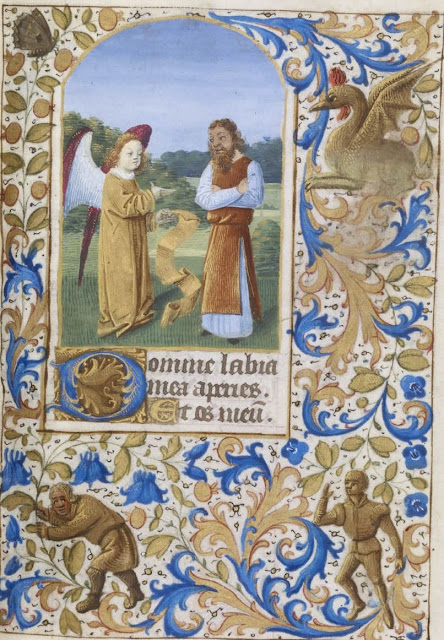 Miniature of John the Baptist with an angel, decorated initial 'D'(omine) and foliate borders including hybrid and human figures, at the beginning of the Hours of John the Baptist
France, Central (Angers?); c. 1450 - c. 1460
Harley 5764 f. 81
The British Library, London 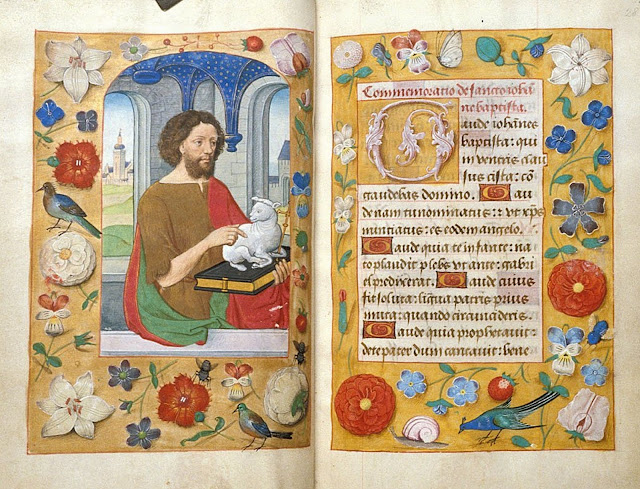 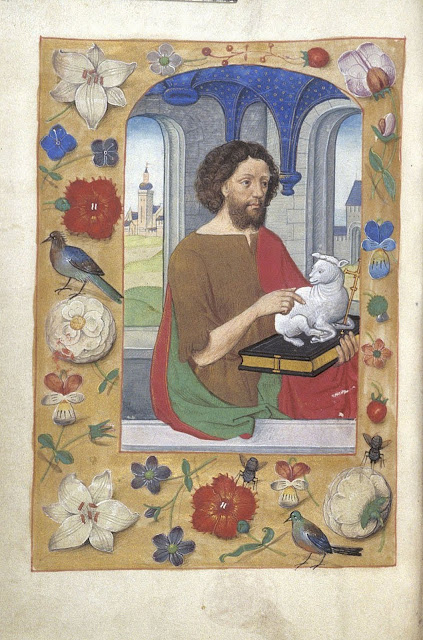 "The Lamb of God
29 The next day he saw Jesus coming towards him and declared, ‘Here is the Lamb of God who takes away the sin of the world!
30This is he of whom I said, “After me comes a man who ranks ahead of me because he was before me.” 31I myself did not know him; but I came baptizing with water for this reason, that he might be revealed to Israel.’
32And John testified, ‘I saw the Spirit descending from heaven like a dove, and it remained on him. 33I myself did not know him, but the one who sent me to baptize with water said to me, “He on whom you see the Spirit descend and remain is the one who baptizes with the Holy Spirit.”
34And I myself have seen and have testified that this is the Son of God.’*
The First Disciples of Jesus
35 The next day John again was standing with two of his disciples, 36and as he watched Jesus walk by, he exclaimed, ‘Look, here is the Lamb of God!’ "

Blessed Pope John Paul II set as an example for Catechists and Teachers of Religion, the great figure of Saint John the Baptist
In his homily in 2000, the Pope said:

"1. "Prepare the way of the Lord, make his paths straight" (Lk 3: 4). Today John the Baptist speaks to us in these words.
In a certain sense, his ascetic figure embodies the meaning of this time of expectation and preparation for the Lord's coming. In the desert of Judea he proclaims that the time has come for the fulfilment of the promises and that the kingdom of God is at hand: it is therefore urgent to forsake the ways of sin and believe in the Gospel (cf. Mk 1: 15).
What figure could be more fitting for your Jubilee than John the Baptist, dear catechists and Catholic religion teachers?...
2. In the Baptist you are rediscovering today the fundamental features of your ecclesial service. By taking him as your model, you are encouraged to examine the mission entrusted to you by the Church.
Who is John the Baptist?
First of all he is a believer personally committed to a demanding spiritual journey, consisting of attentive and constant listening to the Word of salvation. He also bears witness to a way of life that is detached and poor; he shows great courage in proclaiming God's will to everyone, even to its ultimate consequences. He does not yield to the easy temptation to take a prominent role, but humbly lowers himself to exalt Jesus.
Like John the Baptist, the catechist too is called to point out Jesus as the awaited Messiah, the Christ. His task is to invite people to fix their gaze on Jesus and to follow him, for Jesus alone is the Teacher, the Lord and the Saviour.
Like the Precursor, it is Christ and not himself whom the catechist must emphasize. Everything must be directed to him: to his coming, to his presence, to his mystery.
The catechist must be a voice that refers to the Word, a friend who leads to the Bridegroom. And yet, like John, he too is indispensable in a certain sense, because the experience of faith always needs a mediator who is also a witness.
Who among us does not thank the Lord for an effective catechist - a priest, a man or woman religious, a lay person - to whom we owe our first practical and engaging explanation of the Christian mystery? "