The Assumption of the Virgin with Saints Julian and Minias 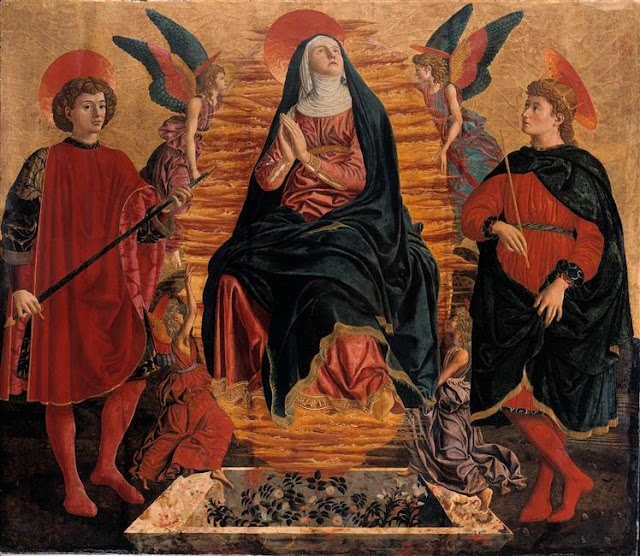 Andrea del Castagno (1423/1428-1457)
The Assumption of the Virgin with Saints Julian and Minias
1449-1450
Tempera and gold on poplar wood panel
1.31 x 1.507 m
Gemäldegalerie (SMPK), Berlin
On 20 November 1449 the Rector of the church of San Miniato alle Torri in Florence (Lionardo di Francesco di Nardo de' Falladanzi da Orte) commissioned Andrea del Castagno to paint an altarpiece depicting Our Lady of the Assumption with Saints Miniato and Julian
The result was this remarkable work. It was one of the highlights and main sights of the Church. No doubt it provided holy inspiration for generations of Florentines.
The church (dating from at least the 11th century) was demolished around 1888. It was the site of the execution of St Miniato whose head was later taken and buried in what is now the Church of San Miniato above the city.
The church sadly was demolished during the Reconstruction of Florence in the area around the Old Market. The work itself is now in Berlin
Saint Julian the Hospitaller (the figure on the left) was the patron of travellers. The Paternoster of St Julian is mentioned in Boccaccio's Decameron, His legend was widespread in medieval Europe. It is narrated in The Golden Legend
The legend is now simply regarded as legend not historical fact.
The painting is a beautiful work. By a great artist. He was also responsible for the enormous equestrian fresco of Nicolò da Tolentino in the Florence Duomo, and the Famous Men and Women cycle of nine portraits in the Villa Legnaia (now in the Uffizi) including the portraits of Boccaccio, Dante and Petrarch. But perhaps the artist although a great artist was not that great a man.
Vasari said of him:

"[T]hat miserable Andrea dal Castagno, who was truly great and excellent in painting and design, but even more notable for the rancour and envy that he bore towards other painters, insomuch that with the blackness of his crime he concealed and obscured the splendour of his talents....
Now Andrea, having carried this work very nearly to completion, being blinded by envy of the praises that he heard given to the talent of Domenico [Veneziano], determined to remove him from his path; and after having thought of many expedients, he put one of them into execution in the following manner.
One summer evening, according to his custom, Domenico took his lute and went forth from S. Maria Nuova, leaving Andrea in his room drawing, for he had refused to accept the invitation to take his recreation with Domenico, under the pretext of having to do certain drawings of importance. Domenico therefore went to take his pleasure by himself, and Andrea set himself to wait for him in hiding behind a street corner; and when Domenico, on his way home, came up to him, he crushed his lute and his stomach at one and the same time with certain pieces of lead, and then, thinking that he had not yet finished him off, beat him grievously on the head with the same weapons; and finally, leaving him on the ground, he returned to his room in S. Maria Nuova, where he put the door ajar and sat down to his drawing in the manner that he had been left by Domenico.
Meanwhile an uproar had arisen, and the servants, hearing of the matter, ran to call Andrea and to give the bad news to the murderer and traitor himself, who, running to where the others were standing round Domenico, was not to be consoled, and kept crying out: "Alas, my brother! Alas, my brother!"
Finally Domenico expired in his arms; nor could it be discovered, for all the diligence that was used, who had murdered him; and if Andrea had not revealed the truth in confession on his death-bed, it would not be known now"

His promising career was cut short by the plague in 1457
Posted by Unknown at 11:01 pm