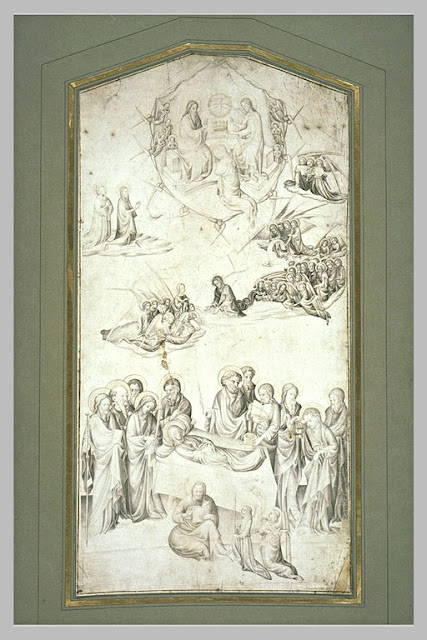 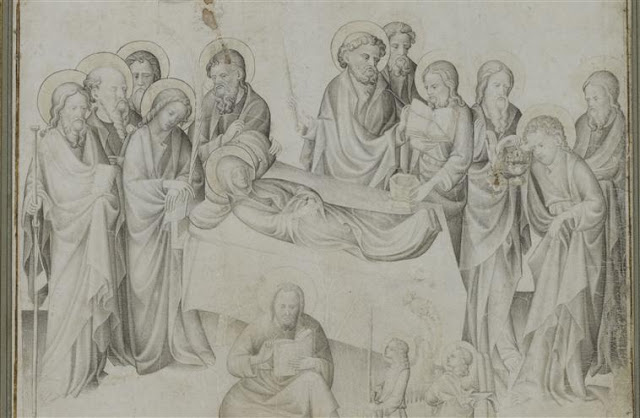 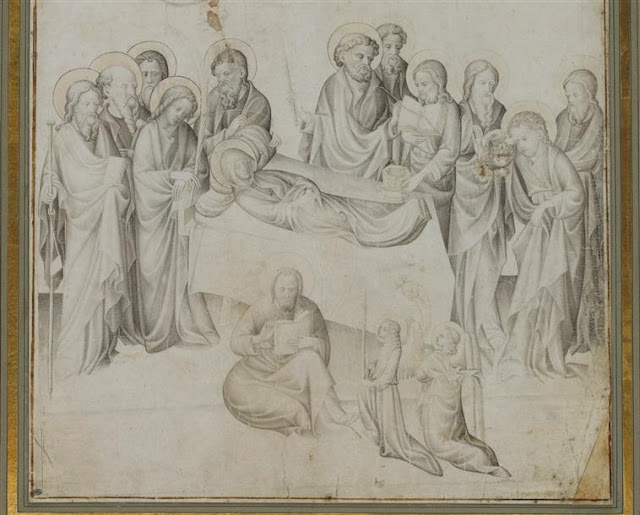 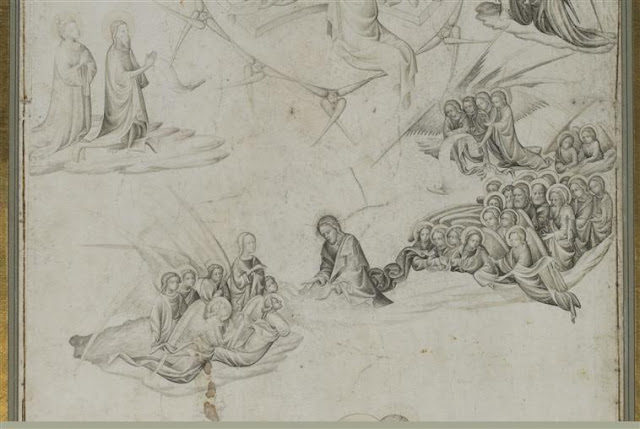 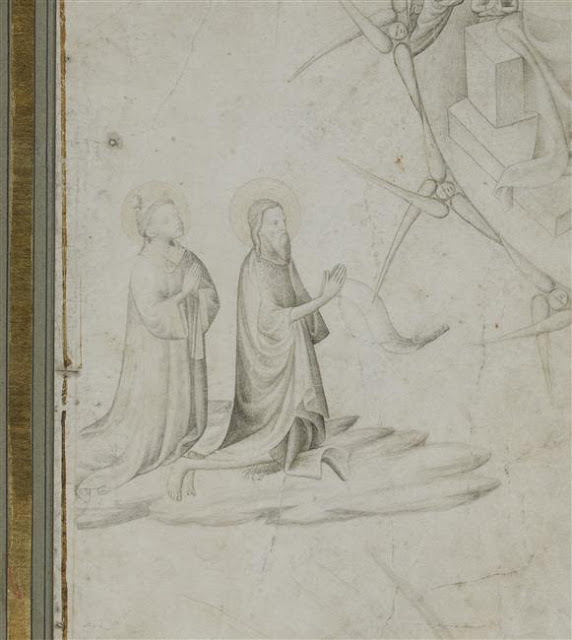 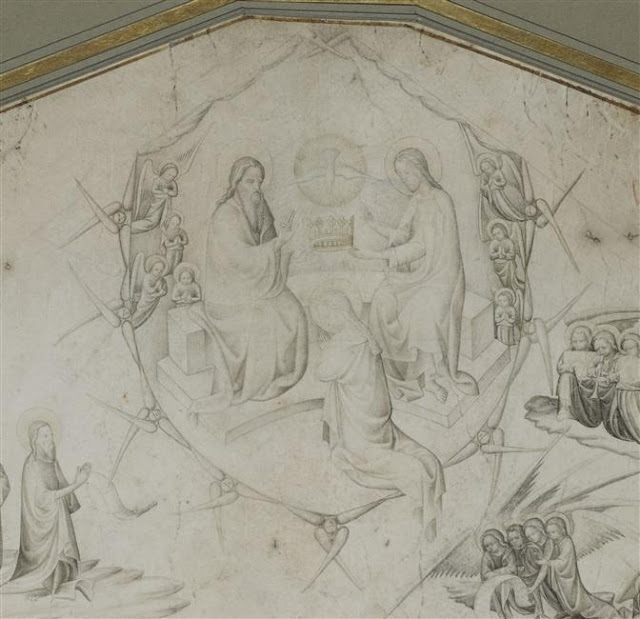 André Beauneveu ca.1335-1401
Les obsèques de la Vierge, et la Vierge reçue au Ciel
The Death of the Virgin and the Virgin received into Heaven
Drawing on vellum: grey ink and pencil
65 cm x 32.6 cm
Musée du Louvre, D.A.G (Département des Arts graphiques), Paris
André Beauneveu was an Early Netherlandish sculptor and painter, born in the County of Hainaut (Valenciennes is today in France),
He worked for the French court, Louis de Mâle, Count of Flanders, and the Duc de Berry
In 1364 he was commissioned by the King of France, Charles V, to create a group of royal tombs at St Denis.
In the 1370s he oversaw another ambitious funerary project, for Louis de Mâle, Count of Flanders, at Courtrai, whilst continuing to undertake major civic commissions at Ypres, Mechelen and his home town of Valenciennes.
As a sculptor he was described by the chronicler Jean Froissart as someone "who had no better nor equal in any land" (‘ne le pareil en nulles terres’ )
Along with artists such as Jacquemart de Hesdin, Beauneveu introduced an entirely new way of viewing the world, observing in detail the myriad aspects of nature, depicting settings with a kind of truthfulness that was new to painting. It was the beginning of a new movement in the history of Northern European art.
As regards the work, The Assumption of Mary is the Fourth Glorious Mystery of the Rosary
The Catechism para 966 describes it thus:

The Catechism quotes from the Troparion in Byzantine Liturgy, for the Feast of the Dormition, August 15th:

"In giving birth you kept your virginity; in your Dormition you did not leave the world, O Mother of God, but were joined to the source of Life. You conceived the living God and, by your prayers, will deliver our souls from death"

Last year was the 60th Anniversary of the Definition of the Dogma of the Assumption by Pope Pius XII. Pope Benedict XVI celebrated the Feast of the Assumption on 15th August in The Parish of St Thomas at Castel Gandolfo where he delivered a lengthy homily on the Assumption
He reflected on a number of themes but in particular one aspect of the definition of the Dogma: what does it mean when it is said that Mary was assumed into heavenly glory, body and soul.
He said:

"I would like to reflect on an aspect of the affirmation of the dogma where assumption into heavenly glory is mentioned.
All of us today are well aware that by the term "Heaven" we are not referring to somewhere in the universe, to a star or such like; no. We mean something far greater and far more difficult to define with our limited human conceptions.
With this term "Heaven" we wish to say that God, the God who made himself close to us, does not abandon us in or after death but keeps a place for us and gives us eternity. We mean that in God there is room for us.
To understand this reality a little better let us look at our own lives.
We all experience that when people die they continue to exist, in a certain way, in the memory and heart of those who knew and loved them. We might say that a part of the person lives on in them but it resembles a "shadow" because this survival in the heart of their loved ones is destined to end. God, on the contrary, never passes away and we all exist by virtue of his love. We exist because he loves us, because he conceived of us and called us to life. We exist in God's thoughts and in God's love. We exist in the whole of our reality, not only in our "shadow".
Our serenity, our hope and our peace are based precisely on this: in God, in his thoughts and in his love, it is not merely a "shadow" of ourselves that survives but rather we are preserved and ushered into eternity with the whole of our being in him, in his creator love. It is his Love that triumphs over death and gives us eternity and it is this love that we call "Heaven": God is so great that he also makes room for us.
And Jesus the man, who at the same time is God, is the guarantee for us that the being-man and the being-God can exist and live, the one within the other, for eternity.
This means that not only a part of each one of us will continue to exist, as it were pulled to safety, while other parts fall into ruin; on the contrary it means that God knows and loves the whole of the human being, what we are. And God welcomes into his eternity what is developing and becoming now, in our life made up of suffering and love, of hope, joy and sorrow. The whole of man, the whole of his life, is taken by God and, purified in him, receives eternity.
Dear Friends! I think this is a truth that should fill us with deep joy.
Christianity does not proclaim merely some salvation of the soul in a vague afterlife in which all that is precious and dear to us in this world would be eliminated, but promises eternal life, "the life of the world to come". Nothing that is precious and dear to us will fall into ruin; rather, it will find fullness in God. Every hair of our head is counted, Jesus said one day (cf. Mt 10: 30).
The definitive world will also be the fulfilment of this earth, as St Paul says:

"Creation itself will be set free from its bondage to decay and obtain the glorious liberty of the children of God" (Rom 8: 21).

Then we understand that Christianity imparts a strong hope in a bright future and paves the way to the realization of this future. We are called, precisely as Christians, to build this new world, to work so that, one day, it may become the "world of God", a world that will surpass all that we ourselves have been able to build.
In Mary taken up into Heaven, who fully shares in the Resurrection of the Son, we contemplate the fulfilment of the human creature in accordance with "God's world". "

On the Vatican website there is an article (in Italian only) on the liturgical aspects of the Feast of the Assumption of Mary
It is by Mons. Guido Marini, the Master of Pontifical Liturgical Celebrations He discusses the homily of the Pope and the centrality of the theme of Mary being assumed into heavenly glory, body and soul. He illustrates how certain Church practices and ceremonies attempt to express what is contained in the full meaning of The Assumption.
As can be seen from the Pope`s homily and the article by Mons. Guido Marini, central to the Doctrine is a clear understanding of the "Resurrection Chapter" in Saint Paul`s First Letter to the Corinthians (Chapter 15)
Posted by Unknown at 12:10 pm