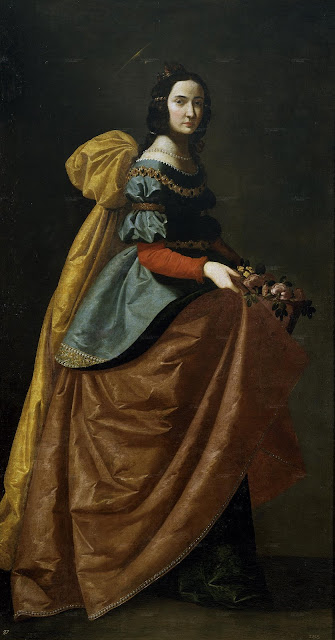 Francisco de Zurbarán 1598 - 1664
Santa Isabel de Portugal / Saint Isabel of Portugal
1635
Oil on canvas
184 cm x 98 cm
Museo Nacional del Prado, Madrid
Zurbarán has portrayed the saint as wearing the clothes of the 17th century notwithstanding the fact that Saint Isabel of Portugal (1271 – 4 July 1336)lived centuries before.
Here is a contemporary image of the saint. It is her former tomb showing her effigy. It is in the Mosteiro de Santa Clara-a-Nova in Coimbra, Portugal. It is by the sculptor Mestre Pero 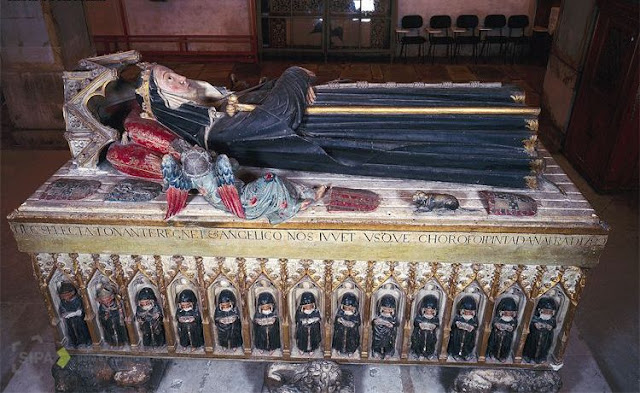 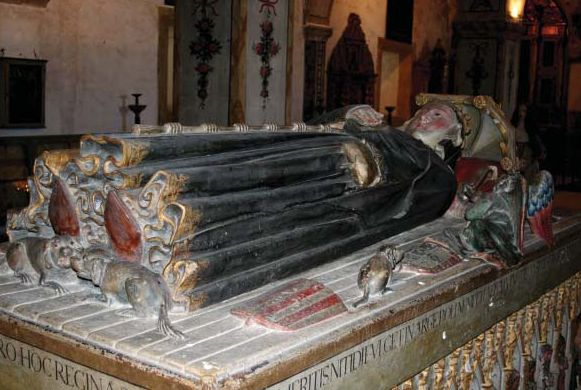 Of this historic monastic complex where the body of the Saint is venerated, you can read the full classification on the official Portuguese website (unfortunately only in Portuguese)
The saint is renowned as "the Great Peacemaker". On several occasions she intervened successfully to prevent wars
In this picture Zurbarán depicts her holding roses in her gown. There is a legend that she transformed money into roses. The transformation into roses was a common theme in the hagiography of saints from the time of Saint Isabel of Hungary (a relative of Saint Isabel of Portugal who was canonised in 1225)
It is however true that she did set up foundations for the poor and financed them royally. One of the institutions which she set up was the Convent of Santa Clara in Coimbra where she herself took on the habit of a Franciscan.
Indeed on a number of occasions she took her turn serving the Poor Clare nuns at table in the Convent.
Zurbarán`s work is a fine image depicting a saint, realistically depicted as a fine elegant noble lady but illumined with inner light («a lo divino»). She is shown has having the qualities of nobility and humility.
For more about this great Saint whose feast day approaches you might wish to look at the fine website of the Confraternity of Queen Saint Isabel (Confraria da Rainha Santa isabel) which is based in Coimbra
Here is a recent acquisition of The Lichtenstein Museum in Vienna. It shows St Elizabeth distributing alms. Interestingly the canvas of this work started out as a commission to show St Charles Borromeo distributing alms. However the commission changed and here we have the present work by Daniel Gran. 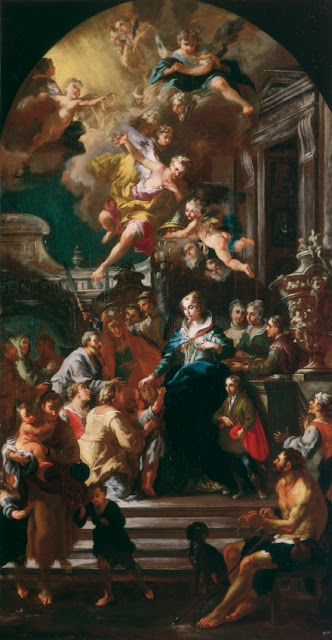