The Feast of St Bonaventure 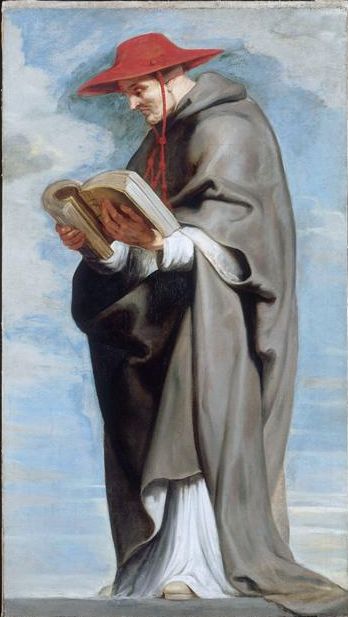 Peter Paul Rubens (1577-1640)
Saint Bonaventure
c. 1620
Oil on wood
1.480 m. x : 0.830 m.
Palais des Beaux-Arts, Lille
Giovanni di Fidanza known better as Saint Bonaventure of Bagnoregio (ca. 1217 to 15 July 1274) is generally called the second founder of the Franciscan Order.
In his time he was one of the most influential figures in Latin Christianity. This influence has lasted since his death. The present Pope in particular has studied the Life and writings of St Bonaventure and has been greatly influenced by him.
Franciscan friar, Master of Theology at the University of Paris, Minister General of the Franciscan Order, Cardinal of the Catholic Church, mystic, theologian, philosopher and Doctor of the Universal Church are among some of his accomplishments and roles.
His Master and teacher at Paris, the English Franciscan Alexander of Hales, ("Doctor irrefragabilis") said of his pupil`s spotless character that Bonaventure seemed to have escaped the curse of Adam's sin.
But of the modern Popes, it has not only been the present Pope who has expressed his admiration for St Bonaventure. Pope Leo XIII was another "fan". In Aeterni Patris (Restoration of Christian Philosophy) he quoted with approval the words of Pope Sixtus V:

"And with regard, venerable brethren, to the origin, drift, and excellence of this scholastic learning, it may be well here to speak more fully in the words of one of the wisest of Our predecessors, Sixtus V:

"By the divine favour of Him who alone gives the spirit of science wisdom, and understanding, and who thou ages, as there may be need, enriches His Church with new blessings and strengthens it with safeguards, there was founded by Our fathers, men of eminent wisdom, the scholastic theology, which two glorious doctors in particular angelic St. Thomas and the seraphic St. Bonaventure, illustrious teachers of this faculty, . . .with surpassing genius, by unwearied diligence, and at the cost of long labours and vigils, set in order and beautified, and when skilfuly arranged and clearly explained in a variety of ways, handed down to posterity" "