Rembrandt and the Face of Christ

Rembrandt Harmenszoon van Rijn (15 July 1606 – 4 October 1669) had a prodigious output: portraiture, landscape, etching and narrative painting.
One of his main themes was in the field of religious painting. The Louvre presently has an exhibition entitled Rembrandt and the Face of Jesus (Rembrandt et la figure du Christ)
It will soon be in the Philadelphia Museum of Art
The Jewish community in Amsterdam was a source of models for Rembrandt in his religious works. One of the themes of the exhibition is how Rembrandt`s faces of Christ reflect the Semitic origins of Jesus.
Depictions of Christ has always been controversial because of the Second Commandment. The Iconoclasts and the Protestant Reformers objected in principle to the depiction of the Divinity notwithstanding the Incarnation
Even if there was no objection based on the Second Commandment, the depiction of Jesus is always difficult because of the divine nature of Christ and the reverence due him.
But here we see in Rembrandt`s works, fully human and lifelike Jewish of first century Palestine. His Christ has emotions and is fully human. HIs Christ is no stylised icon.
In Rembrandt`s time the artistic depiction of Jesus provoked much debate
The exhibition has 85 different images of Christ by Rembrandt and his workshop. The exhibition catalogue says:

"With the creation of the dramatic Supper at Emmaus (Louvre) and a series of intimate oil sketches of Christ on oak panels, Rembrandt van Rijn (1606-1669) overturned the entire history of Christian art. Traditionally, when depicting Christ, artists had relied on rigidly copied prototypes and icons. Among Rembrandt's innovations was his use of a Jewish model to portray a Christ imbued with empathy, gentleness, grace, and faithfulness to nature"
(Rembrandt et la figure du Christ – Edited by Lloyd DeWitt (PMA), Blaise Ducos (Louvre) and George S. Keyes (DIA) ) 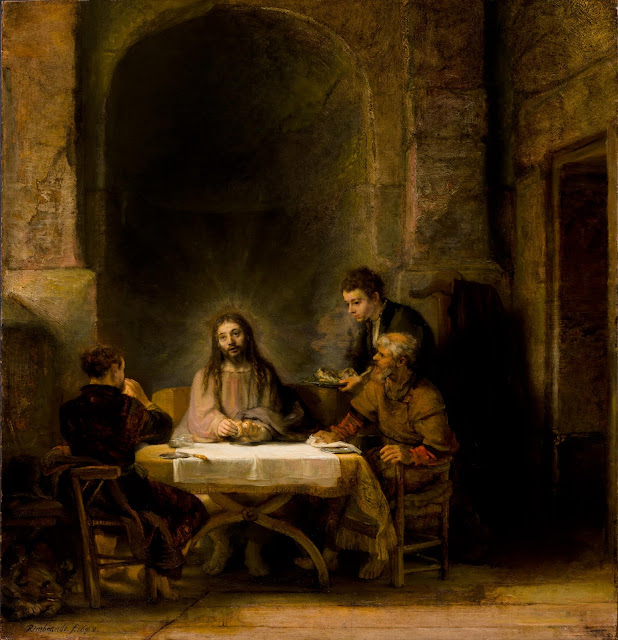 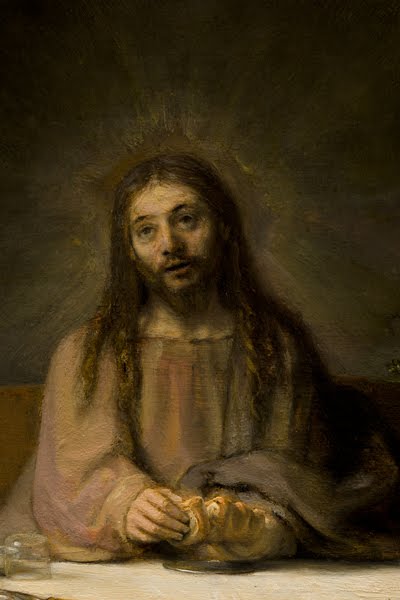 Rembrandt (Rembrandt Harmenszoon van Rijn) (1606 – 1669)
Les pèlerins d'Emmaüs/ Pilgrims at Emmaus (or The Supper at Emmaus) 1648
Oil on mahogany – H. 68 cm; W. 65 cm
Signed and dated bottom left: Rembrandt. f. 1648
Department of Paintings, Louvre, Paris, Inv. 1739
The face of Christ in the work in the Louvre can also be seen in a painting in the Detroit Institute of Arts, thus:

Again we see a similar Christ in this depiction now at Harvard:


Rembrandt (Rembrandt Harmenszoon van Rijn) (1606 – 1669)
Head of Christ
circa 1648-56
Oil on oak – H. 25 cm; W. 20 cm
Harvard Art Museums / Fogg Museum, Cambridge
To see the great faces of history is a natural desire.
Shortly after the deaths of Antony and Cleopatra, Suetonius narrates that in Egypt Augustus "had the sarcophagus and body of Alexander the Great brought forth from its shrine, and after gazing on it, showed his respect by placing upon it a golden crown and strewing it with flowers; and being then asked whether he wished to see the tomb of the Ptolemies as well, he replied, "My wish was to see a king, not corpses." "
For Augustus Alexander was a god and his great role model.
This desire to see our God is also a natural one. Rembrandt`s depiction of the face of Christ enthused the people of his age. It inspired many imitators and subsequent works by other artists. Eventually it gave way to other styles and depictions.
Blessed Pope John Paul II said this:

" "We wish to see Jesus" (Jn 12:21). This request, addressed to the Apostle Philip by some Greeks who had made a pilgrimage to Jerusalem for the Passover, echoes spiritually in our ears too during this Jubilee Year. Like those pilgrims of two thousand years ago, the men and women of our own day — often perhaps unconsciously — ask believers not only to "speak" of Christ, but in a certain sense to "show" him to them.
And is it not the Church's task to reflect the light of Christ in every historical period, to make his face shine also before the generations of the new millennium?
Our witness, however, would be hopelessly inadequate if we ourselves had not first contemplated his face. The Great Jubilee has certainly helped us to do this more deeply. At the end of the Jubilee, as we go back to our ordinary routine, storing in our hearts the treasures of this very special time, our gaze is more than ever firmly set on the face of the Lord. "
(Blessed Pope John Paul II, Apostolic Letter Novo Millennio Ineunte Para 16, 6th January 2001)