The Sacred Heart and St Gertrude of Helfta 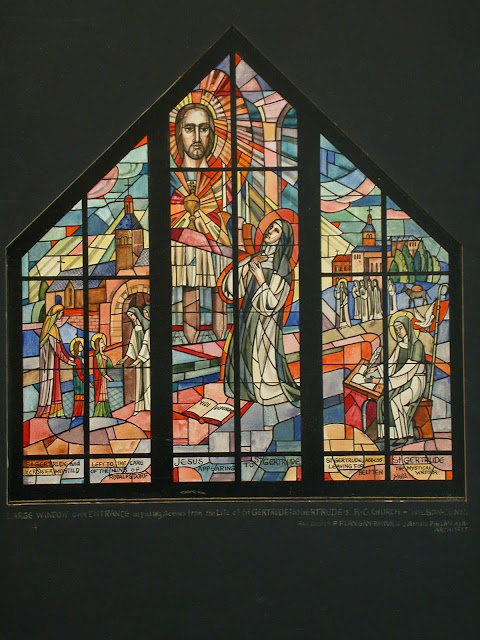 Lamb Studios is an ecclesiastical art firm, the oldest continuously operating stained glass studios in the United States.
Originally named the J & R Lamb Studios, it was established in New York City in 1857 by the English brothers Joseph (1833-1898) and Richard (1832-1909) Lamb.
The Lambs had for their credo “the beautifying of churches”
As can be seen from above it is a beautiful composition and there are various annotations on the drawing including Father [Joseph?] P. Flannigan, Pastor. He was the first resident pastor of the Church and was responsible for the construction of the beatiful Church around 1960
The archives of this great firm are in the Library of Congress from where the above image was taken.
The scene depicts Saint Gertrude the Great (or Saint Gertrude of Helfta) (January 6, 1256 – ca. 1302) the German Benedictine, mystic, and theologian who was one of the great sources of devotion to the Sacred Heart of Jesus
Also the patron saint of the Church in Windsor above.
I have already written before about St Gertrude - see the links below
Her great devotion to the Sacred Heart of Jesus can be seen from her biography The Revelations of St Gertrude. Of particular relevance is the importance to St Gertrude of St John the Apostle in her devotion. Here are some extracts:

"[On Good Friday] while they sang the Antiphon at Vespers, Vidi aquam egredientem - "I saw water springing forth" - the Lord said to Gertrude:

"Behold My Heart - let it be your temple; then go through the other parts of My Body, and arrange for the other parts of a monastery wherever it seems best for you; for I desire that My sacred Humanity should henceforth be your cloister."

"I know not how to seek or choose, because I have found such sweetness in Thy Heart, which Thou hast deigned to give me for a temple, that I can find neither repose nor rest out of it - two things which are absolutely necessary in the cloister".

If you desire it, said the Saviour, you can still find these two things in My Heart; for have you not heard that there are persons that never leave My house even for food and rest, like St. Dominic? "

The Revelations of Saint Gertrude the Great Book III Chapter 24

"This Apostle [St John] also appeared to the Saint as she assisted at Matins, on His Feast, when she applied with special fervour to her usual exercises.
Gertrude then recommended some of the religious of whom she had charge very fervently to him; he received her prayer very lovingly, and said.

The Saint inquired: "What grace, then and what benefit can I hope for, who am so unworthy on your dear Feast?"
"Come" he replied:

"come with me, thou elect one of my Lord. and let us repose together on the sweetest bosom of the Lord, in which all the treasures of beatitude lie hidden".

Then taking her up in spirit, he presented her to our living Saviour; and having placed her on His right, he placed himself on the left, and reposed there.
Then he exclaimed, pointing reverently to the bosom of Jesus:

"Behold, this the Saints of saints, who draws to Himself all that is good in Heaven and on earth!"

Then she inquired of St.John why he had placed himself on the left hand, and had given the right to her.
He replied:

"It is because I have become one spirit with God and am able to penetrate where flesh cannot enter; but you are not yet able to penetrate into such high things, because you are still in the flesh. I have therefore placed you at the opening of the Divine Heart, from whence you may drink in all the sweet consolations which flow from it with such impetuous abundance, that is capable of satisfying all who desire to taste thereof. "

Then, as she felt the constant pulsations of the Divine Heart, and rejoiced exceedingly thereat, she said to St. John:

"Beloved of God, didst thou feel those pulsations when you wert lying on the Lord's breast at the Last Super?"

"and this with such plenitude, that liquid does not enter so rapidly into bread than the sweetness of those pleasures penetrated my soul, so that my spirit became more ardent than water under the action of a glowing fire."

"And why" she inquired: "have you neither said nor written anything of this for our edification?"
He replied:

"Because I was charged with instructing the newly formed Church concerning the mysteries of the uncreated Word, that those truths might be transmitted to future ages, as far as they would be capable of comprehending them, for no one can comprehend them entirely; and I deferred speaking of these Divine pulsations until later ages, that the world might be aroused from its torpor, and animated when it had grown cold, by hearing of these things".

Then as she contemplated St. John reposing on the bosom of Our Lord, he said to her:

"I now appear to you in the same form as when I lay on the bosom of My beloved Lord and only Friend at the Last Supper; but if you wish it, I will obtain for you the favour of beholding me in the form in which I now enjoy the delights of Heaven".

And as she desired this favour very ardently, she beheld an immense ocean within the Heart of Jesus, in which St John appeared to float with ineffable joy and perfect freedom; and she learned that the Saint became so filled and inebriated with the torrent of pleasure which he tasted in God that a vein came from his heart, whereby he poured forth the sweet waters of the Divinity - that is to say, his instructions, and above all, his Gospel - over the face of the earth."
The Revelations of Saint Gertrude the Great Book IV Chapter 4

"[St Gertrude] heard a most melodious sound, as of a sweet harper harping upon his harp and these words were sung to her.

And the Lord Himself explained the meaning of this canticle to her, saying:

This rapture continued for an hour, and the Saint was drawn in a miraculous manner into the Heart of Jesus, through this sacred channel of which we have spoken, so that she found herself happily reposing in the bosom of her Lord and Spouse.
What she felt, what she saw, what she heard, what she tasted, what she learned of the words of life, she alone can know, and they who, like her, are worthy to be admitted to this sublime union with their Spouse Jesus, their soul's true love, Who is God, blessed forever. Amen.
The Revelations of Saint Gertrude the Great Book IV Chapter 23

These are the thoughts and sentiments which inspired and suffuse these traditional Catholic hymns: