The Irish PM and the Cloyne Report 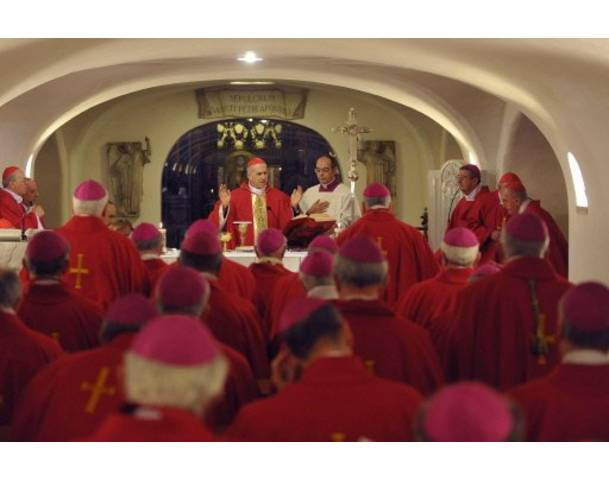 Cardinal Bertone celebrating Mass with Ireland`s bishops
In Britain this is the "Silly Season". We have had non=stop coverage of Rupert Murdoch and his family. In Ireland the talk is of The Cloyne Report.
The Irish Prime Minister is riding the reaction to the publication of the Cloyne Report for all that he can.
His approval ratings are at an all time high
Yesterday, during a debate before the lower chamber of the Irish Parliament, he launched an unprecedented, full fledged attack on the Holy See,
Relations between the Irish Government and the Vatican are said to be at "a historic low"
Why is the Vatican in the firing line ?
In the Cloyne Report mention is made of the fact that in 1996 the Irish bishops approved Guidelines for dealing with priests accused of sexual abuse. It would seem however that in 1997 the Vatican papal nuncio at the time Archbishop Luciano Storero, sent a letter to the Irish bishops, conveying the decision of the Congregation for Clergy that a major plank of the policies should not be carried out.
That is as far as the Cloyne Report goes.
However it would appear that in January 2011 the Irish TV station RTE broadcast a documentary entitled "Unspeakable Crimes".  Is it this programme and not The Cloyne Report which is the source and fuel of the Prime Minister`s attack on the Vatican ?
The programme alleged that

"Archbishop Storero— a veteran Vatican diplomat who was nuncio in Ireland from 1995 until his death in 2000—said that the policy of mandatory reporting “gives rise to serious reservations of both a moral and a canonical nature.”
The letter from Archbishop Storero, which had previously been kept confidential, was apparently furnished to the RTE investigation by an Irish bishop.
Archbishop Storero indicated that if the Irish bishops followed their policies, and took disciplinary action against abusive priests, those priests might appeal their cases to Rome and find a sympathetic response from the Congregation for Clergy.
The papal nuncio said that Congregation would, “at the appropriate time,” provide more complete directions on handling sex-abuse complaints.
Cardinal Dario Castrillon Hoyos, who at the time was the prefect of the Congregation for Clergy, met with the Irish bishops a year later. The discussion of sex-abuse policy at that meeting was highly contentious, the RTE program reported, with then-Archbishop (later Cardinal) Desmond Connell of Dublin pounding the table in frustration at the Vatican prelate’s stance.
The RTE programme implied that the decisions of Cardinal Castrillon Hoyos represented the official policies of the Vatican."

In other words RTE blamed the then nuncio (conveniently dead) and Cardinal Castrillon Hoyos (then prefect of the Congregation for Clergy in 1996 - 8) of over-ruling the Irish bishops. In 1996 until the new 2001 Rules by the Vatican on child abuse, cases of child abuse were dealt with by the Congregation of the Clergy/

After 2001, when the new rules were promulgated by the Vatican, responsibility passed to the "new broom", the then Cardinal Ratzinger and his Department, the CDF. The programme`s attack on Pope Benedict is completely without foundation.
Cardinal Desmond Connell, the retired Archbishop of Dublin, came out quite well in the RTE investigation as well as some other Irish bishops who protested against the alleged "Storero- Castrillon Hoyos" line
Catholic Culture did an article at the time pointing out the inaccuracies and misrepresentations in the programme.
It is referred to for its terms
Now, the Archbishop of Dublin, Diarmuid Martin , in an exclusive interview with the Vatican Insider avers that “There are some small circles that are defying the rules of the Irish bishops. A change in mentality is needed and this cannot happen over night”
He was asked why the Irish Prime Minister had attacked the Vatican.
He replied:

"“I believe the Prime Minister was referring above all to interactions – which I was unaware of – which took place with the Vatican while the Cloyne Report was being prepared and to a now “historical” speech made by the Congregation for the Clergy. The Prime Minister did not name the Pope directly or criticise the laws of the current Congregation for the Doctrine of the Faith. They have undoubtedly been a great support in encouraging the Church in Ireland and elsewhere, in an attempt to follow a clear cut and consistent course of action against paedophilia.”

Later on in the interview he was asked two questions and made the following replies:

"The Cloyne Report has shown that in Ireland, there have been bishops who even after the guidelines put in place by the Holy See in 2001, have continued to underestimate the seriousness of the abuse problem, and have acted without giving timely or adequate answers. Why is this?
“There are still some small circles that are defying the rules in place for Irish bishops. Around the diocese of Cloyne there was a group that, following its own interpretation of “canon law”, actually chose not to apply the rules laid down by the Congregation for the Doctrine of the Faith, Cardinal Ratzinger’s rules that is.”
In a television interview you said there is a group that is also showing defiance to Benedict XVI’s line of thought within the Vatican. To whom were you referring?
“I was referring to these circles, present in Ireland and perhaps in the Vatican, who are still not fully adhering to the rules in place, both the rules of the Irish Church and those of the Holy See. There needs to be a change in mentality and mentalities cannot be changed from one day to the next.”

The Irish episcopate would appear to be hopelessly split and at the moment floundering. One might suspect that relations between the Irish bishops are none too cordial. If they do not get their act together they will all hang together, But one would like to know who it was from the Irish episcopate disclosed the letter from Archbishop Storero which had previously been kept confidential. And why.

Presumably who ever disclosed the letter thought that the letter would exculpate some or most of the Irish bishops at the expense of the Vatican. Presumably the same person never ever thought that it would be used as a weapon to attack the Church and the Pope so viciously and for serious calls and attempts to break the Seal of the Confessional ?
Posted by Unknown at 9:24 pm