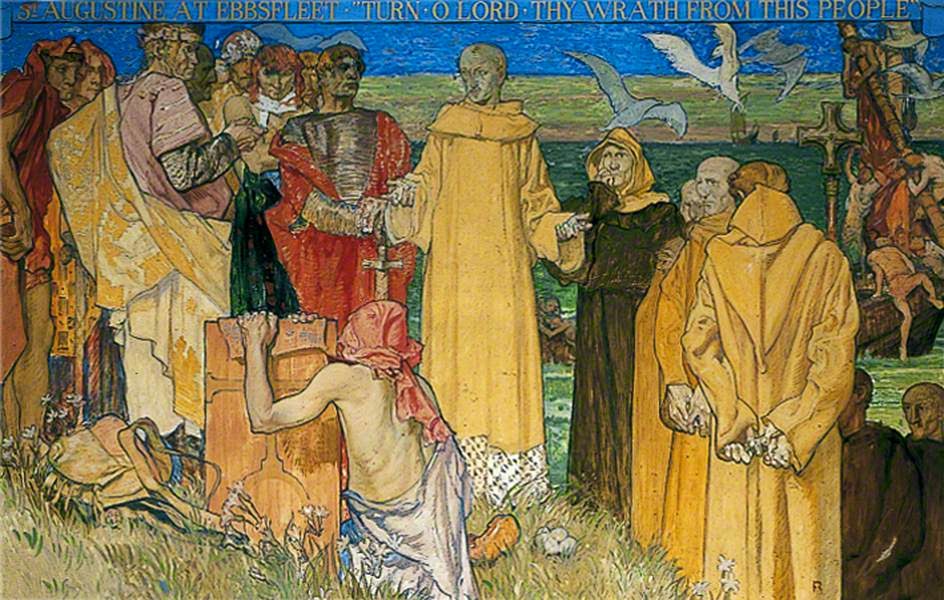 
Ebbsfleet is a hamlet near Ramsgate, Kent

In other parts of Britain there were already movements towards  conversion and reconversion. St Columba was already at lona in AD 563

According to legend,  the first meeting between King Ethelbert and the monk Augustine took place under an oak tree in 597 AD. Nearby was a stream, known as St Augustine's Well, where it is said that Augustine baptized his first convert and on Whit Sunday of 597 AD King Ethelbert himself was converted.

In 1884 St Augustine's Cross  was erected to commemorate the landing of St Augustine in AD 597 at Ebbsfleet.

Bede in his Ecclesiastical History of the English Nation, Book I, chapter 25 describes the scene in this way

"AUGUSTINE, thus strengthened by the confirmation of the blessed Father Gregory, returned to the work of the word of God, with the servants of Christ, and arrived in Britain.

The powerful Ethelbert was at that time king of Kent; he had extended his dominions as far as the great river Humber, by which the Southern Saxons are divided from the Northern.

On the east of Kent is the large Isle of Thanet containing according to the English way of reckoning, 600 families, divided from the other land by the river Wantsum, which is about three furlongs over, and fordable only in two places, for both ends of it run into the sea.

In this island landed the servant of our Lord, Augustine, and his companions, being, as is reported, nearly forty men.

They had, by order of the blessed Pope Gregory, taken interpreters of the nation of the Franks, and sending to Ethelbert, signified that they were come from Rome, and brought a joyful message, which most undoubtedly assured to all that took advantage of it everlasting joys in heaven and a kingdom that would never end with the living and true God.

The king having heard this, ordered them to stay in that island where they had landed, and that they should be furnished with all necessaries, till he should consider what to do with them.

For he had before heard of the Christian religion, having a Christian wife of the royal family of the Franks, called Bertha; whom he had received from her parents, upon condition that she should be permitted to practice her religion with the Bishop Luidhard, who was sent with her to preserve her faith.

Some days after, the king came into the island, and sitting in the open air, ordered Augustine and his companions to be brought into his presence.

For he had taken precaution that they should not come to him in any house, lest, according to an ancient superstition, if they practiced any magical arts, they might impose upon him, and so get the better of him.

But they came furnished with Divine, not with magic virtue, bearing a silver cross for their banner, and the image of our Lord and Saviour painted on a board; and singing the litany, they offered up their prayers to the Lord for the eternal salvation both of themselves and of those to whom they were come.

When he had sat down, pursuant to the king's commands, and preached to him and his attendants there present, the word of life, the king answered thus: ­

"Your words and promises are very fair, but as they are new to us, and of uncertain import, I cannot approve of them so far as to forsake that which I have so long followed with the whole English nation. But because you are come from far into my kingdom, and, as I conceive, are desirous to impart to us those things which you believe to be true, and most beneficial, we will not molest you, but give you favourable entertainment, and take care to supply you with your necessary sustenance; nor do we forbid you to preach and gain as many as you can to your religion."

Accordingly he permitted them to reside in the city of Canterbury, which was the metropolis of all his dominions, and, pursuant to his promise, besides allowing them sustenance, did not refuse them liberty to preach.

It is reported that, as they drew near to the city, after their manner, with the holy cross, and the image of our sovereign Lord and King, Jesus Christ, they, in concert, sung this litany:

"We beseech Thee, O Lord, in all Thy mercy, that thy anger and wrath be turned away from this city, and from the holy house, because we have sinned. Hallelujah." "