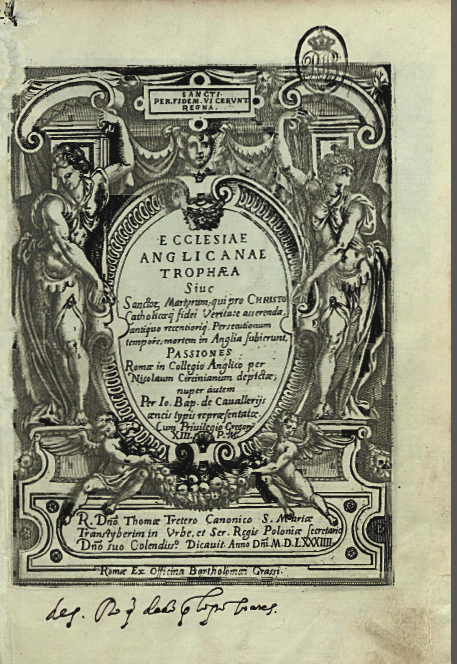 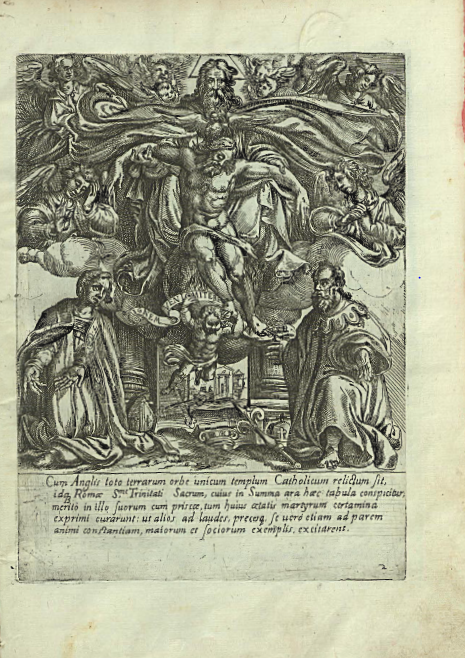 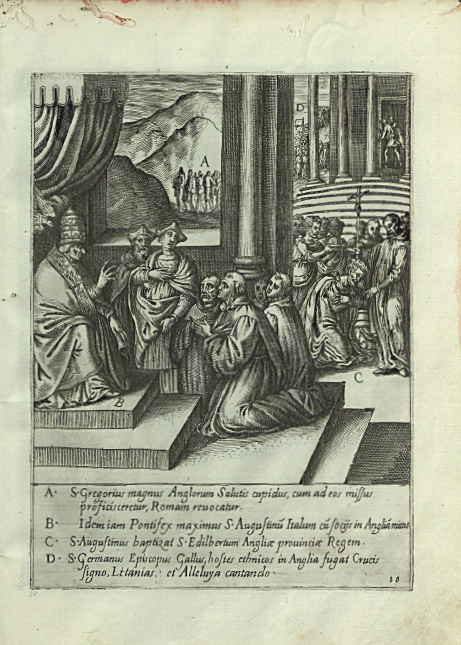 Ecclesiae anglicanae trophaea was printed at Rome by Bartolomeo Grassi in 1584.

However the later plates depict the deaths of English Catholics at the hands of the Tudor monarchs. It is the Catholic response to Foxe’s Actes and Monuments (known as Foxe's Book of Martyrs)

The Title plate has the title inscribed in a cartouche flanked by two figures adopting elegant contrapposto, two angels supporting the cartouche from below and holding a garland

There is the motto 'Sancti per fidem vicerunt regna'

The Iconography is Jesuit

Bede in his Ecclesiastical History of the English Nation, Book I, chapter 23 describes the main scene depicted:

"IN the year of our Lord 582, Maurice, the fifty ­fourth from Augustus, ascended the throne, and reigned twenty ­one years.

In the tenth year of his reign, Gregory, a man renowned for learning and behaviour, was promoted to the apostolical see of Rome, and presided over it thirteen years, six months and ten days.

He, being moved by Divine inspiration, in the fourteenth year of the same emperor, and about the one hundred and fiftieth after the coming of the English into Britain, sent the servant of God, Augustine, and with him several other monks, who feared the Lord, to preach the word of God to the English nation. they having, in obedience to the pope's commands, undertaken that work, were, on their journey, seized with a sudden fear, and began to think of returning home, rather than proceed to a barbarous, fierce, and unbelieving nation, to whose very language they were strangers; and this they unanimously agreed was the safest course.

In short, they sent back. Augustine, who had been appointed to be consecrated bishop in case they were received by the English, that he might, by humble entreaty, obtain of the Holy Gregory, that they should not be compelled to undertake so dangerous, toilsome, and uncertain a journey.

The pope, in reply, sent them a hortatory epistle, persuading them to proceed in the work of the Divine word, and rely on the assistance of the Almighty. The purport of which letter was as follows­

Let not, therefore, the toil of the journey, nor the tongues of evil speaking men, after you; but with all possible earnestness and zeal perform that which, by God's direction, you have undertaken; being assured, that much labour is followed by an eternal reward.

When Augustine, your chief, returns, whom we also constitute your abbot, humbly obey him in all things; knowing, that whatsoever you shall do by his direction, will, in all respects, be available to your souls. Almighty God protect you with his grace, and grant that I may, in the heavenly country, see the fruits of your labour.

In Inasmuch as, though I cannot labour with you, I shall partake in the joy of the reward, because I am willing to labour. God keep you in safety, my most beloved sons.

Dated the 23rd of July, in the fourteenth year of the reign of our pious and most august lord, Mauritius Tiberius, the thirteenth year after the consulship of our said lord. The fourteenth indiction."