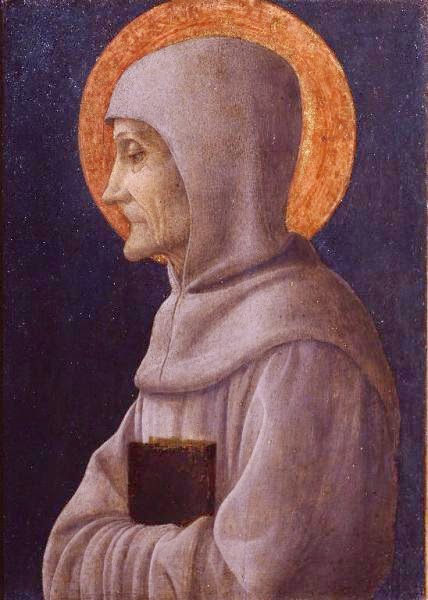 
This was not the first image (or last) of St Bernardino of Siena painted by the bizarre and restless artist known to history as Darius from Pordenone, Darius from Treviso, or even Darius from Udine

He did not seem to stay in one place for long

But he remained in the Veneto Region

His most important work was a work which was destroyed and no longer exists:  the Madonna della Misericordia between St. John the Baptist and Saint Bernardine. made in 1450 for the Church of San Bernardino in Bassano

Other images of the Saint by Darius include those now at the Museo Antoniano  in Padova, the Museo Poldi Pezzoli in  Milan and the County Museum of Art in Los Angeles

Today some of his themes (but only a few) are extremely controversial and no longer accepted: his tirades against gambling, usury, homosexuality

And it also has to be said he is not photogenic

He is always depicted as rather grim, definitely ascetic except perhaps those of Spanish painters like El Greco and Goya

But he was canonised scarcely six years after his death. He beat Pope Saint John Paul II to the altars

From the beginning of his pontificate, Pope Francis has strongly criticised gossip and backbiting

"Unity is superior to conflict, always! Conflicts, ifnot properly resolved, divide us from each other,separate us from God. Conflict can help us to grow,but it can also divide us. Let us not go down the pathof division, of fighting among ourselves! All united, allunited in our differences, but united, always: this is theway of Jesus.

Unity is superior to conflict. Unity is agrace for which we must ask the Lord that he mayliberate us from the temptation of division, of conflict between us, of selfishness, of gossip. How much evilgossip does, how much evil! Never gossip about others, never! "

Gossipers and backbiters were also a favourite target for St Bernardino of Siena.

However his polemic and invective go far beyond what Pope Francis might feel is decorous. Here is an example from one of the Saint`s sermons. The language in the translation is rather antique and perhaps we could do with a fresh translation:

"Qfttimes the backbiter goeth about with a show kmdness and speaketh evil of others.

He walketh under the shadow of a fair manner, seeming possessed of charity, and malice lurketh beneath.

Knowest thou what he doth resemble? He is like to a canker, and outwardly he is glossed over, and such men as these when they wish to hide their malice do after this fashion ; ere they speak of a thing they send before an ambassador. And knowest thou who this ambassador is ? They send forth a sigh,

What aileth thee, eh? What is it?  I have a great melancholy upon me ! Arid then he will begin and will say: Brother, what I am about to say, I will say for a good purpose, God knoweth it (and he giveth him the sure token ), in faith I wish to tell it thee. Such an one hath done such and such a thing'.

It seems to me that such another is doing a certain wrong, in my opinion. He doeth this or that, and to me it doth appear that he hath the wish to do thus and thus. And he will say very many things, and in all these he will lie in his throat.

This evil tongue that doth in this way is like to the scorpion, which doth perform three things, and all maliciously. First, it licketh with its tongue ; second, it encircleth with its claws, third, with its tail it doth twist it, and lift it into the air, and then it doth bite. In this samemanner doth the backbiter do ...

If thou seest that another doth evil, correct him ^o that which not with a slandering tongue, but with a kind manner, as  the Church hath taught thee. There are very many who see no other evil than that which their neighbour doth perform.

Art thou here, thou who seest no wrongdoing but that of others ? Pay heed to that which the Gospel saith when it telleth thee that thou seest the mote in the eye of thy neighbour and seest not the beam in thine own.