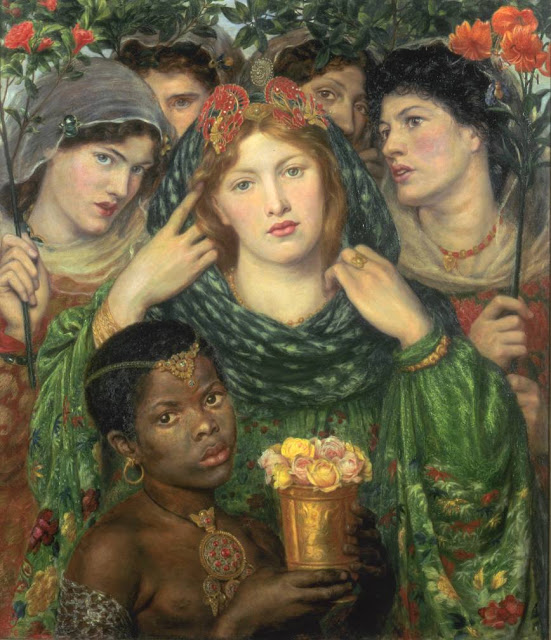 
Rossetti`s picture is in the Tate in London . It is being used for a poster on a major exhibition on the pre-Raphaelites

Just so that you would not miss the point, Rossetti inscribed the frame with lines from The Song of Solomon and Psalm 45:

Let him kiss me with the kisses of his mouth: for thy love is better than wine. (The Song of Solomon 1:2).

Gustave Moreau produced a series of works on the theme of  "the Shulamite", the woman from Shulem, the female protagonist in The Song of Songs 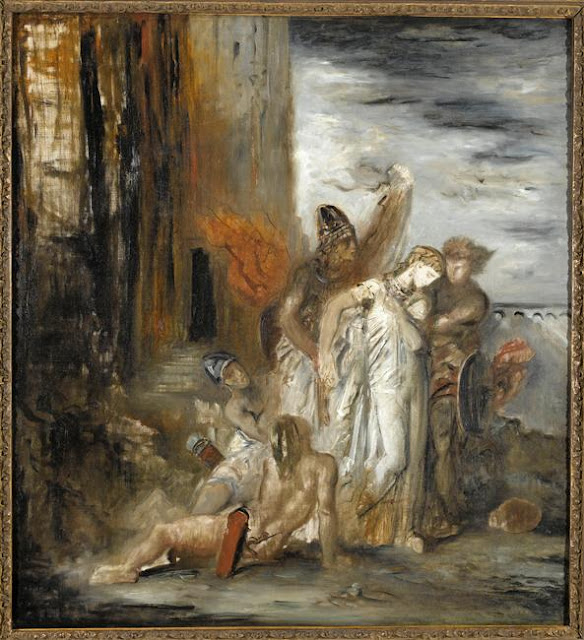 "At his leaving, my soul sank.
I sought him, but I did not find him;
I called out after him, but he did not answer me.

7 The watchmen found me,
as they made their rounds in the city;
They beat me, they wounded me,
they tore off my mantle,
the watchmen of the walls. 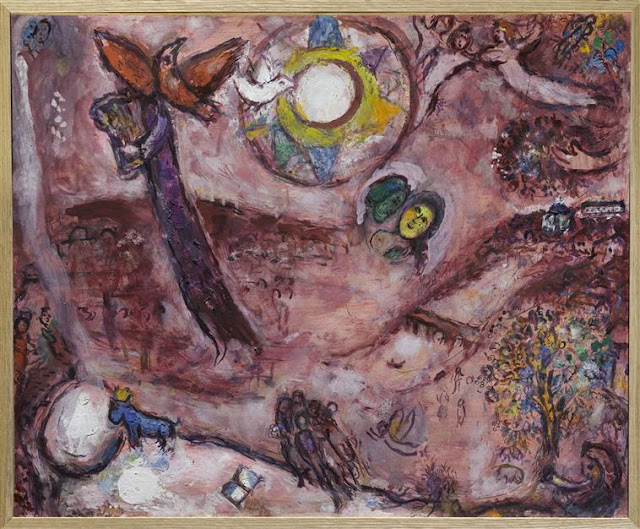 
The Song of Songs has three characters: the woman, the man, or the “Daughters of Jerusalem.”

From the interaction of the three voices we hear, see, touch,  smell and taste the tension, the passion, the longing, the excitement

"2 (Man)  How beautiful are your feet in sandals,
O noble daughter!
Your curving thighs like jewels,
the product of skilled hands.

3 Your valley, a round bowl
that should never lack mixed wine.
Your belly, a mound of wheat,
encircled with lilies.

4 Your breasts are like two fawns,
twins of a gazelle.

5 Your neck like a tower of ivory;
your eyes, pools in Heshbon
by the gate of Bath-rabbim.
Your nose like the tower of Lebanon
that looks toward Damascus.

6 Your head rises upon you like Carmel;
your hair is like purple;
a king is caught in its locks.

7 How beautiful you are, how fair,
my love, daughter of delights!

8 Your very form resembles a date-palm,
and your breasts, clusters.

9  I thought, “Let me climb the date-palm!
Let me take hold of its branches!
Let your breasts be like clusters of the vine
and the fragrance of your breath like apples,

(Woman)  that flows down smoothly for my lover,
gliding over my lips and teeth.

11 I belong to my lover,
his yearning is for me.

12 Come, my lover! Let us go out to the fields,
let us pass the night among the henna.

13 Let us go early to the vineyards, and see
if the vines are in bloom,
If the buds have opened,
if the pomegranates have blossomed;
There will I give you my love.

14 The mandrakes give forth fragrance,
and over our doors are all choice fruits;
Fruits both fresh and dried, my lover,
have I kept in store for you."

Since written this Book has inspired and still continues to inspire: both secular and divine

In 1999 Nick Cave the  Australian musician and  songwriter and  frontman of Nick Cave and the Bad Seeds,  delivered a lecture in Vienna The Secret Life Of The Love Song on the meaning and history of the love song

"Around the age of twenty, I stared reading the Bible and I found in the brutal prose of the Old Testament, in the feel of its words and its imagery, an endless source of inspiration.

The Song of Solomon, perhaps the greatest love song ever written, had a massive impact upon me.

Although the two lovers are physically separate – Solomon is excluded from the garden where his beloved sings – it is the wild, obsessive projections of one lover onto another that dissolve them into a single being, constructed from a series of rapturous love-metaphors. ...

The love song must be born into the realm of the irrational, absurd, the distracted, the melancholic, the obsessive, the insane for the love song is the noise of love itself and love is, of course, a form of madness.

Love songs come in many guises and are seemingly written for many reasons – as declarations or to wound – I have written songs for all of these reasons – but ultimately the love songs exist to fill, with language, the silence between ourselves and God, to decrease the distance between the temporal and the divine. ...

What I found, time and time again, in the Bible, especially the Old Testament, was that verses of rapture, of ecstasy and love could hold within them apparently opposite sentiments – hate, revenge, bloody mindedness etc. that they were not mutually exclusive. This idea has left an enduring impression on my songwriting.

Within the world of modern pop music, a world that deals ostensibly with the Love Song, but in actuality does little more that hurl dollops of warm, custard-coloured baby-vomit down the air waves, true sorrow is not welcome."