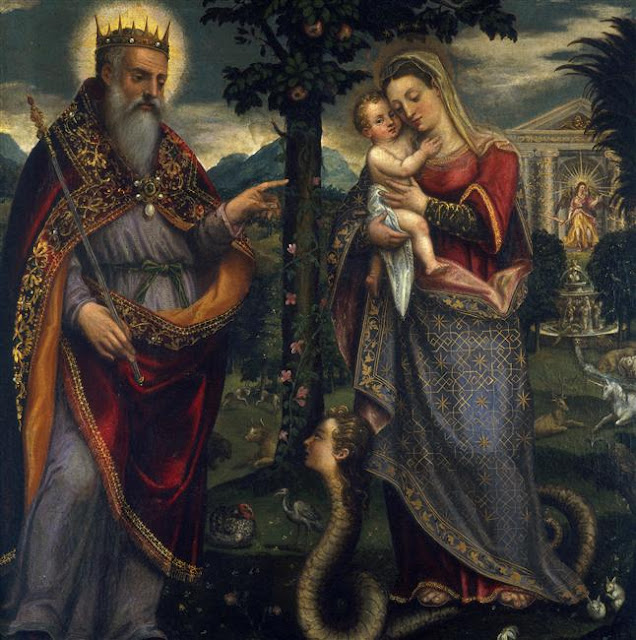 
Nowadays this is a rather unusual representation of The Immaculate Conception

We are more used to the Spanish iconography of the 16th and 17th centuries following the Jesuit based Francisco Pacheco. and then Bartolomé Murillo, Diego Velázquez, and Francisco Zurbarán

It is the Spanish iconography which is firmly in the ascendant today as seen in the image below: 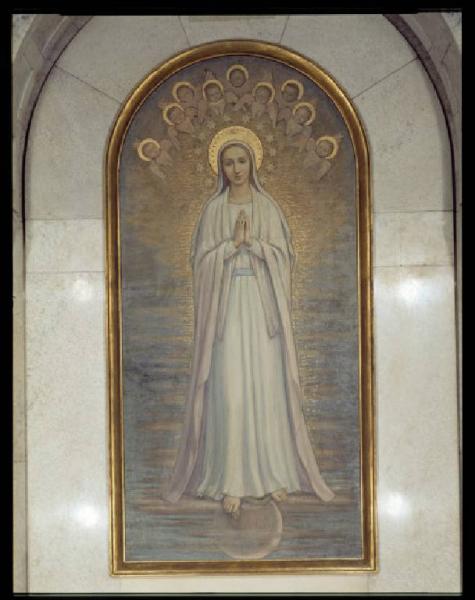 
Not much is known about the artist Mombello who was part of the Brescian school. He seems to have both been born and have died in the town of Orzivecchi in the province of Brescia

We do know that he obtained a number of commissions from religious confraternities, third orders
and other religious iinstitutions in the area around Brescia.

Many of these works by Mombello were on a Marian theme

The setting of the work is the Garden of Eden: the Terrestrial Paradise. It is not as in the more modern treatment somewhere in outer space. Mary`s feet are firmly on terra firma

The Scriptural reference is to Genesis 3: 15  God`s words to the snake after Adam and Eve had succumbed to temptation

"15 I will put enmity between you and the woman,
and between your offspring and hers;
They will strike at your head,
while you strike at their heel."

The painting depicts what is a historical event shortly after the beginning of the creation of Mankind. It is anchored in Time but outwith Time

It is not a scholarly abstraction that is being depicted

The snake is suitably terrified by the Divine words.

To emphasise his words God the Father is pointing at Mary, the new Eve who is holding the Saviour, She has been singled out by God from all mankind at the Dawn of Time

God has revealed the source of Man`s salvation at the Time of the Fall of Man: His Son through Mary

At the time of the Annunciation this was revealed to Mary herself "the favoured one":

"26 In the sixth month, the angel Gabriel was sent from God to a town of Galilee called Nazareth,

27 to a virgin betrothed to a man named Joseph, of the house of David, and the virgin’s name was Mary.

Slightly later when the pregnant Mary visits her cousin Elizabeth, we read again in Luke 1 that Mary is "blessed among all woman"

"41 When Elizabeth heard Mary’s greeting, the infant leaped in her womb, and Elizabeth, filled with the Holy Spirit,

42 cried out in a loud voice and said, “Most blessed are you among women, and blessed is the fruit of your womb.

43 And how does this happen to me, that the mother of my Lord* should come to me

44 For at the moment the sound of your greeting reached my ears, the infant in my womb leaped for joy.

45 Blessed are you who believed that what was spoken to you by the Lord would be fulfilled.”

In the picture Mary is clothed in blue with stars of gold. This is no ordinary cloak. Like God the Father, Mary is dressed regally. She has no crown or the regalia of God the Father. She is subservient to the Father

The cloak is similar to the cloak which Israel made for his beloved son Joseph. It was Joseph who had the dream of "the sun and the moon and eleven stars were bowing down to" him (See Genesis 37)

But there is no Adam to expel. Adam is dust.  But we now have the New Adam being held by the Virgin in the centre of the picture. We also have the new Eve

One is reminded of Revelation, Chapter 12  and the only mention of St Michael in the New Testament

"7 Then war broke out in heaven; Michael and his angels battled against the dragon. The dragon and its angels fought back,

13 Your branches are a grove of pomegranates,
with fruits of choicest yield:
Henna with spikenard,

14 spikenard and saffron,
Sweet cane and cinnamon,
with all kinds of frankincense;
Myrrh and aloes,
with all the finest spices

15 A garden fountain, a well of living water,
streams flowing from Lebanon.

16 Awake, north wind!
Come, south wind!
Blow upon my garden
that its perfumes may spread abroad.