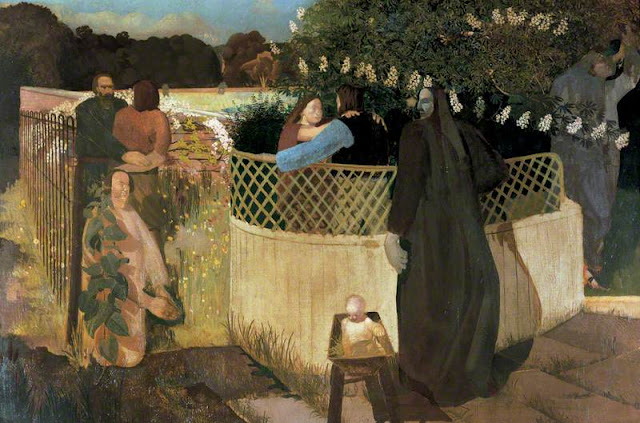 
This is one of the UCL Art Museum`s "Top Ten Objects". Spencer later explained the composition of this painting:

"The couple occupy the centre of the picture, Joseph who is to the extreme right doing something to the chestnut tree and Mary who stands by the manger; they appear in their relationship with the elements generally, so that Mary to the couple in contact with one another seems like some preonderating element of life, just another big fact of nature such as a tree or a waterfall or a field or a river. Joseph is only related to Mary in this picture by some sacramental ordinance... This relationship has always interested me and in those early works I contemplated a lot of those unbearable relationships between men and women. (Tate Gallery Archive, 733.2.85)"

Sadly both marriages of Spencer collapsed. They were sources of unhappiness and disenchantment

Yet he did not lose his Christian vision which prevailed

In most representations of the Nativity, the focus is on the child, then secondly on Mother and child, and possibly on Mother, child and putative father

Spencer`s composition is therefore an unusual one: to focus on the relationship between Mother (Mary) and putative father (St Joseph)

Mary and Joseph were betrothed. In that context Jesus was conceived

She was asked by God. She consented. Christ was conceived.

Perhaps its significance has now been lost through time. We do not understand the greatness of the decision of Joseph.

A flavour of the dilemma faced by St Joseph can be gleaned from the Catholic Encyclopedia`s entry on Betrothal , the Wikipedia entry on Breach of promise ("Heart balm") and the Jewish Encyclopedia (1906) on Marriage Laws

It is this relationship between Joseph and Mary which formed the basis of Blessed Pope John Paul`s meditation on the Life and Work of St Joseph: the Apostolic Exhortation  Redemptoris Custos ("the Guardian of the Redeemer")

"Analyzing the nature of marriage, both St. Augustine and St. Thomas always identify it with an "indivisible union of souls," a "union of hearts," with "consent."

These elements are found in an exemplary manner in the marriage of Mary and Joseph.

At the culmination of the history of salvation, when God reveals his love for humanity through the gift of the Word, it is precisely the marriage of Mary and Joseph that brings to realization in full "freedom" the "spousal gift of self" in receiving and expressing such a love.

"In this great undertaking which is the renewal of all things in Christ, marriage-it too purified and renewed-becomes a new reality, a sacrament of the New Covenant. We see that at the beginning of the New Testament, as at the beginning of the Old, there is a married couple. But whereas Adam and Eve were the source of evil which was unleashed on the world, Joseph and Mary arc the summit from which holiness spreads all over the earth. The Saviour began the work of salvation by this virginal and holy union, wherein is manifested his all-powerful will to purify and sanctify the family - that sanctuary of love and cradle of life.""