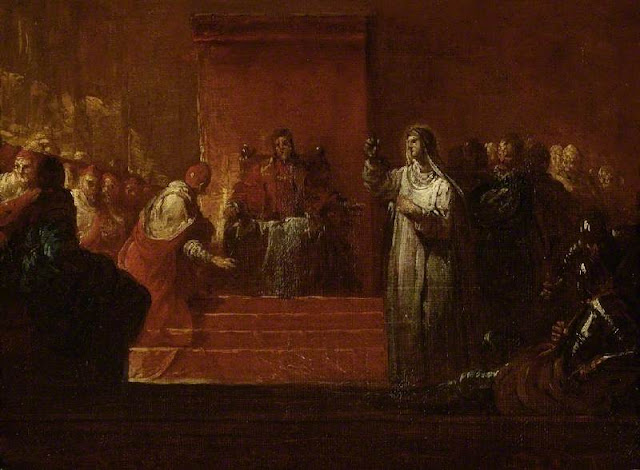 
A Venetian, Pellegrini travelled to England (where he stayed between 1708 and 1713) and extensively on the Continent

By tradition he is said to have been Christopher Wren's favoured painter.

(In 1710 Sir James Thornhill and Pellegrini were asked to produce a painted model for the decoration of the inside of the dome of St Paul's Cathedral with subjects from the Acts of the Apostles.but Thornhill was the favoured painter)

George Vertue (1683-1756), the English engraver and antiquary described him as  'A talle, proper man of a great deal of fire and vivacity'

He was part of the international Rococo movement.

In June 1376 Saint  Catherine went to Avignon herself as ambassador of Florence to make peace with the Papal States. She also tried to convince Pope Gregory XI to return to Rome

In this extract of a letter which St Catherine sent to Pope Gregory XI in June - September 1376 we get some idea of how and what she said to him in person to persuade him to return:

"Oh what joy, if we were to see the Christian people giving the seasoning of faith to the unbelievers!

For once these had received the light they would become perfect, like a new plant. And once the Holy Spirit's warmth and light had, through holy faith, displaced the chill of unbelief, they would produce the flowers and fruits of virtue in the mystic body of holy Church.

So by the fragrance of their virtue they would help eliminate the vice and sin, the pride and filth that are rampant among the Christian people—especially among the prelates, pastors, and administrators of holy Church who have turned to eating and devouring souls, not converting them but devouring them!

And it all comes from their selfish love for themselves, from which pride is born, and greed and avarice and spiritual and bodily impurity. They see the infernal wolves carrying off their charges and it seems they don't care. Their care has been absorbed in piling up worldly pleasures and enjoyment, approval and praise.

And all this comes from their selfish love for themselves. For if they loved themselves for God instead of selfishly, they would be concerned only about God's honour and not their own, for their neighbours' good and not their own self indulgence.

Ah, my dear babbo, see that you attend to these things!

Look for good virtuous men, and put them in charge of the little sheep. Such men will feed in the mystic body of holy Church not as wolves but as lambs. It will be for our good and for your peace and consolation, and they will help you to carry the great burdens I know are yours.

It seems to me, gracious father, that you are like a lamb among wolves.

But take heart and don't be afraid, for God's providential help will always be with you.

Don't be surprised even though you see a great deal of opposition, and see that human help is failing us, and that those who should be helping us most disappoint us and act against us. Don't be afraid, but even more self-confident; don't give up or restrain your sweet holy desire, but let it be more enkindled with each day that passes.

Up, father! Put into effect the resolution you have made concerning your return and the crusade

You can see that the unbelievers are challenging you to this by coming as close as they can to take what is yours.

Up, to give your life for Christ! Isn't our body the only thing we have?

Why not give your life a thousand times, if necessary, for God's honour and the salvation of his creatures? That is what he did, and you, his vicar, ought to be carrying on his work. It is to be expected that as long as you are his vicar you will follow your Lord's ways and example".

In another letter to the Pope she warned him:

"Don't make it necessary for me to complain about you to Christ."