The Very Soul of the Church 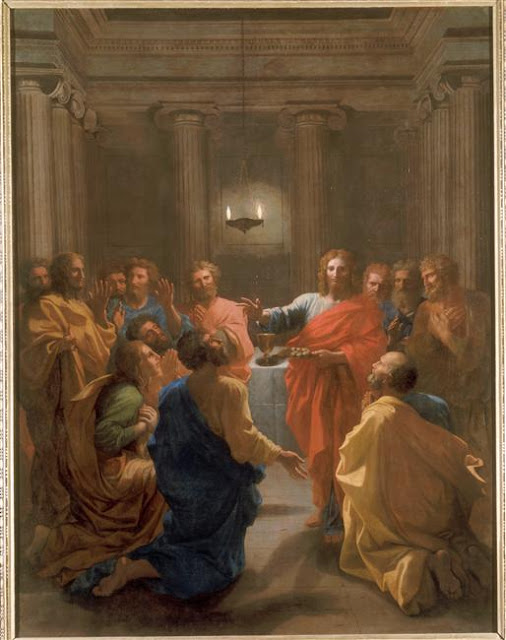 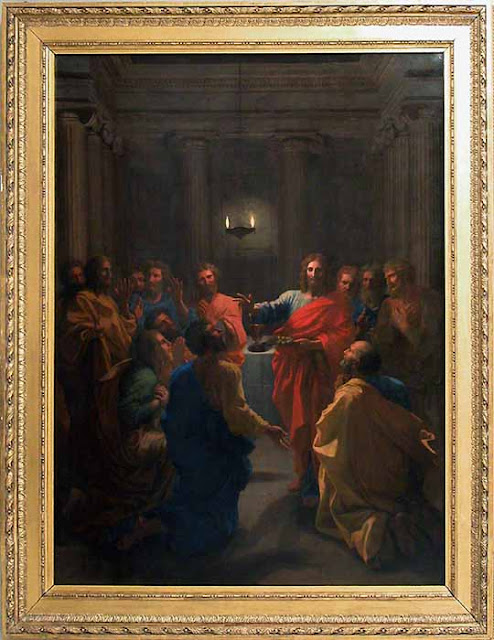 Poussin chose to illustrate the Seven Sacraments by scenes of the life of Christ. He evoked the Eucharist by the founding episode of the Last Supper before the Passion.
This representation of the Eucharist was commissioned by Louis XIII for the Chapel of the château de Saint-Germain-en-Laye
Poussin of course portrayed several versions of the same theme.
In this version we do not see Christ seated at table with his disciples. Here Christ has got up from the table. In one hand is the broken bread, the other the cup with wine. He is distributing these to the kneeling apostles.
The principal figure is Christ. He has our attention. There is no other figure which competes with this figure. It has something of a divine air. The apostles have a touch of the Hebraic in their features.
The architecture of the setting is Grecian - a temple where the classical ideas of beauty, the perfect are embodied. It is not the Upper Room.
Christ and the spostles are dressed in what appears to be Roman dress ?
This is not merely a depiction of a historical event. It is the depiction of an event which transcended time and place.
In this week has fallen the Great feast of Corpus Christ. In 1902 on the vigil of Corpus Christi Pope Leo XIII published his great Encyclical on the Eucharist, Mirae Caritatis.
In it he described the Sacrament of the Eucharist as "the very soul of the Church".
Here is part:

"14....This Sacrament [the Eucharist], whether as the theme of devout meditation, or as the object of public adoration, or best of all as a food to be received in the utmost purity of conscience, is to be regarded as the centre towards which the spiritual life of a Christian in all its ambit gravitates; for all other forms of devotion, whatsoever they may be, lead up to it, and in it find their point of rest.
In this mystery more than in any other that gracious invitation and still more gracious promise of Christ is realised and finds its daily fulfilment: "Come to me all ye that labour and are heavily burdened, and I will refresh you" (St. Matt. xi., 28).
15. In a word this Sacrament is, as it were, the very soul of the Church; and to it the grace of the priesthood is ordered and directed in all its fulness and in each of its successive grades.
From the same source the Church draws and has all her strength, all her glory, her every supernatural endowment and adornment, every good thing that is here; wherefore she makes it the chiefest of all her cares to prepare the hearts of the faithful for an intimate union with Christ through the Sacrament of His Body and Blood, and to draw them thereto. And to this end she strives to promote the veneration of the august mystery by surrounding it with holy ceremonies ...
16. History bears witness that the virtues of the Christian life have flourished best wherever and whenever the frequent reception of the Eucharist has most prevailed. And on the other hand it is no less certain that in days when men have ceased to care for this heavenly bread, and have lost their appetite for it, the practice of Christian religion has gradually lost its force and vigour"
Pope Leo XIII, Mirae Caritatis (On the Holy Eucharist) (28th May 1902)(The Vigil of the Solemnity of Corpus Christi)