The Ascension of Christ the Saviour 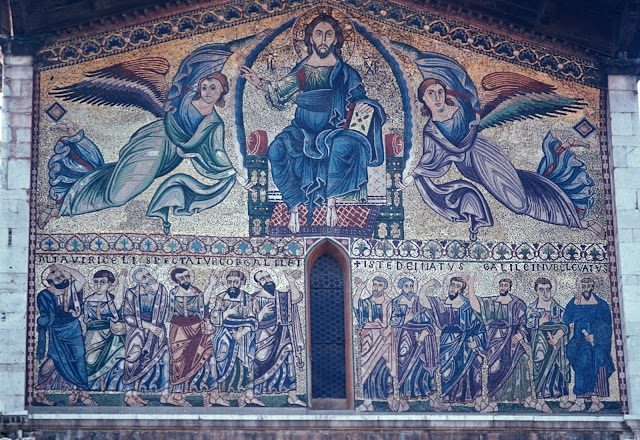 Partially by the workshop of Berlinghiero Berlinghieri (d. about 1236)
The Ascension of Christ the Saviour
c. 13th century
Mosaic
The Basilica of San Frediano, Lucca
One of the most beatiful sights in the medieval city of Lucca in Italy is the Basilica of San Frediano.
It is crowned with a huge golden mosaic of The Ascension of Christ the Saviour which dates back to the twelfth century.
The Church itself is first mentioned in historical records in AD 685
An ascending Christ in a starry Heaven surrounded by angels is watched by the Apostles and Mary. It is a triumphant work celebrating a triumphant but deeply mysterious event.
One is reminded of a story about St Benedict of Nursia which Pope Benedict XVI related in a Homily at Second Vespers in a Visit to the Benedictine Archabbey of Monte Cassino on Sunday, 24 May 2009
He said:

" I would like here to mention an extraordinary event in [St Benedict`s] life related by St Gregory the Great, his biographer, and which is certainly well known to you. One might almost say that the holy Patriarch was also "carried up into Heaven" in an indescribable mystic experience.
On the night of 29 October 540, we read in the biography, while leaning out of the window,

"his eyes fixed on the stars and wrapt in divine contemplation, the Saint felt that his heart was burning... for him the starry firmament was like the embroidered curtain that veiled the Holy of Holies. At a certain point, his soul felt transported to the other side of the veil, to contemplate unveiled the Face of the One who dwells in inaccessible brightness" (cf. A.I. Schuster, Storia di san Benedetto e dei suoi tempi, Ed. Abbazia di Viboldone, Milan, 1965, p. 11 and ff.).

...[For] St Benedict ... subsequent to this extraordinary spiritual experience, a new life had to begin. Indeed, although the vision was but fleeting the effects endured, his features themselves, the biographers say, were altered by it, his expression always remained serene and his behaviour angelic and although he lived on earth it was obvious that his heart was already in Paradise." 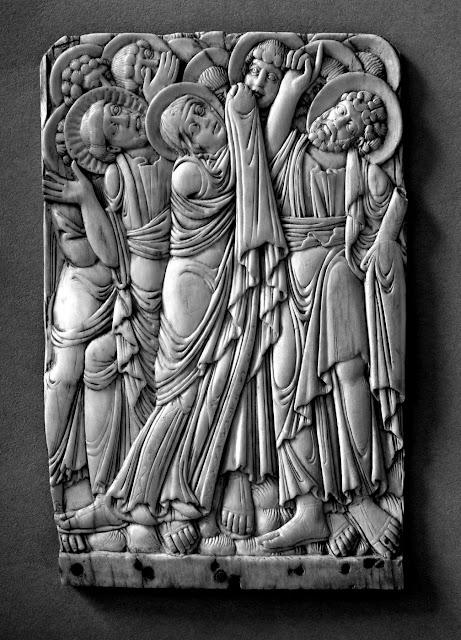 Mary and the Apostles at the Ascension of Christ
c. 801 -815
Kabinett Hüpsch
Hessisches Landesmuseum, Darmstadt
The Gospels are not specific where or when the event happened. But they are agreed that it did happen and the most complete account is in Acts Chapter 1, verses 1 - 12:

"1 In my former book, Theophilus, I wrote about all that Jesus began to do and to teach
2 until the day he was taken up to heaven, after giving instructions through the Holy Spirit to the apostles he had chosen.
3 After his suffering, he presented himself to them and gave many convincing proofs that he was alive. He appeared to them over a period of forty days and spoke about the kingdom of God.
4 On one occasion, while he was eating with them, he gave them this command: “Do not leave Jerusalem, but wait for the gift my Father promised, which you have heard me speak about.
5 For John baptized with water, but in a few days you will be baptized with the Holy Spirit.”
6 Then they gathered around him and asked him, “Lord, are you at this time going to restore the kingdom to Israel?”
7 He said to them: “It is not for you to know the times or dates the Father has set by his own authority.
8 But you will receive power when the Holy Spirit comes on you; and you will be my witnesses in Jerusalem, and in all Judea and Samaria, and to the ends of the earth.”
9 After he said this, he was taken up before their very eyes, and a cloud hid him from their sight.
10 They were looking intently up into the sky as he was going, when suddenly two men dressed in white stood beside them.
11 “Men of Galilee,” they said, “why do you stand here looking into the sky? This same Jesus, who has been taken from you into heaven, will come back in the same way you have seen him go into heaven.”
12 Then the apostles returned to Jerusalem from the hill called the Mount of Olives, a Sabbath day’s walk from the city" 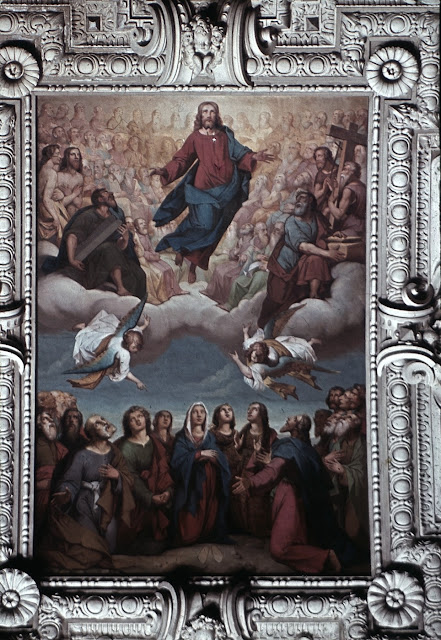 Donato Mascagni (1579–1636)
The Ascension of Christ 1623 - 1628
Fresco
The Cathedral (Dom) of Saints Rupert and Virgil, Salzburg
In 2009 on the Feast of the Ascension (24th May 2009) the Pope delivered a Homily on the Ascension at Cassino, on a visit to Cassino and Monte Cassino
First as regards the Ascension the Pope warned against looking at a single text or a single book of the New Testament. Instead he said we should listen " attentively to the whole of Sacred Scripture"
He then described several meanings of the Ascension.

"Christ's Ascension means in the first place the enthronement of the Crucified and Risen Son of Man, the manifestation of God's kingship over the world."

He then went on to discuss a deeper and more profound meaning of this event:

"To present the Lord wrapped in clouds calls to mind once and for all the same mystery expressed in the symbolism of the phrase, "seated at the right hand of God". In Christ ascended into Heaven, the human being has entered into intimacy with God in a new and unheard-of way; man henceforth finds room in God for ever.
"Heaven": this word Heaven does not indicate a place above the stars but something far more daring and sublime: it indicates Christ himself, the divine Person who welcomes humanity fully and for ever, the One in whom God and man are inseparably united for ever.
Man's being in God, this is Heaven.
And we draw close to Heaven, indeed, we enter Heaven to the extent that we draw close to Jesus and enter into communion with him. For this reason today's Solemnity of the Ascension invites us to be in profound communion with the dead and Risen Jesus, invisibly present in the life of each one of us."

Why is it a joyful event ? The Pope explained:

"[T]he Evangelist Luke says that after the Ascension the disciples returned to Jerusalem "with great joy" (24: 52).
Their joy stems from the fact that what had happened was not really a separation, the Lord's permanent absence: on the contrary, they were then certain that the Crucified-Risen One was alive and that in him God's gates, the gates of eternal life, had been opened to humanity for ever.
In other words, his Ascension did not imply a temporary absence from the world but rather inaugurated the new, definitive and insuppressible form of his presence by virtue of his participation in the royal power of God."

Why is the facade of San Frediano so remarkable and impressive ?
The Ascension of Christ is not a usual subject for a Church facade.
It is facade with a number of important messages. It is a facade which invites deep contemplation.
The above points mentioned by Pope Benedict would probably be enough to justify such a facade. But the Pope went on to discuss the Ascension further and cast light on why the Ascension of Christ is a particularly meet subject for a Church.
The subject would appear to give the impression that somehow Christ was temporarily absent from this world until The Last Judgment. That the Church`s role was to prepare the way for a Christ who has disappeared. It is, I suppose, a  variant of the argument about Christianity being similar to "pie in the sky when you die"
On the contrary the Pope asserted:

"[T]he historical character of the mystery of Christ's Resurrection and Ascension helps us to recognize and understand the transcendent condition of the Church which was not born and does not live to compensate for the absence of her Lord who has "disappeared" but on the contrary finds the reason for her existence and mission in the invisible presence of Jesus, a presence working through the power of his Spirit.
In other words, we might say that the Church does not carry out the role of preparing for the return of an "absent" Jesus, but, on the contrary, lives and works to proclaim his "glorious presence" in a historical and existential way.
Since the day of the Ascension, every Christian community has advanced on its earthly pilgrimage toward the fulfilment of the messianic promises, fed by the word of God and nourished by the Body and Blood of her Lord."