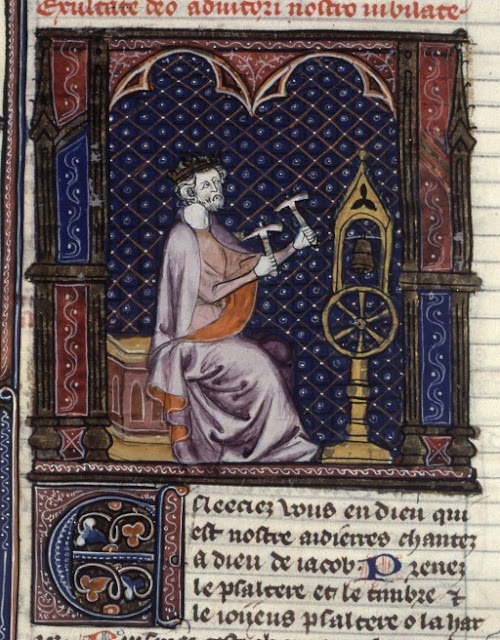 Last Wednesday, the Pope continued his catechesis on Prayer with a general talk about the Psalms
Amongst other things the Pope said:

"The book of the Psalter was given to Israel and to the Church precisely in order that the people of believers might be permitted to unite themselves to this song.
The Psalms, in fact, teach us to pray. In them, the Word of God becomes the word of prayer -- and they are the Psalmists' inspired words -- which also become the word of the one who prays the Psalms.
This is the beauty and the special nature of this biblical book: Unlike other prayers we find in sacred Scripture, the prayers contained [in the Book of Psalms] are not inserted into a narrative story which specifies either their meaning or their function.
The Psalms are given to the believer precisely as a text of prayer, which has as its one end that of becoming the prayer of the one who takes them up and, with them, addresses himself to God. Since they are the Word of God, he who prays the Psalms speaks to God with the very words that God has given to us; he addresses Him with the words that He Himself gives us. Thus, in praying the Psalms we learn to pray.
They are a school of prayer."

Over the ages the fact that the text of the Psalms becomes our word, the word of the one who utters the text can be illustrated by Psalm 122 (Psalm 121)
Here is the King James Version:

"A Song of Degrees of David"
1 I was glad when they said unto me, Let us go into the house of the LORD.
2Our feet shall stand within thy gates, O Jerusalem.
3Jerusalem is builded as a city that is compact together:
4Whither the tribes go up, the tribes of the LORD, unto the testimony of Israel, to give thanks unto the name of the LORD.
5For there are set thrones of judgment, the thrones of the house of David.
6Pray for the peace of Jerusalem: they shall prosper that love thee.
7Peace be within thy walls, and prosperity within thy palaces.
8For my brethren and companions' sakes, I will now say, Peace be within thee.
9Because of the house of the LORD our God I will seek thy good"

It was incorporated into Claudio Monteverdi`s Vespro della Beata Vergine 1610 (Vespers for the Blessed Virgin, 1610)

The opening words of Psalm 122: “What joy when they said to me, ‘We will go to the House of the Lord.’” is a traditional response to great State occasions of celebration and of national Thanksgiving
Recently the International Edition of l`Osservatore Romano reminded us of the importance of the Psalm in the history of St Paul`s Cathedral (the scene of many national celebrations):

"It was December 2, 1697, 31 years after the terrible fire which destroyed London. The reconstruction of St. Paul’s Cathedral had been accomplished so quickly that it was possible to celebrate a solemn mass of thanksgiving for peace following the Treaty of Ryswick. The English were no longer at war with the French and the peace agreement favored the English King, William III.
The Bishop of London, Henry Compton, dedicated his homily to Psalm 122: “What joy when they said to me, ‘We will go to the House of the Lord.’”
Compton preached that it was not only as Englishmen, but especially as Londoners, that the faithful present should give thanks to God who allowed them to finally erase the last traces of the destruction caused by the fire, and to pray in a place which had seen the devotion of many generations.
It was the fourth time that a church had been dedicated to the Apostle in that place. The first church had been built in 604 by King Ethelbert of Kent."