The son of encouragement 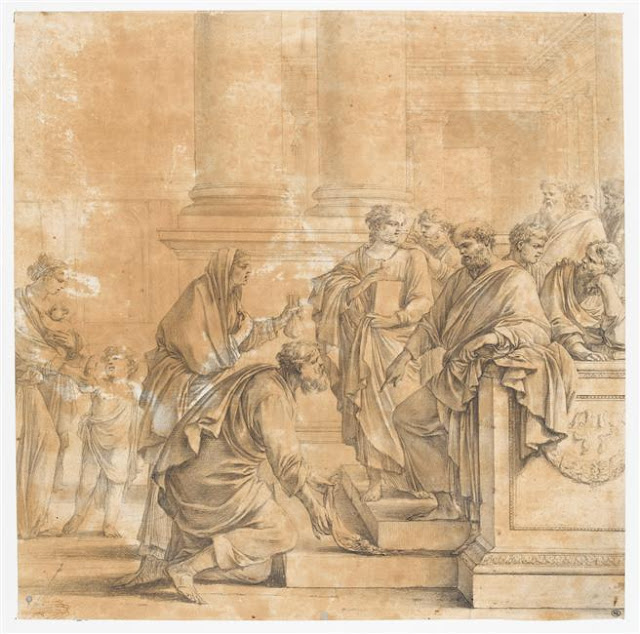 Laurent de La Hyre (1606-1656)
Le lévite Barnabas rapporte aux apôtres le prix de la terre qu'il a vendue
The Levite Barnabas brings to the Apostles the price of the land which he has sold
Gray ink, gray wash, beige paper, ink drawing
36.7 x 36.7 cm
Musée du Louvre, Paris (Département des Arts graphiques)
"Barnabas means "son of encouragement" (Acts 4: 36) or "son of consolation". He was a Levite Jew, a native of Cyprus, and this was his nickname. Having settled in Jerusalem, he was one of the first to embrace Christianity after the Lord's Resurrection. With immense generosity, he sold a field which belonged to him, and gave the money to the Apostles for the Church's needs (Acts 4: 37)."
(Pope Benedict XVI, General Audience Wednesday, 31 January 2007)
It is only by looking at the relevant part of Scripture do we begin to realise the import of this scene.
Acts 4: 32 - 37 makes it clear that Barnabas`s act was not unusual:

" 32 All the believers were one in heart and mind. No-one claimed that any of his possessions was his own, but they shared everything they had.
33 With great power the apostles continued to testify to the resurrection of the Lord Jesus, and much grace was upon them all.
34 There were no needy persons among them. For from time to time those who owned lands or houses sold them, brought the money from the sales
35 and put it at the apostles' feet, and it was distributed to anyone as he had need.
36 Joseph, a Levite from Cyprus, whom the apostles called Barnabas (which means Son of Encouragement),
37 sold a field he owned and brought the money and put it at the apostles' feet."

But immediately after this passage at the beginning of Chapter 5, we learn that this could be an act fraught with danger. The passage has been a source of consternation to Christians for generations. But the couple's fraudulent behaviour contrasts and highlights Barnabas' honesty and sincerity:

"Ananias and Sapphira
1 Now a man named Ananias, together with his wife Sapphira, also sold a piece of property.
2 With his wife's full knowledge he kept back part of the money for himself, but brought the rest and put it at the apostles' feet.
3 Then Peter said, Ananias, how is it that Satan has so filled your heart that you have lied to the Holy Spirit and have kept for yourself some of the money you received for the land?
4 Didn't it belong to you before it was sold? And after it was sold, wasn't the money at your disposal? What made you think of doing such a thing? You have not lied to men but to God.
5 When Ananias heard this, he fell down and died. And great fear seized all who heard what had happened.
6 Then the young men came forward, wrapped up his body, and carried him out and buried him.
7 About three hours later his wife came in, not knowing what had happened.
8 Peter asked her, Tell me, is this the price you and Ananias got for the land? Yes, she said, that is the price.
9 Peter said to her, How could you agree to test the Spirit of the Lord? Look! The feet of the men who buried your husband are at the door, and they will carry you out also.
10 At that moment she fell down at his feet and died. Then the young men came in and, finding her dead, carried her out and buried her beside her husband.
11 Great fear seized the whole church and all who heard about these events."
(Acts 5: 1 - 11) 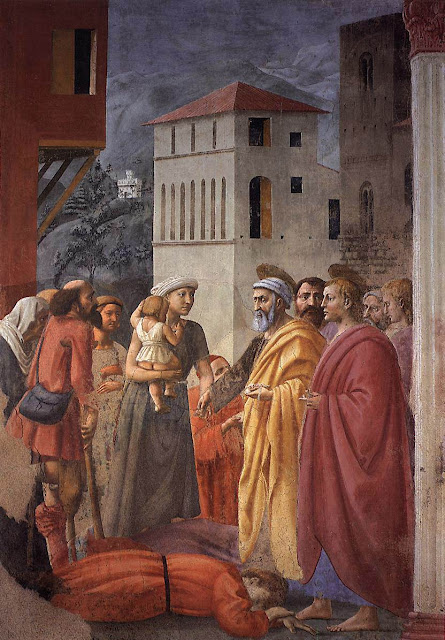 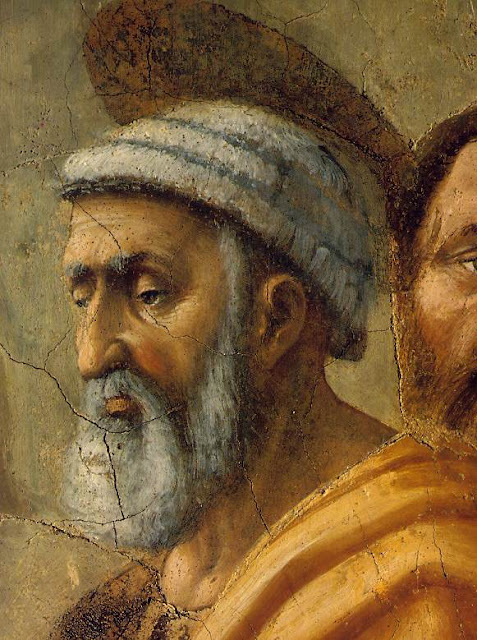 Masaccio (Tommaso Cassai) (1401-1427?)
The Distribution of Alms and the Death of Ananias
1426-27
Fresco
230 x 162 cm
Cappella Brancacci, Santa Maria del Carmine, Florence
The introduction of Barnabas in the narrative of Acts might seem at first rather pedestrian. But when seen against the narrative of Ananias and his wife, we realise that he is going to be a significant character in the history narrated by St Luke.
He is introduced as a Levite, set apart for ministry in the Lord`s house. He is generous. He was from Cyprus, part of the Jewish diaspora. He had contact with Gentiles. A man of faith, he gave up his possessions to become part of the Christian community in Jerusalem. He is re-named "the son of encouragement" or "the son of consolation". His is a gentle spirit not prone to negative criticism and a servant to the community spiritually.
As the Pope makes clear in his talk he becomes a significant figure in the early Church one of the main ones responsible for the spread of the Word to the Gentiles.
It is Barnabas who helps Paul when he returns to Jerusalem after his conversion when the other apostles are reluctant. He became the teacher in the Church of Antioch. He is the leader of the missionary journey which is now better known as Paul`s first missionary journey. It is he who gives John Mark another chance after he had left them, came back and Paul refused to take him along again.
He is one of the quiet unassuming Saints without whom the more voluble, single-minded and visible Saints would not have achieved what they eventually did.
Posted by Unknown at 8:57 pm