After the First Holy Communion 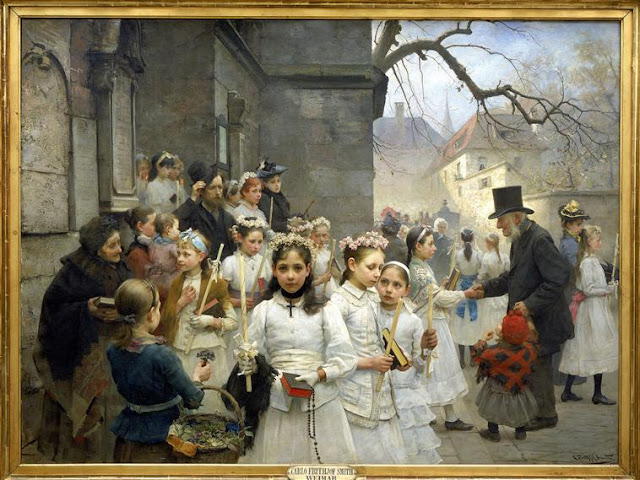 Carlo Frithjof Smith (1859-1917)
After the First Holy Communion 1892
Oil on canvas
Museo Revoltella, Trieste
Having been a teacher for two years in the Weimar, Smith presented this work to the Glasplast in Munich, Germany. It was a successful work in Munich when it went on show
It is a simple scene in the dying years of the nineteenth century. The setting is outside a country church. Outside the church is a crowd having exited after the celebration of First Holy Communion. Old and young mix. But there is a contrast between youth and age in the picture. There is difference but also continuity.
Smith was originally Norwegian. He steered a way between artists who insisted on painting in the open air and those artists who were more academic and classical.His great concentration on painting detail does not detract from his painting and analysis of an essentially very human and social scene
The time is before the reforms of Saint Pope Pius X who in 1910 lowered the age for first communicants, showing that the practice of First Communion for young children was not invented by Pope Pius X but a practice which he wished to greatly encourage and make a standard throughout the Church.
In 1910 as well as promulgating the rule for the Universal Church, he also declared Blessed Imelda Lambertini (1322 – May 13, 1333) as the patroness of First Holy Communicants.
Pius X chose Blessed Imelda as the patron because of her passionate desire for union with Christ through the Holy Eucharist. She had to struggle to be allowed to take her first Holy Communion.
First Holy Communion is of course still an important rite of passage within the Catholic Church. Although perhaps not quite having the same edge and excitement as it used to have even, say twenty years ago ?
There is new Italian film doing the rounds called Corpo Celeste (Heavenly Body). The director is Alice Rohrwacher and the film premiered at Cannes. It does not deal with First Holy Communion but with the sacrament associated with it and given at about the same age: Confirmation.
It deals with the important issue of the spiritual awakening of children at that age and how often these desires for a real experience with Christ might be hindered by many obstacles outwith their control.
Marta is a young girl who is preparing for Confirmation. Her family, originally from Calabria, lived most of their lives in Switzerland. Marta and her family come back to Calabria. She does her preparation for the sacrament in a small town in Calabria in the South of Italy.
The review by Lucetta Scaraffia in the International Observatore Romano praises the film as deep and intense. The reviewer does not attempt to whitewash the failings of the Church in a rather desolate situation:

"In the film, Corpo Celeste
The search for Jesus
Italian cinema has lately shown significant interest in the Catholic Church, making it the subject of several films.
Without a doubt, this is a sign of renewed curiosity and the undeniable relationship between Italian culture and Catholicism, quite apart from debate and polemics which also characterize it.
Nanni Moretti’s Habemus Papem drew attention because it addresses the theme of the election of a Pope which always attracts general curiosity, but the debut of Alice Rohrwacher’s, Corpo Celeste (Heavenly Body) is far more intense and interesting.
The film premiered at Cannes and is about the situation of the Church and the faithful in Calabria, a beautiful region but one that is devastated by a monstrous process of modernisation.
The theme is developed through the eyes of Marta, a young girl who is preparing for Confirmation and whose family, originally from Calabria, lived most of their lives in Switzerland.
The distance and difference between the two cultures, through the eyes of the protagonist, provides a foil for the most grotesque and impoverished aspects of a reality that is culturally and religiously backwards. Yet it also expresses a young and confused girl’s genuine need for a true encounter with Jesus.
In fact, even though it takes a critical look at the reality of a local Church and its priests who are part of a serious human degradation – the scenes of the ‘dance of the virgins’ preparing for Confirmation in which little girls with long blue dresses ingenuously move their bodies in a sexual way is bitterly brilliant – the film also tells of a different reality.
In these social and cultural conditions, effectively represented by scenes of the depressing outskirts of town, the Church remains the only institution which gives an identity, offering a collective context in which to find oneself in community. It is the only foothold for critical times and material assistance in cases of difficulty.
The scenes of a procession, lessons in preparation for Confirmation, the modest figure of the parish priest – in many respects a good person but absolutely disinterested in either the formation of the children or the life of the parish – seem to indicate how much the response of the Church is often inadequate to the enormous needs of a weak and fragile society.
In the film the parish priest is only concerned with electoral propaganda and his cell phone, which rings incessantly, in the hopes that it brings him much-desired news of a promotion that takes him far from here, in a position more favorable to the ecclesiastic career to which he aspires.
Meanwhile, the ignorant simplicity of the catechist transforms the Confirmation course into a sort of pathetic clowning-around.
But the young girl’s desire for a sincere religious experience represented by her questioning everyone what Jesus’ last words on the cross meant – words they had been taught in an ancient and mysterious language – opens the way to a hope which takes on the face of Jesus.
It is the parish priest who decides to exchange the horrible neon crucifix hanging in the ugly modern church with another “figurative” one, which although it echoes the art market jargon, nonetheless has the power of a real sacred presence, as Marta recognises.
Even though the crucifix – taken from an ancient abandoned town, where the bitter beauty of nature meets the poor but human architecture of the homes – is lost during transport, the sincere question of encountering Jesus, asked by the community that gathers in the insignificant building of the parish, is not lost.
A question represented with all of the strength of its simplicity by the protagonist. Although she runs away before Confirmation, turned away by the weak context of the local Church, the film opens the heart to hope. Jesus, the one represented by the “figurative” crucifix – the only sacred object which allows one to recognize him and begin a relationship with him – is still alive in the deep layers of our society and culture.
So long as we know how to look for him.
Lucetta Scaraffia
June 8, 2011"

Here is the trailer. Watch out for the neon crucifix in the Church ! It is delightfully "naff" and reminds one of a sign in a supermarket.
Posted by Unknown at 6:36 pm