The Apostle James: The Suffering Servant 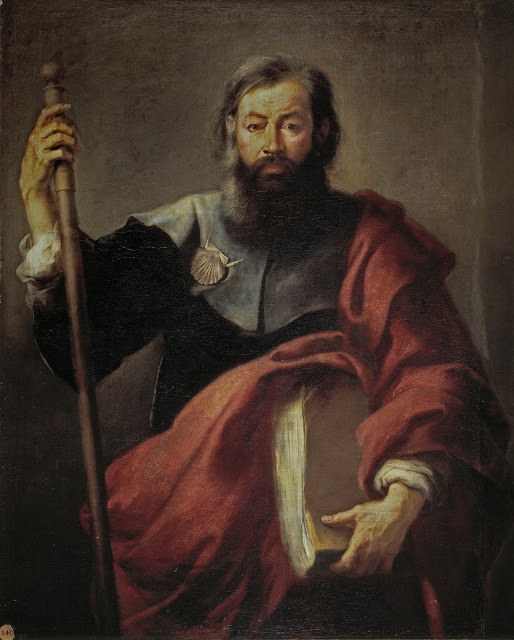 
This is only one of many depictions in the Prado of the Apostle Saint James, the Patron Saint of Spain

Bartolomé Esteban Murillo was the leading exponent of the seventeenth-century Sevillan school, which was known for its seamless blend of realism and sentimental beauty in painting.

One of the earliest called by Jesus, he was one of the Boanerges ("sons of thunder") and brother of the apostle John. He was one of the three apostles who were witnesses of The Transfiguration

James suffered martyrdom in AD 44 at the hands of Herod Agrippa, being the first apostle to suffer martyrdom

Murillo presents an image of a strong and upright man but no longer in the flush of youth. But it is his face and in particular his eyes which is the central feature of the painting.

His eyes show someone not filled with temper and vehemence but of anxiety and, perhaps, of fatigue and worn down slightly by cares and responsibilities. But something impels him on

But it is a portrait of someone who is no longer the man who when the Samaritans refused to receive Christ, asked:

"Lord, wilt thou that we command fire to come down from heaven, and consume them?"

The worldly ambition has gone. So has the ideological zeal.

In Matthew 20 his mother pushed him and his brother forward to Jesus and got them to ask to sit at either side of Jesus in his kingdom. He and his family thought that the kingdom which Jesus spoke about was of this earth and time. They thought it was about power. They (like the rest of the Apostles) did not understand.

"The Request of James and John.

20 Then the mother of the sons of Zebedee approached him with her sons and did him homage, wishing to ask him for something.
21 He said to her, “What do you wish?” She answered him, “Command that these two sons of mine sit, one at your right and the other at your left, in your kingdom.”
22 Jesus said in reply, “You do not know what you are asking. Can you drink the cup that I am going to drink?” They said to him, “We can.”
23 He replied, “My cup you will indeed drink, but to sit at my right and at my left [, this] is not mine to give but is for those for whom it has been prepared by my Father.”
24 When the ten heard this, they became indignant at the two brothers.
25 But Jesus summoned them and said, “You know that the rulers of the Gentiles lord it over them, and the great ones make their authority over them felt.
26 But it shall not be so among you. Rather, whoever wishes to be great among you shall be your servant;
27 whoever wishes to be first among you shall be your slave.
28 Just so, the Son of Man did not come to be served but to serve and to give his life as a ransom  for many.”

For Christ,  authority is rendered as service to others  rather than for personal aggrandisement

James`s "reward" is to be a share in Jesus’ sufferings, the endurance of tribulation and suffering for the Gospel

Rather than despising the Samaritans and wishing to destroy them, after the Crucifixion and Resurrection, the Apostle James  became  the Good Samaritan, a sharer in the sufferings of others (See Salvifici Doloris)