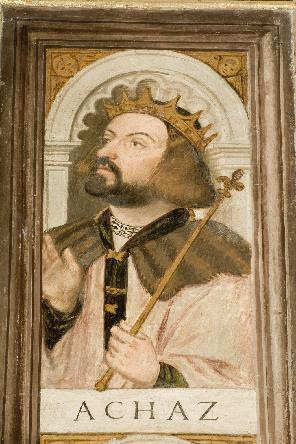 
King Ahaz was not what anyone would call a good King

He was king of Judah, and the son and successor of Jotham

He was 20 when he ascended the throne and reigned for 16 years, dying about 716 BC

Perhaps his wickedest deed was sacrificing his own son, likely to have been Rimmon.

He also added an idolatrous altar into the Temple.

He sold his country down the river to the Assyrians

He was so wicked that when he died "they did not bring him to the tombs of the kings of Israel."

They attempted to erase him from history, from the collective memory

Hence a depiction of Azah in art is extremely rare  Even in the Sistine Chapel, his depiction is hidden in a lunette shown as  child beside his father Jotham

He ignored the remonstrances and warnings of the prophets Isaiah, Hosea, and Micah

It is only because the genealogy in Matthew mentions him as an ancestor of Christ that he occupies a very small place in art in churches - a very minor footnote whose only partial redemption is through a remote, very remote connection to Christ

The prophet Isaiah is preaching to Ahaz at the command of God. At Isaiah 7:9, the prophet says:

"Unless your faith is firm, you shall not be firm!"

In a Ratzingerian passage on the relationship between Faith and Truth,  Pope Francis and Pope Benedict write:

23. Unless you believe, you will not understand (Si non credideritis, non intellegetis)
(cf. Is 7:9).

The Greek version of the Hebrew Bible, the Septuagint translation produced in Alexandria, gives the above rendering of the words spoken by the prophet Isaiah to King Ahaz.

In this way, the issue of the knowledge of truth became central to faith.

The Hebrew text, though, reads differently; the prophet says to the king:

"If you will not believe, you shall not be established".

Here there is a play on words, based on two forms of the verb ’amān: "you will believe" (ta’amînû) and "you shall be established" (tē’āmēnû).

Terrified by the might of his enemies, the king seeks the security that an alliance with the great Assyrian empire can offer.

The prophet tells him instead to trust completely in the solid and steadfast rock which is the God of Israel.

Because God is trustworthy, it is reasonable to have faith in him, to stand fast on his word.

He is the same God that Isaiah will later call, twice in one verse, the God who is Amen, "the God of truth" (cf. Is 65:16), the enduring foundation of covenant fidelity.

It might seem that the Greek version of the Bible, by translating "be established" as "understand", profoundly altered the meaning of the text by moving away from the biblical notion of trust in God towards a Greek notion of intellectual understanding.

Yet this translation, while certainly reflecting a dialogue with Hellenistic culture, is not alien to the underlying spirit of the Hebrew text.

The firm foundation that Isaiah promises to the king is indeed grounded in an understanding of God’s activity and the unity which he gives to human life and to the history of his people.

The prophet challenges the king, and us, to understand the Lord’s ways, seeing in God’s faithfulness the wise plan which governs the ages.

Saint Augustine took up this synthesis of the ideas of "understanding" and "being established" in his Confessions when he spoke of the truth on which one may rely in order to stand fast:

"Then I shall be cast and set firm in the mould of your truth".

From the context we know that Augustine was concerned to show that this trustworthy truth of God is, as the Bible makes clear, his own faithful presence throughout history, his ability to hold together times and ages, and to gather into one the scattered strands of our lives.

24. Read in this light, the prophetic text leads to one conclusion: we need knowledge, we need truth, because without these we cannot stand firm, we cannot move forward.

Faith without truth does not save, it does not provide a sure footing.

It remains a beautiful story, the projection of our deep yearning for happiness, something capable of satisfying us to the extent that we are willing to deceive ourselves.

Either that, or it is reduced to a lofty sentiment which brings consolation and cheer, yet remains prey to the vagaries of our spirit and the changing seasons, incapable of sustaining a steady journey through life.

If such were faith, King Ahaz would be right not to stake his life and the security of his kingdom on a feeling.

But precisely because of its intrinsic link to truth, faith is instead able to offer a new light, superior to the king’s calculations, for it sees further into the distance and takes into account the hand of God, who remains faithful to his covenant and his promises.

25. Today more than ever, we need to be reminded of this bond between faith and truth, given the crisis of truth in our age.

In contemporary culture, we often tend to consider the only real truth to be that of technology: truth is what we succeed in building and measuring by our scientific know-how, truth is what works and what makes life easier and more comfortable.

Yet at the other end of the scale we are willing to allow for subjective truths of the individual, which consist in fidelity to his or her deepest convictions, yet these are truths valid only for that individual and not capable of being proposed to others in an effort to serve the common good.

But Truth itself, the truth which would comprehensively explain our life as individuals and in society, is regarded with suspicion.

Surely this kind of truth — we hear it said — is what was claimed by the great totalitarian movements of the last century, a truth that imposed its own world view in order to crush the actual lives of individuals.

It would be logical, from this point of view, to attempt to sever the bond between religion and truth, because it seems to lie at the root of fanaticism, which proves oppressive for anyone who does not share the same beliefs.

In this regard, though, we can speak of a massive amnesia in our contemporary world.

The question of truth is really a question of memory, deep memory, for it deals with something prior to ourselves and can succeed in uniting us in a way that transcends our petty and limited individual consciousness.

It is a question about the origin of all that is, in whose light we can glimpse the goal and thus the meaning of our common path"

One has to say that as a criticism of modern society and politics, there can be no harsher judgment